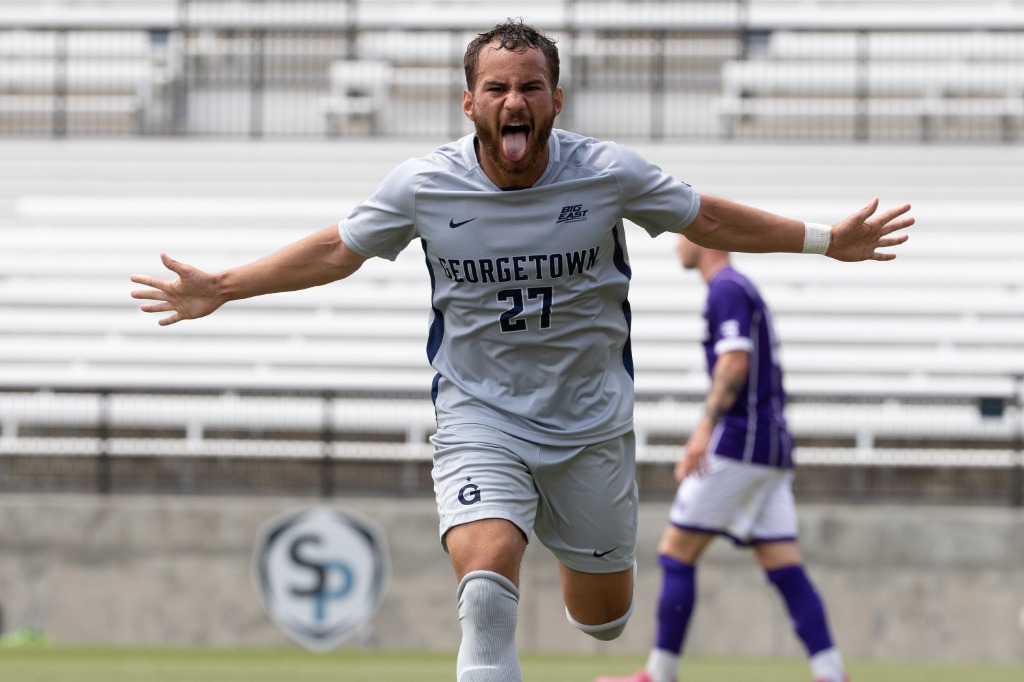 No. 7/5 Georgetown men’s soccer (9-1-2, 7-0-2 Big East) moved on to the Sweet Sixteen of the NCAA College Cup after decisively shutting down the No. 22/14 High Point University Panthers (12-2-0, 8-0-0 Big South) and their top-ranked offense on Sunday, May 2 at Matthews Sportsplex in Matthews, North Carolina. The Hoyas imposed themselves impressively, scoring one goal in each half by junior midfielder Zach Riviere and freshman midfielder Chris Hegardt respectively, while keeping sophomore forward MD Myers, the 2nd leading goal scorer in the country, to no goals and very few opportunities.

Georgetown started slow but steady and in control. The first twenty minutes of the opening half were characterized by a Hoyas squad methodically passing the ball, controlling possession, and looking for space to create chances in the offensive end. High Point tried to match the Hoyas on several occasions by looking to hold on to the ball, but Georgetown head coach Brian Wiese’s trademark high press made it nearly impossible for the Panthers to do so, as they constantly turned the ball back over to the Hoyas.

Georgetown’s first penetration offensively was a quick solo run by senior midfielder Paul Rothrock where it looked like he might have been clipped and brought down in the box by a Panthers defender, but no call was made and the play led to the first corner kick opportunity of the game. As the match progressed, play began to open up as Georgetown generated several dangerous opportunities 20 minutes in. Sophomore forward Will Sands put in a beautiful cross which bounced out to the top of the box for sophomore midfielder Dante Polvara, who sent his shot just over the net.

The Hoyas’ first goal came in the midst of this flurry of opportunities. Sands sent a quick pass out to the right where Rothrock trapped the ball and laid it off to Hegardt, who sent in a looping ball from the corner of the box that found Riviere, who finished with a clean and speedy header all alone in front of the High Point net.

The Panthers followed up by trying to push up and create chances of their own. High Point’s clearest opportunities were individual moments of brilliance, each of which were stopped decisively by junior goalkeeper Giannis Nikopolidis. Junior midfielder Alex Abril and Myers both made impressive solo runs for the Panthers, which were shut down by even more impressive saves from Nikopolidis.

Rothrock had a clear close range header 30 minutes into the match, but High Point redshirt sophomore goalkeeper Holden Trent parried it away impressively as the match began to open up a bit more offensively.

Freshman midfielder John Franks impressed with his rapid speed in his 30 minutes of action. Using his quickness, he caught the High Point backline sleeping as he ran right around them down the left wing and got in on a one-on-one opportunity vs. Trent from a tough angle; the shot went just wide, rolling off to the right of the far post. High Point would follow up this opportunity with a bit of individual skill of their own, as Abril would once again show a beautiful bit of skill to move to his left and take a tough shot contested by Sands, who forced the ball safely away from the goal.

The second half started much like the first, as the Hoyas picked up where they left off by controlling possession and the flow of play, as they would earn a corner kick opportunity just two minutes into the half. Junior midfielder Sean Zawadzki, playing out of position at center back after the departure of Rio Hope-Gund to MLS side Orlando City, made clean contact off the corner served in by Riviere but Trent made yet another fantastic diving save.

Georgetown would not be denied though, as their second and final goal of the game came immediately after. Hegardt received a low, driven cross from Riviere and caught Trent stumbling in the wrong direction, leaving an easy finish for Hegardt who shot it low to the left. Riviere’s assist had been coming, as his chance creation was impressive all game.

High Point seemed to understand they needed to create offense urgently. The Panthers would get their first corner kick of the game 10 minutes into the second half. The only thing they got out of the opportunity was another corner kick which was cleared easily by the stifling Hoyas defense. High Point did begin to string together some nice passes, creating two clear chances for senior midfielder Mason Marcey from the top of the box, neither of which ended up on frame to test Nikopolidis.

Polvara had a great solo run for the Hoyas, taking a tough shot which was saved by Trent, as Georgetown once again began to control possession 15 minutes into the half while keeping High Point’s electric offense from getting any meaningful opportunity going. The Panthers next dangerous opportunity came with only 15 minutes left in the half, as freshman forward Caco Fernandez made a strong push down the left wing, cut in, and sent a beautiful shot just over the top right corner of the Hoyas’ net.

The Panthers were trying to push up and create chances down 2-0 with only 10 minutes left, but they were clearly struggling and getting visibly frustrated as the Hoyas began to play a bit more defensively. The closing minutes of the game were characterized by Georgetown committing to the possession game, almost inviting the Panthers to press them as the ball was pushed around well in the Hoyas midfield to close out a decisive victory and an impressive shutout against the best offensive team in the country, averaging 2.93 goals per game.