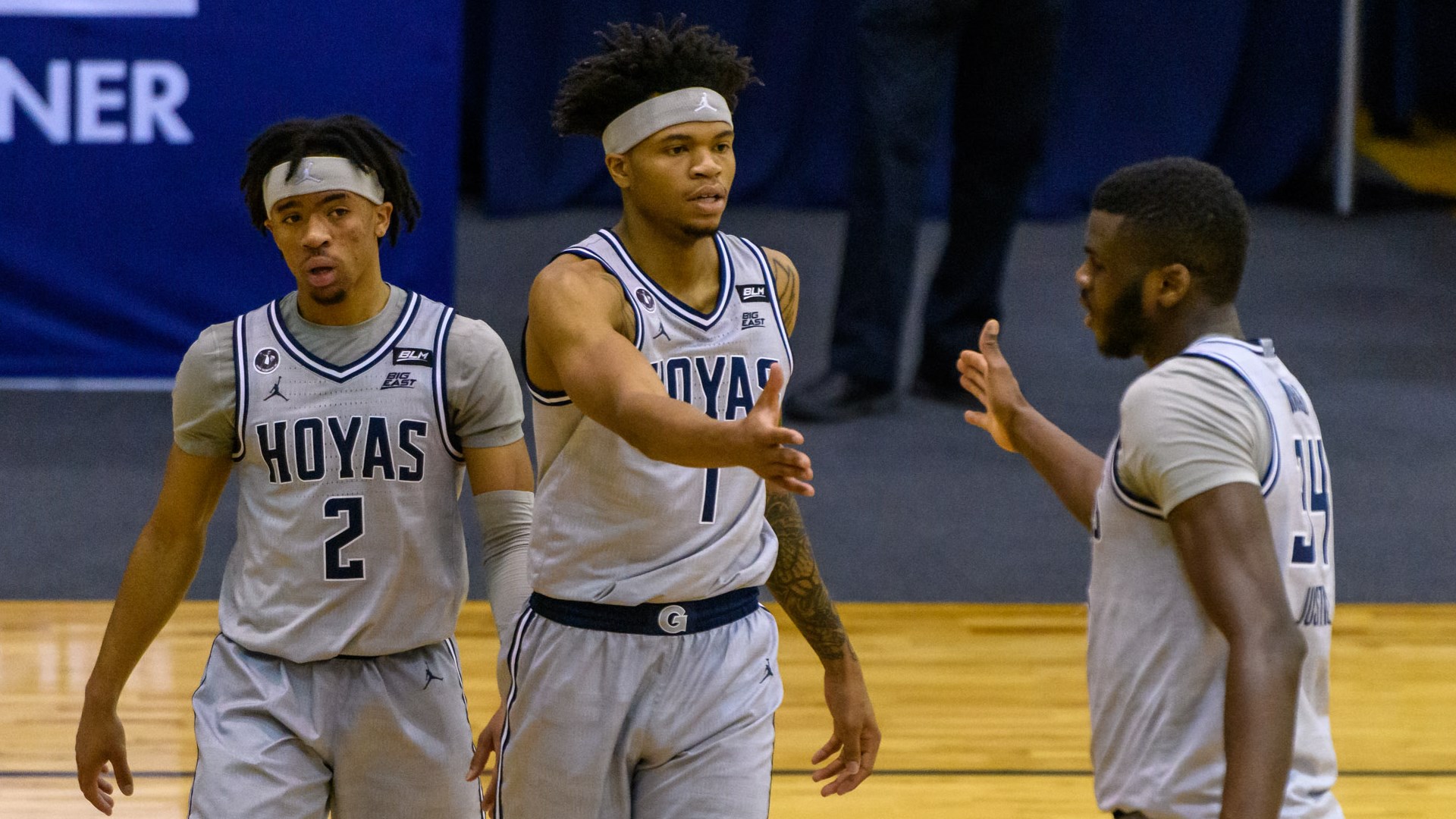 The Georgetown Hoyas men’s basketball team (11-12, 9-9 Big East) upset the Big East’s number one seed, defeating the No. 14 Villanova Wildcats (16-6, 11-5 Big East) to advance to the Big East Tournament semifinals for the first time in 6 years. Georgetown’s 72-71 win knocks out the three-time defending Big East champions as Georgetown advances to play the winner of St. John’s and Seton Hall.

The Hoyas were led by freshman guard Dante Harris, who knocked down the game-winning free throws and finished the game with 18 points (16 in the second half), 5 assists, and 0 turnovers. Despite fouling out in the final minute, sophomore center Qudus Wahab poured in 17 points and 6 rebounds to aid in the Georgetown win. Sophomore forward Jeremiah Robinson-Earl and senior forward Jermaine Samuels led Villanova with 26 points and 20 points respectively, but head coach Jay Wright’s squad  missed their star senior Collin Gillespie, who is out with an MCL injury.

“5 assists, no turnovers. That’s huge. That’s huge,” said Ewing of Harris’ outstanding performance. “He’s growing up. He was put in a position where we didn’t think he would have to be. There was growing pains but he’s stepped up and been magnificent.”

The Hoyas were able to keep Villanova off the boards enough to deliver a 37-30 rebounding advantage, but their efficiency from the line (23-23 on FTs) compared to Villanova (14-22 on FTs) – including in the clutch – is what pushed Georgetown over the Wildcats. Despite outscoring the Hoyas in the paint 30-16, Villanova struggled from beyond the arc as they ended up making  only 9 of 30 from three (30%) compared to their season average of 35.5%.

After winning the tip, Villanova immediately went into their spread motion offense and got a quick bucket to start the game. Samuels helped the Wildcats jump out to a 9-0 lead by scoring the first 6 points of the game, as Villanova’s swarming press defense forced the Hoyas into early turnovers. After an early timeout from Georgetown head coach Patrick Ewing, however, the Hoyas were able to bounce back with a 11-0 run of their own to take the lead.

With Villanova lacking a true center on their roster, the Hoyas looked to feed sophomore big man Qudus Wahab early, as he accounted for 7 of their first 13 points. However, what Villanova lacked in size, they made up for in deflections as their full-court press defense was able to force 4 Hoya turnovers by the 10 minute mark. Meanwhile, the Hoyas were unable to force any Villanova turnovers until the 8:17 mark in the first half.

Neither team started well from 3 (GU 1-6, VU 1-11) until senior guard Jahvon Blair was able to hit threes on back-to-back possessions, preventing Villanova from gaining any major separation. Samuels, who checked out earlier with 2 fouls, came back into the game and answered right back with 2 triples of his own to bring him up to 14 first half points.

Villanova’s inability to hit a three in the first half (3-19) was surprising for a team that entered the game shooting 35.5% from deep. The Wildcats were able to take a 35-30 lead with 3:25 left in the half, but from that point forward, there may as well have been a lid on Villanova’s basket as they went 0-8 from the field (0-5 from 3) to end the half. Georgetown, meanwhile went on a 7-0 run to take a 37-35 lead as the first half came to an end.

“Some nights your shots just don’t go. And it’s something we’ve been struggling with this year,” said Villanova head coach Jay Wright.

The story of the first half, besides Villanova being cold from deep was the 21-20 GU advantage on the glass. Coming off a dominant performance in the paint against Marquette, Georgetown entered the game with the 3 tallest players, including star center Wahab. Yet he finished the first half with exactly zero rebounds, with the shorter Villanova team not allowing the Hoyas to control the boards.

Whatever funk Villanova’s shooters were in at the close of the first half lifted in the second half as the Wildcats exploded out of the gate with a 12-2 run over the first 4:31. Their advantage in the paint continued as 8 of the 12 points came from that area of the floor.

Harris was able to keep Villanova from putting the game out of reach, however, as the young guard poured in 7 points to make the score a 49-46 Villanova lead. Georgetown was not able to sustain this brief hot streak as Villanova entered a 9-2 run to push the lead out to double digits for the first time as the game approached the midpoint of the second half.

It appeared as if Villanova was about to put the game out of reach, but Georgetown entered into a full-court press defense to attempt to bait Villanova into several turnovers. The press defense had mixed success as Villanova proved extremely averse to turnovers, but Georgetown was able to string together a few defensive stops along with clutch buckets from Harris, Blair, and senior forward Jamorko Pickett to claw back into the game with a 13-1 run and give the Hoyas a 63-62 lead with 5:01 to go.

“I told my guys to never give up,” said Harris. “We just continued to stay together and fight together, and we can beat anybody.”

Multiple players from both sides would deal with foul trouble in the closing sequences, with senior forward Chudier Bile fouling out for Georgetown, sophomore guard Justin Moore fouling out for Villanova, and Wahab picking up his 4th. Sophomore forward Jeremiah Robinson-Earl – Big East co-player of the year – made his presence known in crunchtime with two free throws to end Georgetown’s 13-1 run and a big three to put his team up 70-65 with under 2 minutes to go. Despite the 4 fouls, Wahab continued to go to work with an emphatic and-one slam to tie the game at 70 a piece with 41 seconds left. However, Robinson-Earl was able to bait Wahab into a 5th foul on the next play and hit a free throw to give Villanova a 1 point lead with 18 seconds to go.

After a timeout, Georgetown ran a sideline out of bounds play that got Harris going downhill towards the basket where he would draw the foul with 4.7 seconds remaining. Harris calmly knocked down two clutch free throws to give the Hoyas a 72-71 lead, and Georgetown was able to hold on to defeat the three-time defending Big East champions.

The Hoyas rebounded much more effectively in the second half – a 16-10 rebounding advantage – with Wahab alone grabbing 6 boards. Despite Georgetown’s foul trouble, the Wildcats were not able to capitalize, going only 14-22 from the charity stripe compared to a perfect 23-23 from the Hoyas – a record number of free throws in the Big East Tournament without a miss. Additionally, Villanova’s struggles from beyond the arc prevented them from sustaining any real separation and kept Georgetown within striking distance.

“I’m extremely proud. A lot of people have counted us out. We struggled in the early part of the year,” said Ewing. “It took us some time to adjust. We had some new faces on our team. I think after we came out of that Covid pause, things clicked and gelled for us.”

Georgetown advances to the semifinals in the Big East Tournament, which will  tip off tomorrow at 6pm on FS1. They will face the winner of the Seton Hall Pirates (13-12, 10-9 Big East) and the St. John’s Red Storm (16-10, 10-9 Big East), who play this afternoon.  For coverage of men’s basketball and all Georgetown sports, follow @GUVoiceSports on Twitter. 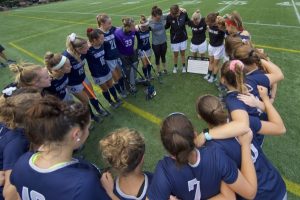