Updated on July 9 to include the return of students to New South.

Approximately 40 students and others residing in the New South building were evacuated from the building on Tuesday, July 6th, while a structural engineer reviewed and began possible renovations of the lower part of the building, according to a university spokesperson. The students were then informed they could return to their residences Friday, July 9th.

Students residing in New South were first notified via an email sent at approximately 5 p.m. on Tuesday that they were to gather anything they needed for the rest of the week by 10 p.m. that evening and to check-in at the Georgetown University Hotel & Conference Center, where they would be provided with a room and temporarily relocated. According to the email, the same-day relocation was to “ensure the project can begin on time.” After 10 p.m., the students were not able to access their rooms.

The structural engineer was brought in to “review building conditions,” according to the email sent to students living in the dorm. “Out of an abundance of caution, we will be relocating New South residents until the analysis is complete and any needed reinforcements are made to ensure the safety of the building,” the email reads.

According to a university spokesperson, no students participating in the Summer Hilltop Immersion Program (SHIP) were housed in the New South building. However, students involved in Georgetown Emergency Response Medical Service (GERMS) on campus this summer were forced to relocate.

“There were around 40 of us living in New South when we were notified of the evacuation, and we each moved varying amounts of our belongings to the Georgetown University Hotel that night,” the GERMS Public Relations team wrote in a statement to the Voice. “All of us are settled in the hotel where we are each in an individual room and have been provided a refrigerator/microwave unit.”

Since these students no longer had access to their common room kitchens, the university provided those who did not already have a meal plan in place with access to Leo O’Donovan Dining Hall for this week and weekend at no cost. “We are appreciative of the alternative accommodations they have made for us,” the GERMS Public Relations team wrote. The GERMS team assured that despite the relocation, there has been no disruption to their ability to provide their services. “No matter where we are housed, we are committed to serving our community with high quality emergency medical care and transport.”

Three days after the evacuation, New South residents were notified via email once more that they could safely return to the building, starting at 5 p.m. that day. According to the email acquired by the Voice, the review of New South found that concerns regarding building conditions were limited to a vacant space on the basement floor that did not impact the safety or structural integrity of the building as a whole.

Following the report from the structural engineer, the university engaged a second opinion to confirm the safety of New South. “We are confident that the building is safe for our students to live, learn and dine in,” the email read.

The students who were relocated to the Georgetown Hotel have until noon on Monday, July 12 to check out of their rooms, and those without meal plans can continue to utilize Leo’s through the weekend.

“While we worked to make your relocation as seamless as possible, we apologize for any disruption and concern it may have caused,” the email to New South residents added. “Our decisions have been and will continue to be guided by the safety of our community.” 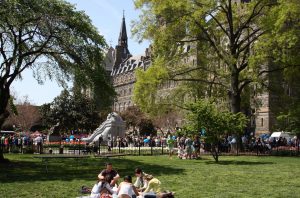