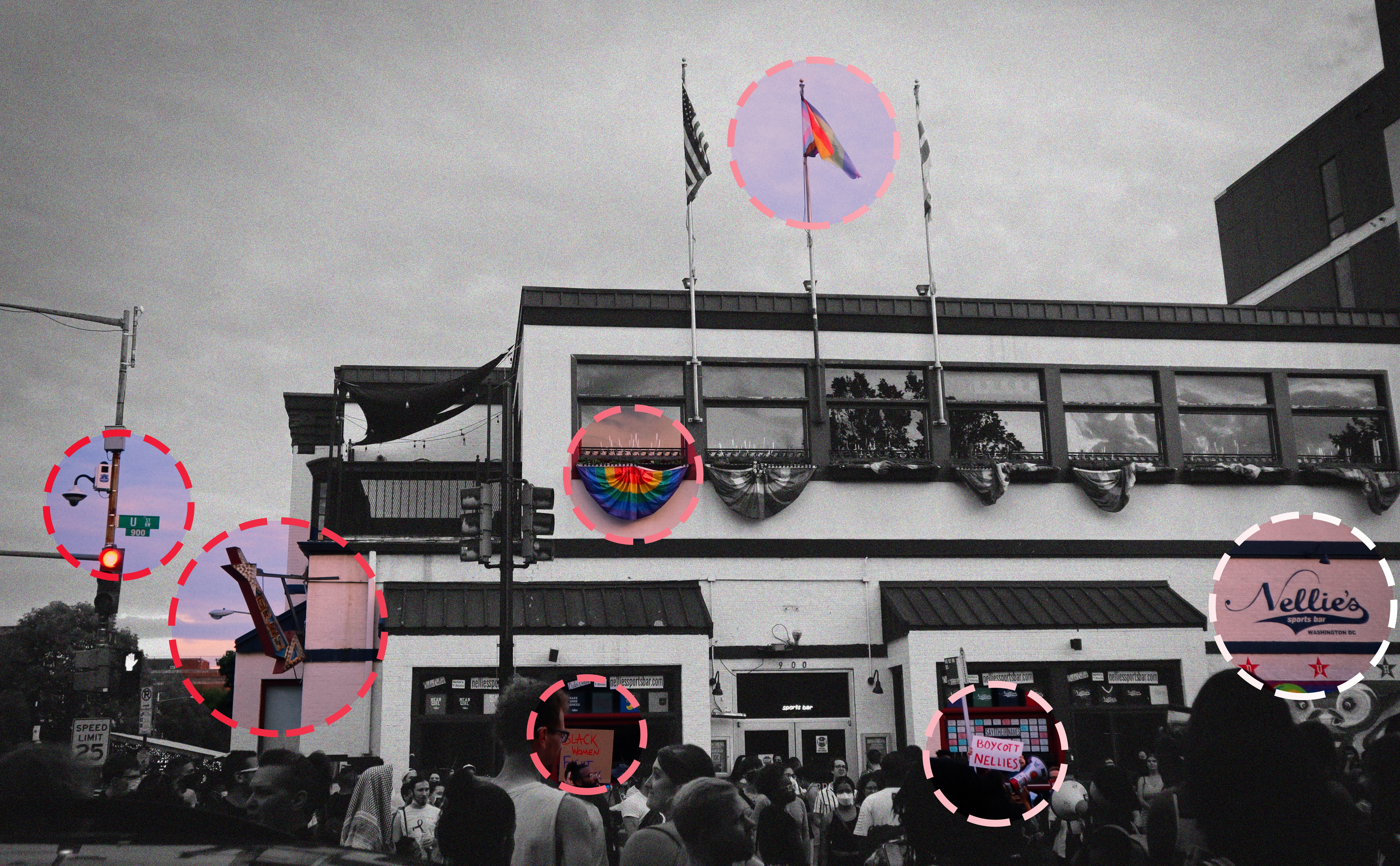 Illustration and Photo by Max Zhang.

CW: This article references violence to Black and LGBTQ+ individuals and communities.

Nellie’s reopened and broke a month-long public silence following their closure on June 13, the day after Keisha Young, a 22-year-old Black woman, was dragged out of the bar head-first by Nellie’s security.

Nellie’s statement, posted to social media and emailed to the Voice on July 16, included an apology to Young (the first time the establishment made one), as well as commitments to make Nellie’s “a safe and welcoming space for all of our guests.” However, organizers of the boycott maintain the bar has yet to meet several of their initial demands, nor has it addressed its history of anti-Black racism. The bar’s anti-Black past behavior includes discriminatory treatment of Black patrons and unfairly monetizing Black culture despite a lack of care for the U Street community Nellie’s is a part of.

The original five demands, released to the public a month ago, were a public apology to Young, a public community listening session, paying staff during the boycott, the release of the full video footage of Young being dragged out the bar, and reparations to D.C.’s Black, queer, and trans community. Included in this list was a stipulation that Nellie’s not reopen until all the demands were met. According to Preston Mitchum, a co-chair of the board of directors of Collective Action for Safe Space (CASS), a Black trans, queer, and non-binary-led organization working to build community safety, and one of the lead organizers of the #boycottNellie’s movement, only the request to pay staff was met before Nellie’s reopened, with the apology to Young coming a few days later.

“That’s why we are continuing our efforts to no longer go to Nellie’s, because for us they have not really responded in a non-performative way to actually be accountable for any actions,” Mitchum said in an interview with the Voice. Nellie’s did not respond to a request for additional comment about the unmet demands or their reopening plan.

While the video of Young being dragged down the stairs ignited last month’s protests, this incident was just the latest in a string of reported racist incidents at the popular U Street gay bar, which Mitchum has been critiquing since 2017. After protesters blockaded Nellie’s the day following Young’s removal, calling for them to close permanently, the bar announced they terminated the services of the security vendor responsible for the violence against Young and would be closed for the coming week.

The bar remained shuttered until July 12, but its reopening was not noticed until the next day. As patrons re-entered the bar, the hashtag #boycottNellie’s began trending again, and around 50 protestors eventually arrived to form a human chain blocking the entrance. Makiah Green, a co-conductor with Black-led abolitionist group Harriet’s Dreams, told the DCist that by 9 p.m., no more patrons were entering the bar, which was empty by 10 p.m. Nellie’s has been open for business most days the past week, which was met with another protest on July 16.

During their closure, Nellie’s reports to have worked to address the violence against Young. Yet Mitchum and other organizers noted that at no point during this month did the bar reach out to the community or Young, and that they only broke their silence in response to a publically-released statement by CASS that Nellie’s requested a workshop from the group on tools to intervene in conflict situations. CASS denied the request, citing the four unmet demands and the fact Nellie’s had yet to engage the community. The organization also expressed concern that the training was only requested in response to the violence against Young alone, rather than the bar’s history of anti-Black racism.

“It is futile, and quite frankly impossible, to provide training to a bar that refuses to be accountable to the community it serves,” the CASS letter, which was also sent to bar owner Doug Schantz, read. “Nellie’s must accept the reality that many Black queer patrons have attempted to speak about for years and met with much resistance: many of us do not feel safe in your establishment.”

A few hours after CASS released their letter, Nellie’s posted their own statement, including the apology to Young. According to the statement, signed by Schantz “and the Nellie’s family,” the bar conducted “a thorough review of the incident” and added “additional resources so that nothing like this happens in the future.” Nellie’s did not respond to a request for comment on what this entailed.

The establishment specifically committed to continuing to donate to “diverse organizations,” claiming they had already donated over $1 million to the community, continuing to provide free meals to first responders, creating a customer feedback page on their website, and implementing conflict de-escalation training for all managers and staff.

The bar also hired their first director of community engagement, Ruby Corado. Corado is the executive director of Casa Ruby, a D.C.-based non-profit community organization providing services to the LGBTQ+ community, with a focus on bilingual and multicultural services. Corado, according to the statement, will be in charge of making sure “all of Nellie’s staff receive ongoing diversity sensitivity and inclusion training — with a focus on the concerns of LGBTQ+ people of color.”

Organizers immediately raised concerns that Corado, a transgender Latina woman, is not the right person to engage with the community, since Nellie’s history of racism has been predominantly anti-Black racism, something a Black person would be more suited to address.

“It’s even more infuriating to have our calls for Black LGBTQ led accountability, reparations, and transformation to be ignored and scapegoated by a non-Black leader in the queer community,” a statement from Harriet’s Dreams read.

Corado acknowledged frustration on the part of organizers at her appointment. “I want to be respectful with the fact that I am not a Black woman and I know part of the issue is that they do want to see Black voices,” she told the Voice, adding that to her understanding, Nellie’s had reached out to other candidates before bringing her on board. In a move to bring more people into the effort, Corado has since added two team members, both Black trans women, one experienced in anti-Blackness work and the other one in community outreach. Corado herself has experience working in multicultural communities and reported she had responded to complaints at restaurants before.

“I’ve always believed in collective work and, in my experience, I have been intentional about bringing voices that are impacted,” Corado said. “I will never speak for the experience of a Black person but my commitment to the issues that affect the people who come to me I have always prioritized.” Since her appointment, Corado says she has spoken to over 40 people about the effort, some of whom have supported her involvement. Moving forward, she wants to facilitate conversations between the community and the bar.

Mitchum expressed concern that Corado had not consulted organizers before accepting the position, and has since blocked several on social media. This compounds his worry that Nellie’s was not listening to what organizers were calling for when they requested community engagement.

“What is the purpose of a director of community engagement when that person is not in the community?” he asked. “Nellie’s hired a non-Black person, and Nellies’ statement only spoke about people of color when the complaints have specifically talked about anti-Black racism and treatment of Black, queer patrons. For us, that means that Nellie’s isn’t paying attention.”

In a statement sent to the Voice following Corado’s addition of the new members to her team, Mitchum said that while there was tension between Corado and the initial organizers of the boycott, “this is not about the organizers versus Ruby as that’s unproductive and unhelpful.” He added, “this is about how we should all be attempting to listen to our community and neighbors about providing safe spaces to Black queer and trans people.”

Mitchum is similarly frustrated that the other three demands from the organizer’s original campaign remain unmet. The first, community listening, where patrons could express their experiences and grievances with the bar, is vital if Nellie’s wants to resume operations in a way that shows care for their Black patrons. “A community listening session is really important so you can understand how to actually be accountable for the things that community members even want and so that you can understand what actions the complaints have even been,” he added, pointing to the fact that Nellie’s has ignored many of the complaints from before the violence against Young in their response. The bar has also disabled comments on their social media.

The organizers are also asking Nellie’s to release the full video footage from that night. In an investigation by D.C.’s Alcoholic Beverage Regulation Administration, Nellie’s was found in violation of city code since “multiple assaults occurred inside of the establishment” while it was operating with a liquor license.

Finally, Mitchum said community members want to see reparations in the form of tangible donations to Black, queer, trans-led organizations rather than a general promise to continue donations. Leaders of #boycottNellie’s hope to be consulted on which organization they feel would most benefit from that money, and would be specifically centered on racial justice and queer Black liberation.

Even if all these demands are met, Mitchum says he personally will never go back to Nellie’s. “When a person can be dragged down the steps in your establishment and you don’t say anything for one whole month it already tells me what type of leader you are. That’s it for me,” he said. He recognizes, however, that with a dearth of queer spaces in D.C., especially Black queer spaces, some patrons might inevitably return. “We need to make sure those spaces are safe for them,” he added.

Georgetown students in the city this summer and coming back in the fall will also have a choice. Nellie’s has been a popular spot for queer students and their friends, who face the same lack of options as the rest of D.C. Those students, Mitchum says, “will have to take an approach they can live with.”

“I think it’s really important for us to actually think about who we are and where we see our trajectories going. If all we care about is an inexpensive bar drink and having a good time, they will be back. If what we care to do is really wrestle with how complicated this is, we say you know what, I may like a bar, but I like humane treatment better. I may like a place I can go to and dance on a Saturday night, but I think safe spaces are important,” Mitchum said, asking ”Is it really that important for me to go back?”