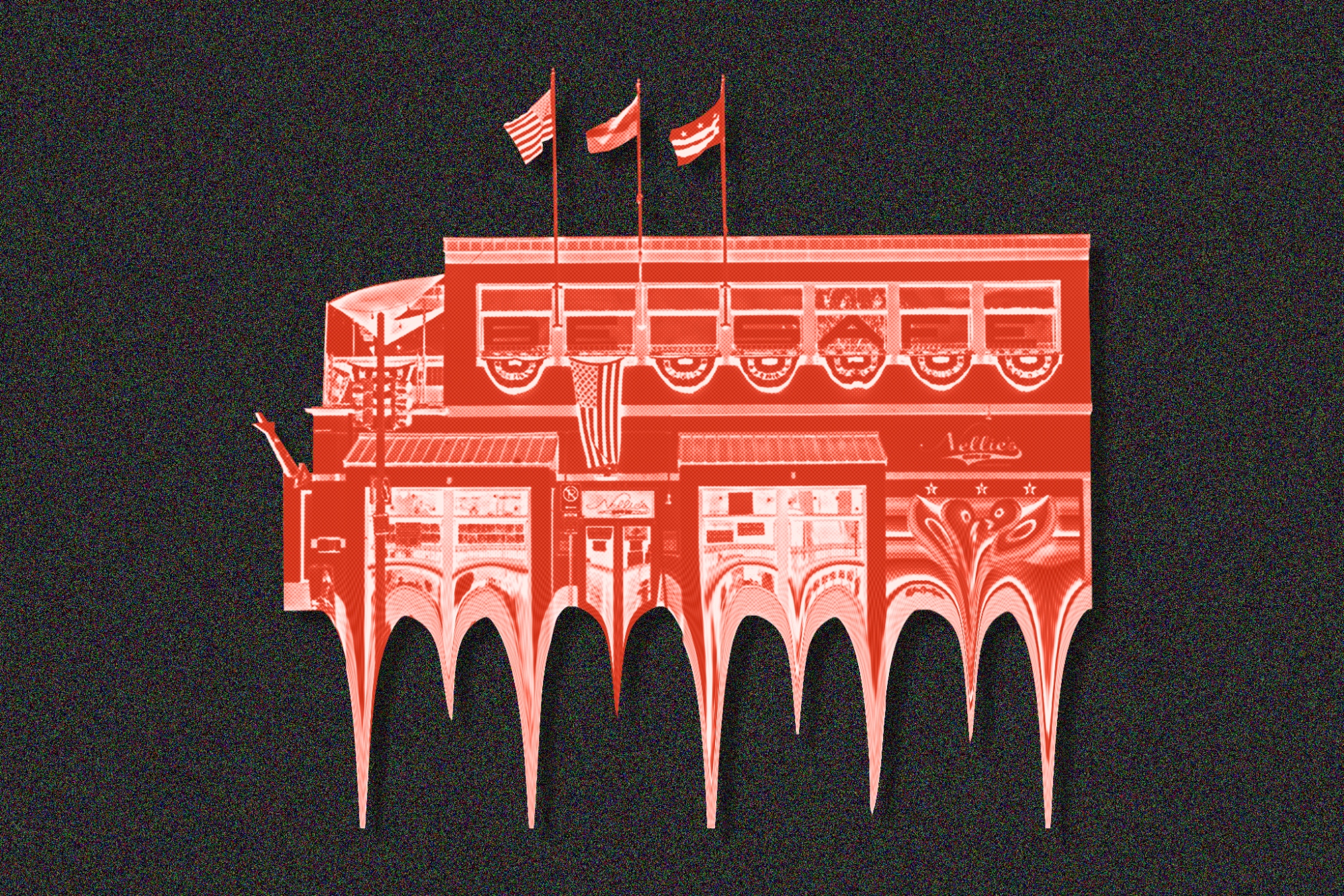 Illustration by Max Zhang; Photo Courtesy of Ted Eytan and modified under CC 2.0

CW: This article references violence to Black and LGBTQ+ individuals and communities.

Protesters gathered in front of Nellie’s Sports Bar on June 13, calling for the local community to boycott the well-known gay bar after a video posted to Twitter the night before showed security dragging a Black woman down the stairs on her back. Though the services of the security personnel have since been terminated, this incident was just the latest in a string of reported racist incidents at the popular U Street bar. A “block party” to boycott Nellie’s will be held outside the bar Friday, June 18, beginning at 7 p.m.

The woman in the video, later identified as 22-year-old Keisha Young, was shown to be dragged head-first down the stairs at the front of the bar as security personnel pulled her by her arms and, according to her lawyer, her hair. Young and those who can be seen trying to pull the security off and protect her, later identified as her cousins, are pushed out the door, as other patrons yell “Oh my God.”

The spread of the video, just one version of which has garnered nearly 230,000 views at the time of publication, sparked outrage among local residents, who organized a protest outside the bar Sunday evening, condemning Nellie’s violence against Black patrons and perceived unwillingness to protect Black women. Some protestors then moved to the purported home of white bar owner Douglas Schantz, who was not at the bar during the protest. According to Nee Nee Taylor, a co-conductor with Harriet’s Dreams (a Black-led community defense organization), Schantz did not have plans to visit the bar.

At the protest, Young spoke to John Henry of WUSA and said that while Nellie’s security justified removing her because she brought in an outside drink, she wasn’t the person they were initially targeting. “They was trying to get some other people out because somebody else brought a bottle in there and somehow I got mixed up in the altercation because I looked like somebody else and I got hit and dragged down the steps,” Young, who went to Nellie’s to celebrate Pride weekend with her friends, said to WUSA. “I didn’t do nothing wrong.”

According to reporting by Washington City Paper, Young’s family is pursuing a civil claim against Nellie’s to hold them liable for assault. Their attorney, Brandon Burrell, has requested Nellie’s release the full video of the night to the public. “The actions of Nellie’s staff were not justified. Any ambiguity concerning what happened that night can be dispelled by Nellie’s releasing the video surveillance,” he wrote in a statement.

Young, who went to the hospital the day after the incident, is also raising money for medical bills, therapy, and legal fees. “I am aching all over my body, I can’t walk straight because my hip is in pain. I’ve been struggling to sleep this whole situation got me anxious,” her GoFundMe reads. “I’m just happy that it didn’t escalate too far and that I’m still here in my pain and grief still able to tell my story and get justice.” The GoFundMe had raised $14,904 out of a goal of $75,000 at the time of publication.

On Sunday evening, the protestors surrounded the bar, informing potential patrons about what had happened the night before. For many, the goal was not just justice for Young, but an overall reckoning with Nellie’s role in the queer community.

“Nellie’s security felt that it was okay to escort one of their Black woman patrons out of the club by dragging her by her hair,” Taylor told journalist Chuck Modi during the protest. “So we ask the people to protest and boycott Nellie’s because the owner, who is a white man, don’t care about Black women. If he cared, he would come out here and be concerned about what security done to a Black woman in his club.”

Nellie’s sits at the corner of U St and 9th, in Ward 1, a historically Black and Latinx area, though low-income residents have been displaced in recent years due to an inflow of richer, often whiter, residents. Nestled between Shaw, which has historically been a Black cultural and economic hub in the city, and Howard, a historically Black university, it’s also just a few blocks north of Ward 6, which has experienced the most rapid gentrification and displacement of any area in the city.

To Preston Mitchum, former frequenter and policy director at URGE, Nellie’s actions are even more concerning when put in the context of this vicinity. “It’s particularly disheartening to have this experience on U St, where we know Black communities have predominated,” he told the Voice.

Mitchum, who is Black and gay, frequented the bar in 2016, before noticing how differently Black and white patrons were treated. According to him, if there was a fight or disruption at the bar among Black queer men the staff would not attempt to de-escalate the situation themselves, leaving that up to patrons, or would just kick out the disturbance or call the police. In contrast, Mitchum said, if white patrons were harassing Black patrons or fighting amongst themselves, the staff would do everything possible to de-escalate. These disparate patterns of behavior could have had long-term impacts for Black patrons, who are more likely to be arrested and brutalized when the police are involved.

At the time, he met with the owner, Schantz, to discuss what he had observed, and wrote a letter following the meeting, after which Mitchum said little changed.

Monday night, Nellie’s posted a statement to social media announcing they terminated the services of the security vendor.

“We offer a heartfelt apology to all who witnessed the horrific events of this past weekend. No matter what behavior occurred prior, nothing warrants mistreating, and disrespecting, one of our guests,” the statement reads. “What we can say is we have heard the concerns of the BIPOC and LGBTQ communities. Nellie’s will be closed this week as we evaluate this regrettable situation, though we will continue to pay all non-security staff their normal wages.” A previous statement announcing the bar had launched an investigation into the matter has since been deleted.

This statement did not address the long-standing concerns around resistance to change that some protestors raised about Nellie’s, according to Mitchum. “What we’re actually understanding from Nellie’s is that they’ve been racist,” Mitchum said at the protest. “Let’s not be confused about who actually owns and operates Nellie’s. It is us. It is our bodies on the line every single day.”

At the protest, Mitchum also accused Nellie’s of relying on the business of Black patrons and gentrifying the local community while failing to care for its Black employees and patrons. He cited an incident when a Black employee was sent to the hospital as a result of work at the bar and received little attention from management. Similar concerns and examples were shared via Twitter from several accounts. “Nellie’s does not care about Black bodies, they care about Black dollars,” he declared. “We do not need this racist white establishment, we need to reclaim our spaces.”

He added the violence against Young showed the intersection of Nellie’s preferences towards white men as patrons. “This was not just racism, this was misogynoir,” he said, as the crowd erupted into chants of “protect Black women.” Misogynoir refers to discrimination directed at Black women as a result of their intersecting racial and gender identities.

Pointing at letters in the window reading “Black lives matter,” he reminded the crowd that only a few years earlier, the bar flew a Blue lives matter flag, signifying a deep disconnect with the realities of Black life in the local community. Indeed, the police presence at the protest was noticeable, as a line of cops stood in front of the bar, though no videos show protestors attempting to harm the physical property. To Mitchum, it was another sign of Nellie’s putting “property over people.”

This history, combined with the fact that, according to Mitchum, the bar has not apologized to Young, has led him to urge patrons to continue boycotting the bar after they reopen.

“Nellie’s need to close indefinitely. This is not an issue of a security guard. This is an issue of ownership,” he told the Voice. “It became crystal clear that even after I thought that they would make some changes, hire more Black, queer, trans staff, invest in more things related to diversity, equity and inclusion, watch out for more sexual assault and harassment at their bars, deescalate conflict as opposed to ensuing violence and kicking out patrons, all of these things led me to the clear understanding that shutting down for a week is not going to help that establishment.”

To Georgetown students, many of whom frequent the bar, his message was clear: Don’t go.

“We will never need a place that has justified its violent behavior ever,” Mitchum said. “It says more about us, than them, when we are willing to spend our hard-earned money at places that don’t care about us.”

When Young was asked by WUSA what she hoped happened to the establishment, she was similarly steadfast.