After nearly 30 years of incarceration, Joel Castón is home. A mentor, advocate, advisory neighborhood commissioner, and former member of Georgetown’s Prison Scholars Program (PSP), Castón was released from the D.C. Jail on parole on Nov. 22.

A congregation of Castón’s family, friends, advocates, and colleagues gathered outside the jail on Monday night to greet him in an emotional reunion. Some of those present held signs reading “Defying the Odds,” “Resiliency,” and “you take control when you refuse to give up” over a photo of Castón.

“I’m overjoyed to welcome Joel home,” Howard said in a post on the PJI website. “This is just the beginning for him, and I look forward to many years of work, inspiration, and friendship together.”

While incarcerated, Castón took classes through PSP, an extension of the PJI, which has been offering credit-bearing and non-credit-bearing classes at the D.C. Jail since 2018. Castón helped establish the Young Men Emerging mentorship program while at the jail, where he collaborated with long-time friend Tyrone Walker, a fellow PSP alum and current director of reentry services at PJI. He also taught financial literacy classes through a curriculum he developed called Currency Catchers, helped start a newspaper, and learned several languages.

On top of all of this, Castón became a local public official, a role with the power to make change beyond the confines of the D.C. Jail. When Castón was elected to the Ward 7 Advisory Neighborhood Commission (ANC) and sworn into office in June of this year, he made history as the first incarcerated person to hold elected office in the nation’s capital. Castón is the ANC commissioner for the single-member district 7FO7, which was created in 2012 following the 2011 redistricting process, and is the first individual to hold the seat. The district currently encompasses the D.C. Jail, the Harriet Tubman Women’s Shelter, and the Park Kennedy apartment complex—making Castón’s main constituents unhoused and incarcerated individuals.

Castón, who was scheduled to testify about the conditions of the jail to the D.C. Council, was nearly transferred to a federal prison earlier this month, a move that raised eyebrows among council members and Castón’s legal team.

Now back in the D.C. community for the first time since he was 18 years old, Castón is spending time with family and readjusting, according to a member of his support staff.

As many welcomed Castón home and celebrated his accomplishments, advocates hope that his positive impact will be more widely felt. 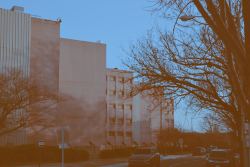