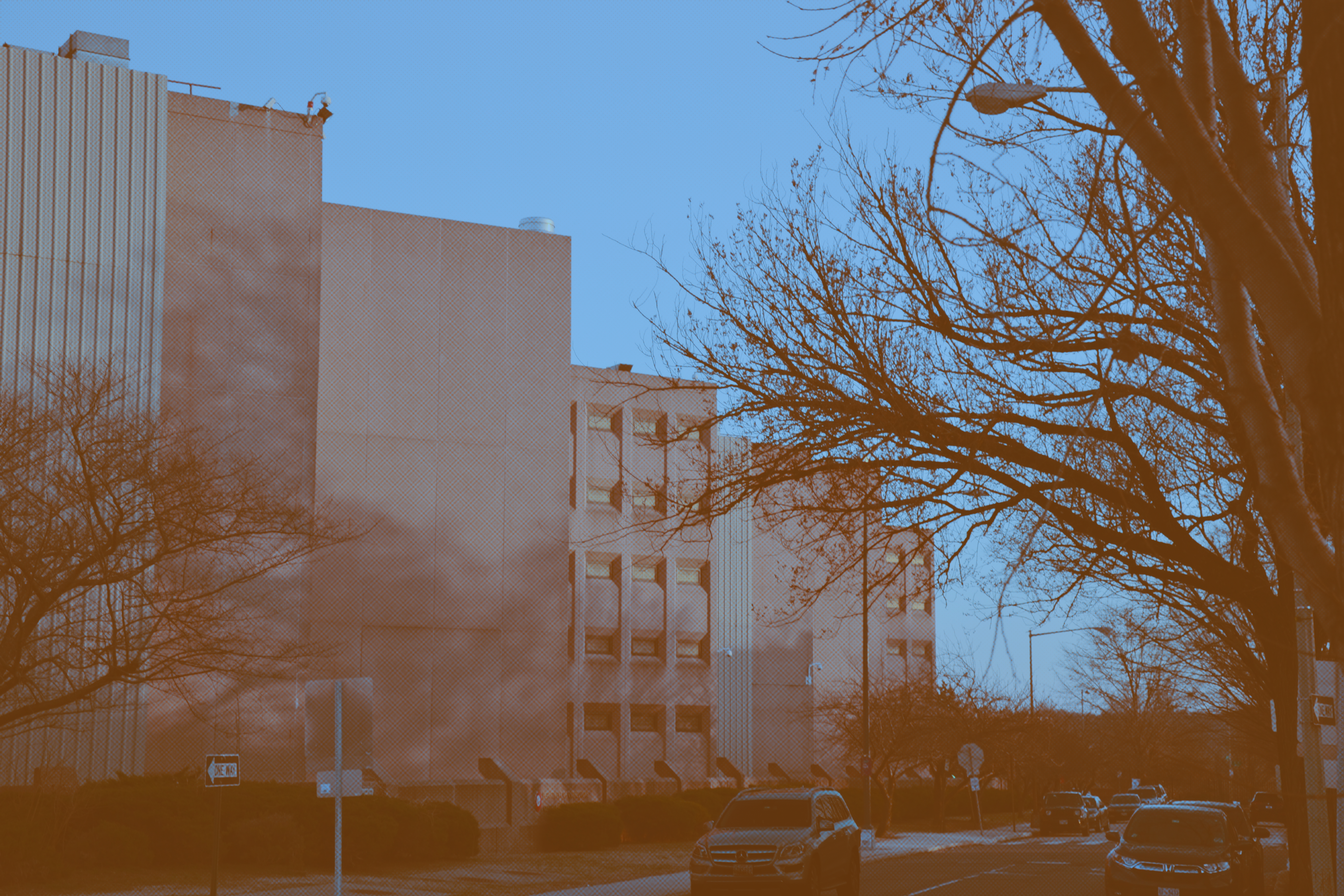 Tyrone Walker memorized one specific sentence in the bio of Tom Faust, the director of the D.C. Department of Corrections (DOC). Faust, who oversaw the D.C. Jail from 2011 to 2016 and resumed the role earlier this year, has a description of what he did in his previous tenure. Walker, who was incarcerated from the ’90s until 2018, knows it word for word.

This so-called innovativeness, Walker said, must be questioned. For him and other incarcerated people at the jail, Faust’s reforms didn’t feel like an innovation, or improvement, over the status quo.

Faust’s “innovation” was splitting the jail in half, with one half being allowed out of their cells in the morning, and the other in the evening. They alternated every day, so that between morning one day and evening the next, people would be confined to their cells for 27 straight hours. “The jail was on a semi-lockdown when I went back in 2015,” Walker said.

Walker said the partial lockdown made the jail feel completely different from when he had first been there in 1991. But when the pandemic hit, that change became even more drastic.

To prevent COVID-19 transmission, the D.C. Jail went into full lockdown in April 2020, only letting the people incarcerated there out for one hour each day. The restrictiveness raised eyebrows in the community, though as Walker pointed out, the problem wasn’t new.

“We keep talking about, oh, the jail’s on lockdown. The jail’s been on lockdown,” Walker said. “It’s been like this for some years.”

But for many people who are not justice-impacted, the pandemic was the first they’d heard of poor conditions in the D.C. Jail. Julie Johnson, who is white, has lived five blocks west of the jail for six years, said that she jogged around it and heard its weekly alarm test but never stopped to consider the jail or the people held in it.

“It is very easy to live in this historic neighborhood on Capitol Hill and never actually see the jail that sits right in the corner,” Johnson said. But after a Black Lives Matter march, she reached out to neighbors and the city government about what was going on in the jail. “And once you see something, you can’t unsee it.”

She joined two others from Hill East and set out, asking other organizations for advice on where they were needed. Johnson recalls one activist’s advice: “If you do nothing else, just be a voice.”

To ensure that voice wasn’t misrepresenting the 88 percent Black jail population they sought to support, the women joined with James Carpenter and Anthony Petty, both Black and justice-impacted, and formed Neighbors for Justice.

“We’re very aware that we are white, non-justice-impacted individuals, and that good intentions are not enough,” Johnson said. “That’s why in the work that we do, we’re leveraging the power of the lived experience of James and Anthony and others, and then we’re harnessing the voice of neighbors locally.”

With Carpenter and Petty’s input, Neighbors for Justice directed their efforts at the COVID-19 lockdown. In May 2021, with 300 individual and 41 organization signatures, they delivered a petition calling for the lockdown’s end to the mayor and the D.C. Council.

“The very next week,” Johnson recalled, “they removed the lockdown.”

Their advocacy had a major impact, but of course, this and other issues had been going on long before Neighbors for Justice formed. The activism was welcome, but the problem started long before COVID-19, according to currently and formerly incarcerated D.C. residents, as well as past inspection reports.

In 2015, a report by the Washington Lawyers’ Committee for Civil Rights and Urban Affairs called the conditions “alarming,” noting deficiencies in basic sanitation practices as well as “more fundamental degradation of the D.C. Jail’s physical infrastructure.” The poorest conditions were found in the Central Detention Facility (CDF), where most of the adult men are held, whereas the Correctional Treatment Facility (CTF), the other half of the jail, was deemed mostly acceptable.

Colie Levar Long, who is held in the CTF, corroborated this. “It’s an outdated jail, it’s a sinking ship you got to patch,” Long said. “It’s like whack-a-mole. You got one hole, you patch it up, there’s another hole popping up. The ventilation, the poor air conditioning, the food, is horrible. All that.”

Long said that while he is grateful for the concern, and even lawsuits, the living conditions have garnered since COVID-19 began, it has always been that way. The jail’s dire conditions have been impacting people experiencing incarceration for decades, and the creation of programs like the Young Men Emerging Unit and Georgetown’s Prison Scholars Program, though effective, has been the only change, according to Petty.

“It’s a broken system at the jail,” Johnson said. “It is not structured to treat the people in its care as people. There is no respect for the humanity of the individual.”

Patrice Sulton, founder of D.C. Justice Lab, knew when she set out to rewrite D.C.’s laws that she couldn’t take any shortcuts. “It’s a lot of work to write things the right way,” she said. It was essential to center Black, low-income, and formerly incarcerated voices.

Sulton also talks to those most directly impacted by the justice system to get better ideas. In a meeting with formerly incarcerated people to discuss the criminal record expungement laws, one woman shared that she felt she had to put up with poor treatment because her record would make it hard to find a job elsewhere. Sulton included it in her argument for rewriting the laws.

At the Justice Lab, Sulton not only seeks solutions to problems in the criminal legal system but also to draft and advocate for legislation.

In centering Black voices, Sulton emphasizes the racism inherent in the D.C. criminal legal system. The United States incarcerates more people than any other country in the world, and, according to a 2016 report, in 12 states, over half the prison population is Black due to systemically racist policing, sentencing, and incarceration systems. The District is 45 percent Black and incarcerates more people per capita than any state, raising larger questions about the morality and efficacy of incarceration itself.

Racially inequitable treatment in the D.C. Jail system came vividly into focus last fall when complaints from white insurrectionists detained for Jan. 6 prompted a U.S. Marshals inspection, which resulted in moving hundreds of incarcerated people to a federal facility in Lewisburg, PA.

The mass transfer was done to depopulate the CDF, which the inspection found in violation of many health standards. But the CTF—the half of the jail the insurrectionists were complaining about—was found to be satisfactory.

Marc Schindler, Executive Director of the Justice Policy Institute, said the transfer was just one example of the persistence of white privilege and racism in the criminal legal system.

“If the D.C. Jail had been disproportionately filled with middle and upper-class white people for the last however many decades, we wouldn’t have the situation that we have,” Schindler said. “We wouldn’t allow this number of people to be incarcerated, nor would we allow them to be held in the conditions that exist.”

Schindler added that the insurrection resulted in something that hadn’t happened before: a large number of white people in the D.C. Jail.

“It proved my hypothesis, because the system responded and said no, these conditions are not acceptable. It wasn’t allowed to happen.”

Long recalled the findings of the inspection and remembered thinking that most of the concerns were nothing new—the only changes had to do with demographics, with the white insurrectionists in the jail. That made the fact that many people he knew were moved to a federal prison with even worse conditions outrageous.

“Those white guys, they got locked up, they come over here, they get put up in the CTF, which is a better living environment, and someone had the audacity to ask for organic food,” Long said. “Then when they do the inspection, they don’t send none of the white boys over to Lewisburg. They send all the Black guys there. It’s a lot of my friends that went. And you sending them to a place that’s designed to punish them. It doesn’t make sense.”

Pam Bailey documented the lives of young people in the Gaza Strip, until she was arrested and deported by the Israeli government, banned from ever returning.

But Bailey was determined to continue highlighting undertold stories. She found a “surprising parallel” between Gaza’s youth and people incarcerated in America’s federal prisons: People only saw them for their label. And when she met Rob Barton, who was at the D.C. Jail and had been incarcerated for almost 25 years, she found someone who shared her passion for storytelling. In February 2020, they published their first blog post on More Than Our Crimes, with Barton writing posts and sending them to Bailey.

Instead of the D.C. jail specifically, Barton wanted to speak up more about the federal prison system and incarceration in general–something he saw few others doing.

“There isn’t any advocacy in the federal prison system,” Bailey said. “Let’s face it, what kind of reforms do you see Congress doing? Nothing.”

Because D.C. is a federal enclave, the Federal Bureau of Prisons (BOP) claims custody over those convicted under D.C. laws, who, in any other part of the U.S., would serve in state prisons. Thus, many D.C. residents experiencing incarceration spend the bulk of their sentence being shuffled between federal institutions, effectively cut off from any visitation from their families or their counsel.

“There’s an emotional effect of the separation. Especially guys that’s in the federal prisons,” Petty said.

And according to Long, Walker, Petty, and Barton, all of whom were convicted before the age of 20 and served more than two decades in various prisons, the federal system is often even worse than the D.C. Jail.

The rampant spread of the pandemic brought more attention to the livelihood of federal prisoners—Sen. Dick Durbin (D-IL) has been coordinating a hearing with Bailey and Barton to examine shortcomings in the Federal Bureau of Prisons.

“That’s something we can thank COVID for, is that finally, there’s some attention to conditions,” Bailey said. “But everybody’s treating it like a function of COVID. No, the point is the health care was shitty before. The overcrowding was there before. The lack of hygiene was there before.”

In a post-pandemic world, Bailey hopes public attention on prison living conditions doesn’t disappear. “I’ve become kind of concerned that when COVID finally fades from prominence, they’re all going to look the other way again,” she added. “But the conditions that led to all this are still going to be there.”