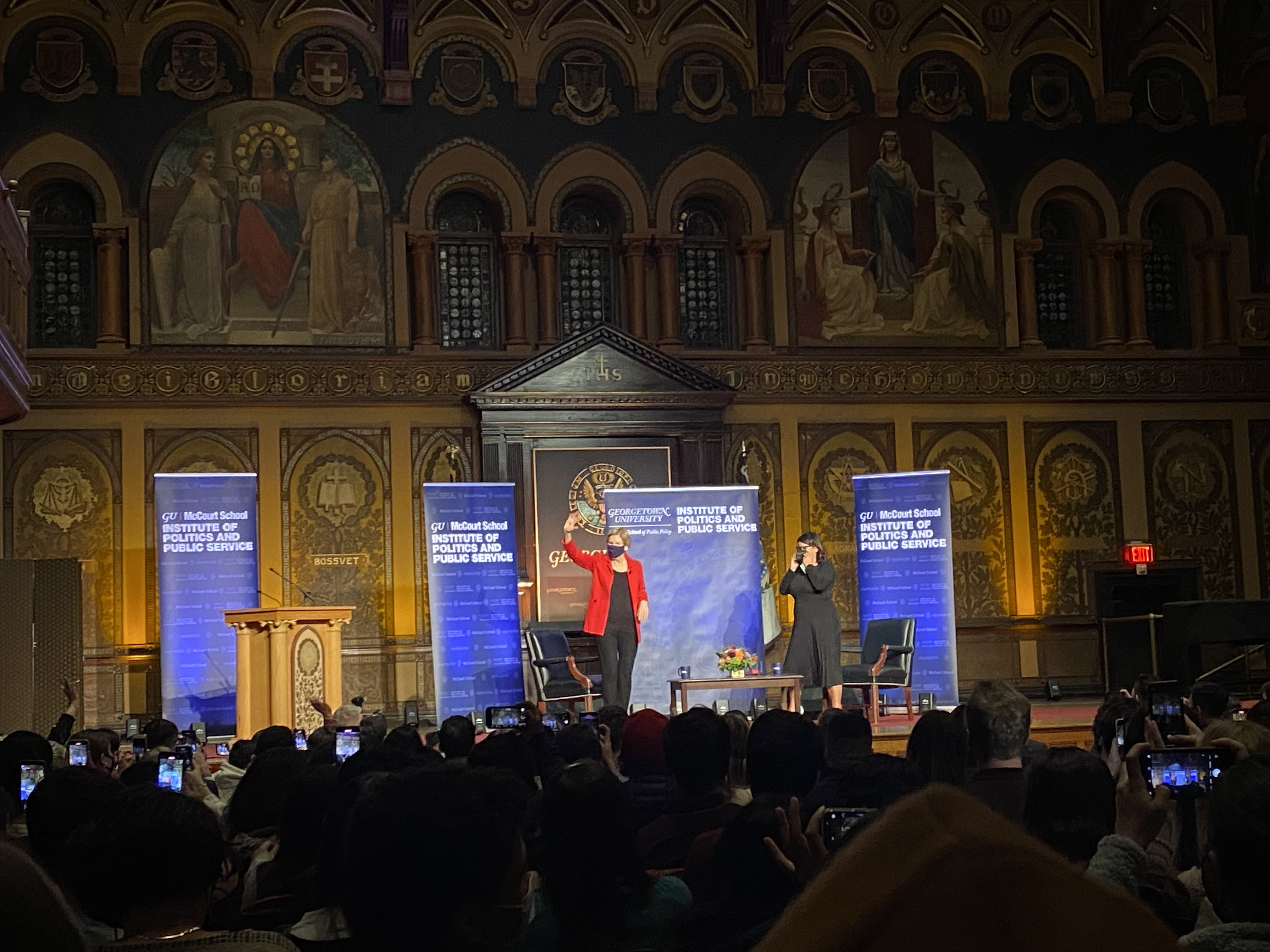 Georgetown’s Institute of Politics and Public Service (GU Politics) hosted Sen. Elizabeth Warren (D-MA) to discuss her opinions on the Build Back Better agenda, universal childcare, a minimum corporate tax rate, and other policy themes to an audience of approximately 500 students in Gaston Hall on Nov. 30.

Edward Wu (COL ’22), leader of the student strategy team for GU Politics fellow and event moderator Rebecca Pearcey, introduced both Warren and Pearcey. “I’m excited to hear from two expert policy makers about the policy response to the pandemic and where we go from here,” Wu said.

In addition to being a fellow this year, Pearcey is a former Warren political advisor and senior advisor to her presidential campaign.

“Democracy is hanging by a thread and that thread is fraying,” Warren said, making a dire assessment of the state of the U.S. Congress in light of a possible government shutdown and debt default worries.

Warren also went into detail about two areas of policy in the Build Back Better agenda that have drawn her focus: universal childcare and pre-kindergarten education and the introduction of a minimum corporate tax rate of 15 percent. Warren reasoned that universal childcare invests both in parents, who will be able to go back to work once the burden of childcare is lifted, and childcare workers, whose field is characterized by a high turnover rate and low pay.

Investigating corporate corruption has been a significant part of Warren’s political history. She suggested that the new minimum corporate tax rate under the Build Back Better legislation tax publicly-declared book income, decreasing room for loopholes. According to Warren, her team found 72 companies netting over a billion dollars that paid below the 15 percent tax rate.

Warren’s research, based on 2018 company profits, suggests that fining companies for finding tax loopholes through violating hiring restrictions could help to make up for these losses in tax revenue. Warren has advocated for plans to redirect these funds to expanding social services and investing in public programs such as affordable housing initiatives and creating green manufacturing jobs.

In addition to describing her perspective on current legislation, Warren discussed a variety of other relevant social and political issues throughout the United States.

Warren addressed how the disparate impacts of the pandemic have been tied to identity and race in particular. In the early days of the pandemic, Warren said, COVID testing data accounted for factors such as age, gender, and zip code—but not race. Warren said that if legislators only have these limited data criteria, “then that’s all you can fix.” Once racial data was taken into account, it became apparent that communities of color were disproportionately affected by higher cases of COVID and less access to testing.

Students in the audience also had the opportunity to ask questions, covering a wide range of topics from tax policy to political advice.

The first question expanded on Warren’s conversation about how the pandemic affected different populations; a graduate student asked the senator how we can learn from the pandemic to ensure that undocumented immigrants will be protected by the U.S. government. “Public health infrastructure needs to be strengthened, and it needs to start with human beings, not questions about citizenship or race,” Warren said. The senator then suggested that a strengthened public health system will serve as a foundation that builds up transportation, housing, food insecurity, and other issues that disproportionately affect immigrant communities.

Warren moved on to discussing wealth and tax measures in response to later questions. “It’s time for a wealth tax in America,” she said, to a round of applause from the audience.

Warren said that the level of wealth inequality in America creates cyclical class divisions, describing the political and social power that comes from having immense wealth. She suggested tax law should focus on wealth rather than income inequality because the share of assets held by the wealthiest individuals leads to higher rates of inequality.

In addition to setting out her policy agenda, Warren interspersed her conversation with more personal narratives as well, including challenges she faces as a female lawmaker. When she first ran for her U.S. Senate seat in Massachusetts, she was told to avoid speaking about any topic that would suggest that she was a woman, such as childcare and education. Warren urged the audience to ignore that kind of advice and instead approach their work with every aspect of their identity.

“At the end of the day, you need your feet well planted. You know who you are, you know what you fight for, that’s what’s going to get you through,” Warren said.

In order to improve the inclusivity of her party, Congress, and the nation, Warren looked to students willing to step up and volunteer to work. Though she believes the road ahead will continue to bring challenges, she said, “We talk about things that are broken because we are ultimately optimistic.”

By Maya Kominsky and Megan O'Malley

By Paul James and Nora Scully