Jordan Riley is seen during the Georgetown vs Dartmouth basketball game in Washington, DC on November 13th, 20201 at Capitol One Arena. Photo by Nathan Posner

Thursday’s matchup marked Carey’s and Head Coach Patrick Ewing’s first game back from illness and COVID protocols, respectively. The Hoyas also made a change to their starting line-up, starting sophomore forward Collin Holloway in place of Rice, who had started all but one game up to this point. Holloway had been playing well as a starter in place of Carey, scoring in double digits against both Marquette and Butler earlier this month, but Thursday was not his night.

Providence started the first quarter off of a strong with a 13-0 run. The Hoyas didn’t score their first points of the game until the seventh minute, when Carey hit a fast-break three-pointer.  A couple of three-pointers from Rice and five points for the Friars’ redshirt junior guard Jared Bynum brought the score to 18-9, Providence.

After some back-and-forth action between the Friars and the Hoyas, Georgetown went on a 7-0 run to make it a five-point game, 25-20. Providence maintained their lead for the rest of the half, with more alternating scoring, including 13 first-half points from Croswell, who had been averaging 4.9 points per game. For the last possession of the half, freshman guard Tyler Beard hit a buzzer-beating three-pointer under pressure to cut the Friars’ lead to three, ending the half 37-34.

Unfortunately for Hoya fans, the start to the second half was a disappointing deja vu. The Friars scored seven points without response until Georgetown tallied a much-needed two-point jumper from Carey. Providence was quick to respond with a dunk from graduate center Nate Watson on the other end.

The Hoyas’ offense was stagnant again until freshman forward Jalin Billingsley entered the game for the first time at around the 16-minute mark of the second half and hit an and-one two-point jumpshot to bring the score to 48-39, Friars.

From then on, Georgetown’s offense relied heavily on three-pointers, especially from Carey, who shot five-for-nine from three on the night, and Rice, who shot five-for-seven from three. Despite shooting 56.5% from behind the arc, the Hoyas couldn’t get defensive stops. The additional points they got from layups, free throws and two-point jumpers weren’t enough to close the gap. Providence won with a final score of 83-75.

Looking ahead, the Hoyas have a shot at winning at least a couple of games in Big East play if they can continue to shoot as well as they did against Providence from three, tighten up their defense, and stay healthy. But even with Carey and Ewing back, there’s still work to be done.

Georgetown’s men basketball will play their next game on Saturday, Jan. 22 at home against rival No. 11 Villanova. Tipoff is at 12:00 PM in Capital One Arena, and the game will be broadcasted live. Follow @GUVoiceSports on Twitter for more updates and coverage of all Georgetown sports. 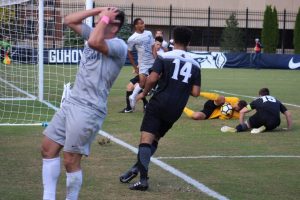 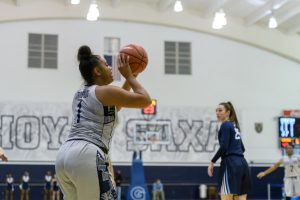 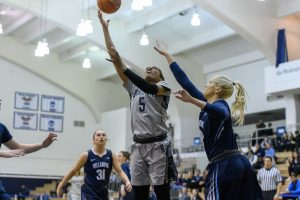