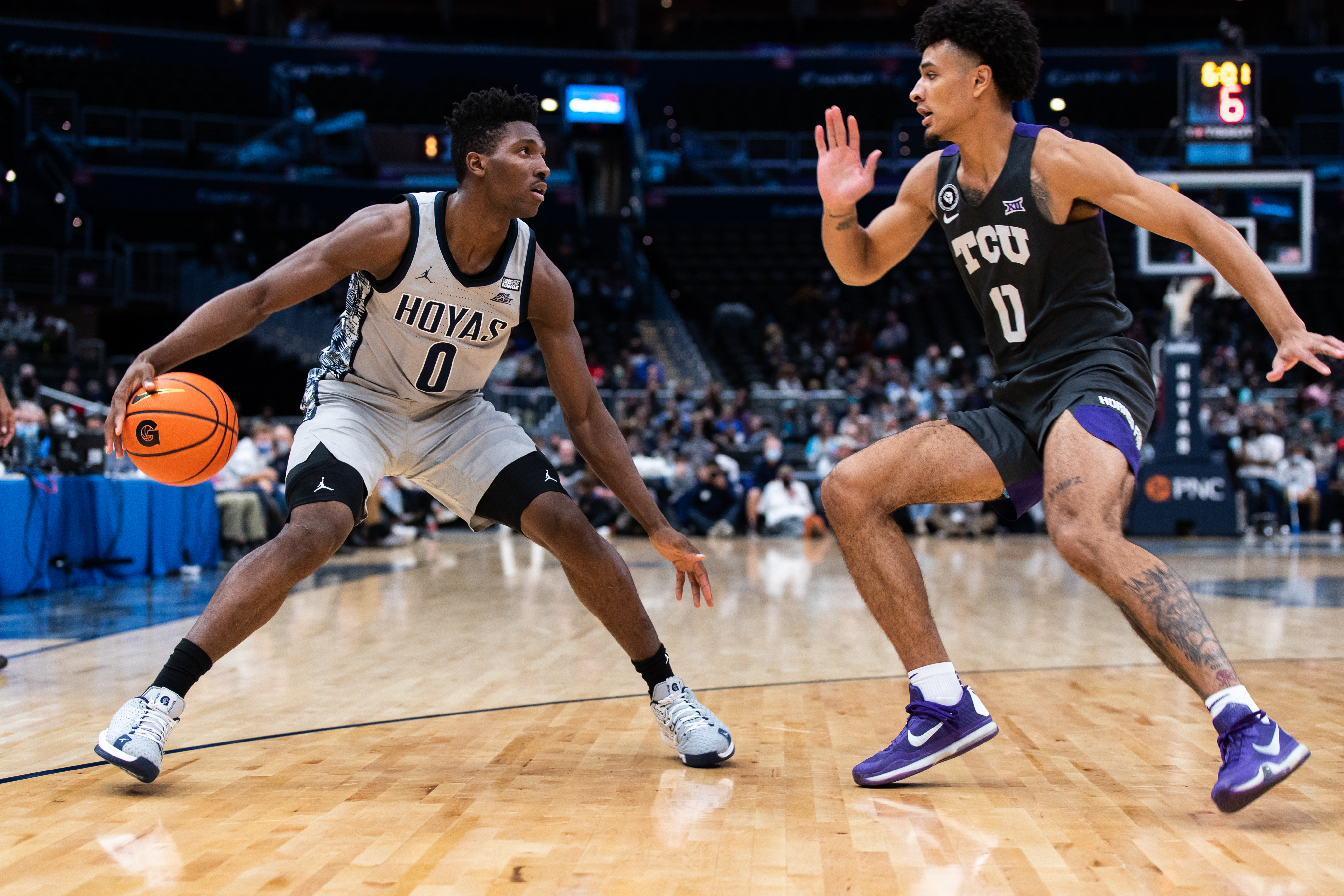 Aminu Mohammed dribbles on the ball against TCU. Photo by John Picker

The Georgetown Hoyas men’s basketball team (6-19, 0-14 Big East) lost by a score of 77-66 to the Marquette Golden Eagles (17-9, 9-6 Big East) on Wednesday night in Milwaukee. Sophomore forward Colin Holloway led the way for the Hoyas with 15 points. He was one of four Georgetown starters in double figures. Freshman guard Aminu Mohammed currently leads the Big East in double-doubles, recording his ninth of the season in the defeat. For Marquette, freshman guard Kam Jones had a game-high 19 points off of the bench while senior forward Kur Kuath was perfect from the field, contributing 15 points.

Coming off of a big loss against Creighton on Monday night, the Hoyas’ defensive woes reappeared immediately. Big East Player of the Year candidate freshman forward Justin Lewis started the scoring with a wide-open three for Marquette. Uncontested looks from distance would prove to be a theme all night for the Hoyas as they conceded 12 makes, tying their own record for most in conference play.

Still, Georgetown hung with the Golden Eagles early on behind a three from graduate guard Donald Carey and some impactful early minutes off the bench from junior center Timothy Igohefe. Following consecutive threes from Holloway and graduate guard Kaiden Rice, the Hoyas took their first lead of the game at 19-17. Holloway’s consistency and quality shot selection has been a bright spot in Georgetown’s down season.

The Georgetown momentum was not long-lived, however. Marquette senior guard Greg Elliot hit back-to-back triples forcing Head Coach Patrick Ewing to call a timeout. Not long after, Kam Jones made three straight threes and Ewing was forced to burn another timeout. This 17-4 run for the Golden Eagles gave them their largest lead at 37-26. Harris and Carey continued to keep the Hoyas afloat, but Kam Jones’ 17-point first-half effort meant Georgetown went into the locker room trailing 48-31- the same score as two nights prior against Creighton.

Ewing made a change to go small at the start of the second half, replacing junior center Malcolm Wilson with Rice. However, the defensive issues persisted. Marquette began the half on the 7-0 run with current Big East assist leader freshman Tyler Kolek recording his eighth of the night on a lob from Kuath. When Justin Lewis made another three, the Golden Eagles’ lead ballooned to 59-36.

Much like their game against Creighton on Feb. 13, once the lead got to above 20, the Hoyas began a mini-run. Harris and Mohammed hit triples to kickstart a 9-0 spurt, cutting the deficit to 17. Harris finished the game with 14 points, while Mohammed had 14 points and 17 rebounds despite a wildly inefficient night, shooting just 3/19 from the field.

In the end, the Hoyas managed to cut the lead 11. However, it was far too little, far too late. Freshman forward Oliver-Maence Prosper put an exclamation mark on the victory for Marquette with a huge dunk as time ran down, ad Georgetown dropped their 15th straight contest to Marquette, 66-77.

The 14th conference loss of the year is the most ever in a single season by a Georgetown Men’s Basketball team. With Kam Jones’ explosive first half, it marks the sixth time in seven games where an opposing player has made five or more threes against the Hoyas. Something has to change defensively, as the Hoyas’ best chance at a regular-season win fast approaching, as DePaul comes to Capital One next week. For now, Hoya fans have to find joy in young talent developing before our eyes. Harris, Holloway, and Mohammed combined for a total of 43 points tonight against one of the better defensive units in the Big East.

Georgetown’s next chance comes on the road at Villanova on Saturday, Feb. 19. Tip-off is scheduled for 5:00 p.m. and the game will be broadcast on FOX. Follow @GUVoiceSports on Twitter for more updates and continued coverage of all Georgetown sports. 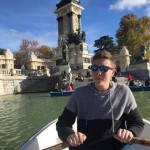 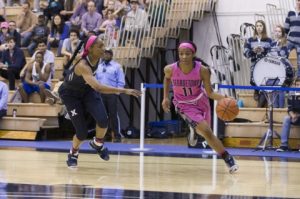 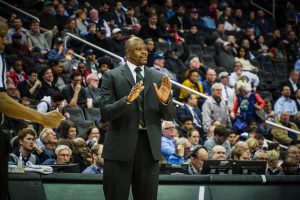