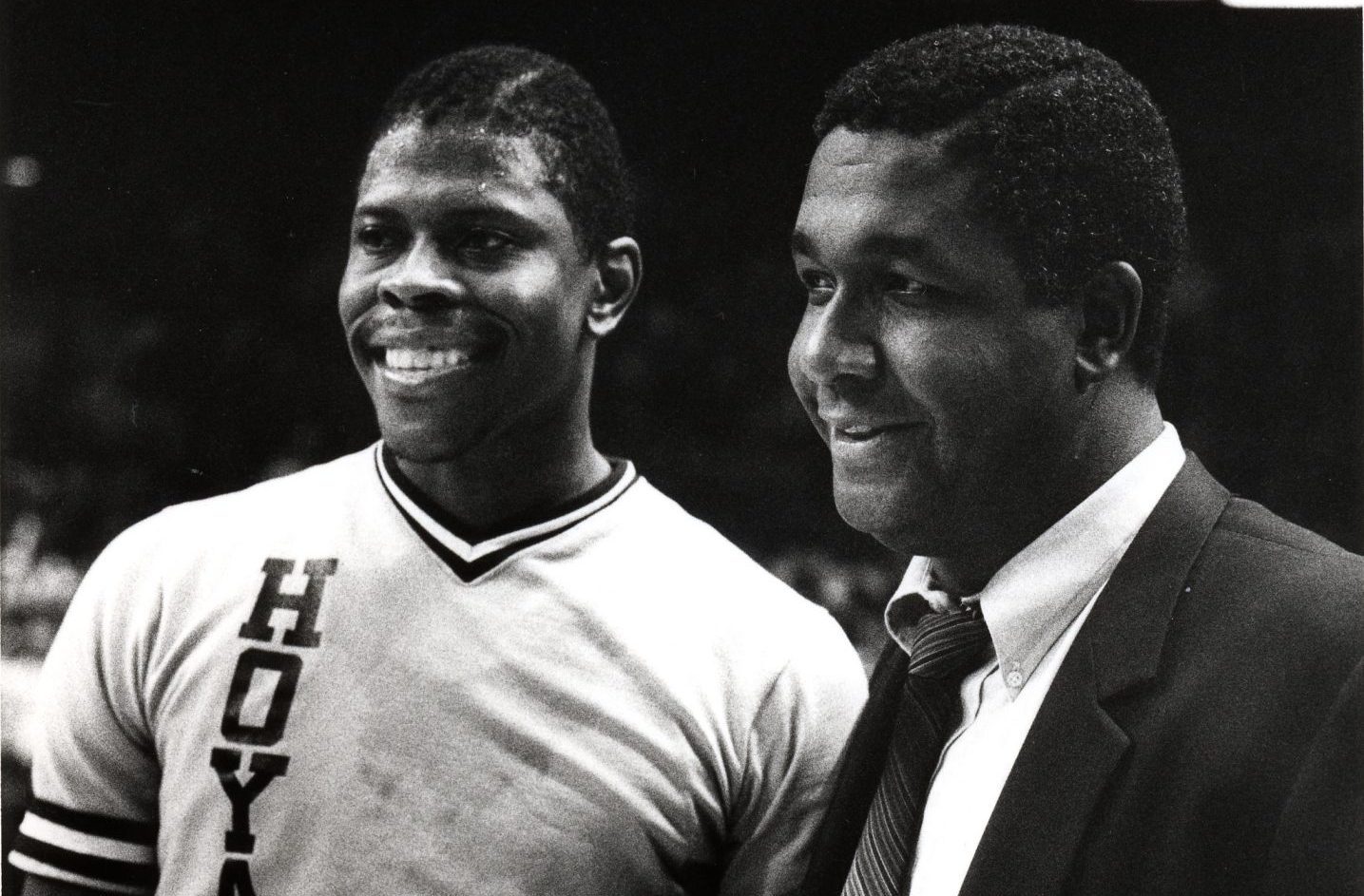 Thompson and Ewing pose together when Ewing was a player.

Georgetown commemorated the life of former men’s basketball coach John Thompson, Jr., who passed away on Aug. 30 at the age of 78, in a virtual event held via Facebook on Oct. 3.

After winning two championships with the Boston Celtics as a player and compiling a 122-28 record as the men’s basketball coach at St. Anthony’s high school in Washington, D.C., Thompson was tapped by Georgetown to serve as the men’s basketball coach in 1972. Coach Thompson turned a fledgling Hoyas program into a national champion and a college basketball movement. Always more than a coach, he emphasized the importance of a Georgetown education to his players and fought to protect their hard-earned rights to a scholarship. Following his highly successful 27-year tenure at the helm of the men’s basketball program, Coach Thompson became a mainstay in sports media, hosting a radio show in D.C. while working with Turner Sports on coverage of the NCAA Tournament.

Rick “Doc” Walker, Coach Thompson’s longtime partner on the radio, moderated the livestream. After a brief video narrated by sportscaster James Brown, the first speaker was former U.S. President Barack Obama. Obama emphasized Coach Thompson’s legacy of building great men and protecting those men from threats to their development, whether it be in the form of drug kingpins or restrictive NCAA rules.

“We haven’t banished injustice on our society, far from it. But we are living in a golden age of young Black activism,” Obama said. “Coach Thompson didn’t like it when people called him a pioneer, but there’s no doubt that his example has echoed down the generations. There’s no doubt his imprint endures. And if we really want to pay tribute to John, may we all strive to set such an example.”

Current Georgetown men’s basketball coach Patrick Ewing (COL ‘85), who played under Coach Thompson from 1981-85, was the next to speak. He echoed President Obama’s sentiments about Coach Thompson’s focus on development.

“Coach Thompson was like my second dad. He was a person that, just by the way he carried himself as a proud Black man, as a young boy I could emulate and try to be like,” Ewing said. “Our relationship grew over the years, from player-coach to father figure, mentor, someone I could always pick up the phone and ask advice for anything.”

The Reverend Mark Thompson (COL ‘88), a student manager on the Georgetown men’s basketball team from 1986 through 1988, emphasized the importance of true representation and the pride the African-American community felt in Coach Thompson’s success.

“The stirring image of Coach at the Final Four in 1982 was a moment of power and pride for African-Americans,” said Thompson. “Exactly 100 years after Georgetown’s most influential president, Patrick Healy, was forced to pass for white, Coach enabled Georgetown to pass for an HBCU. Towering over that first Final Four, Coach instilled confidence in our people everywhere.”

Nike honored Coach Thompson’s 30 years of service as a member of their Board of Directors with a video tribute from founder Phil Knight, among others at the company. That was followed by a panel of former Georgetown basketball players, including Jeff Green (COL ‘12), Roy Hibbert (COL ‘08), Jonathan Wallace (COL ‘08, MSL ‘19), and Monica McNutt (COL ‘11). McNutt discussed how Coach Thompson’s impact was not limited to the men’s basketball team but echoed across the whole campus.

“Everyone knows that Big John sat in that big wooden chair inside of McDonough [Arena], and he wasn’t just there for men’s practices. He was available to us, he encouraged us, he was thrilled for our success, and he got on us when we weren’t playing well too,” said McNutt. “It was his relationship with my teammate, best friend, and current WNBA pro Sugar Rodgers that really stands out, because she was a kid who came to Georgetown off the strength of her talent as a basketball player, and Coach John truly helped her blossom into so much more than just an athlete.”

Though he stood on the shoulders of giants like Clarence “Big House” Gaines and John McLendon, Coach Thompson blazed a path for African-American coaches, garnering admiration from the next generation and respect from his rivals.

“I feel that I lost a brother, a tremendous friend, and a person that I would follow to the end of the world. John was tremendous in standing up for what was right,” said Nolan Richardson, the former head coach of the Arkansas men’s basketball team. “So we will miss the Big Fella, my friend. We will miss the towel that hung around his neck on his shoulder. We will miss him jumping up and challenging the officials. We will miss the way his players played.”

Of course, Coach Thompson’s legacy went well beyond the basketball court. He was an advocate for his hometown of Washington, D.C., speaking at a town hall following the arrest of notorious drug kingpin Rayful Edmond III, who contributed heavily to the crack cocaine epidemic in D.C. In his speech, Coach Thompson perfectly summarized the fear that many young Black residents have and the perception that drugs might be the only way out of poverty.

Following Father Kemp’s comments, several of Coach Thompson’s players spoke about how he had impacted their lives. “He let me know there were options. I never thought about going to college, but he convinced me that it was an option for me,” said Ralph Dalton (COL ‘85, MBA ‘87). “He created an environment where we could be successful, and the legacy it’s left for me is that it has carried on for 40 years.”

“Some people come in your life for a reason, a season, and for a lifetime. You are a part of my lifetime that has made me the man that I am,” added Charles Smith (COL ‘89).

University President John DeGioia summarized Coach Thompson’s impact on Georgetown, challenging everyone to live up to the Jesuit ideals the university emphasizes. “The deflated basketball he placed on his desk symbolized the way he cared for the future of the young men he brought to Georgetown. His first instinct in the Superdome to hug Freddy Brown and a few more hugs two years later in Seattle exemplified persistence and excellence,” said DeGioia. “John provided us with new ways to interpret and imagine our values, enabling all of us to see possibilities for what we could be as individuals and as a university.”

Coach Thompson’s daughter Tiffany shared a deeply personal letter she wrote after her father passed. “With no control, I often hear your voice without expecting it, not in some place of my subconscious but on my TV, reminding me that others are holding on to you too and that I have to share you with them when I just want to keep you for myself and our family,” she said. “But I yield to the knowledge that sharing you is always what has set you free, and so I do.”

Walker finished the event with a few words of his own, citing Coach Thompson as a father figure instrumental in his development as a leader. The event made clear that Coach Thompson was much more than a basketball coach. He was a cultural icon, a role model, a father figure to countless individuals, and a fighter for equity.

The full event can be found here. 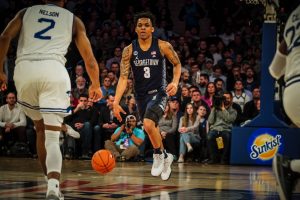 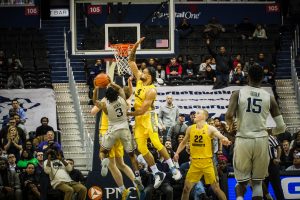 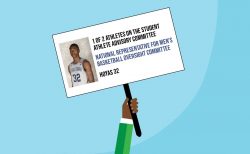