Update: There will be a wake at Wolfington Hall Jesuit Residence on the Campus of Georgetown University on the evening of Tuesday, April 19th from 7:00 to 9:00pm with a prayer service at 8:00pm. Fr. Christiansen’s funeral mass will take place at Holy Trinity Church on Wednesday, April 20th, beginning at 10:30. Burial will be in the Jesuit Cemetery on the campus of Georgetown University immediately after the Mass.

Andrew J. “Drew” Christiansen, S.J., a distinguished professor in the School of Foreign Service and a senior fellow in the Berkley Center for Religion, Peace and World Affairs, died on April 6. Born in 1945 in Staten Island, NY, Fr. Christiansen passed away at 77 from a long term illness.

Fr. Christiansen was a professor of ethics and human development, which he applied to topics of nuclear disarmament, peaceful diplomacy in foreign policy, Muslim and Christian interreligious dialogue, and global human rights issues. In his lifetime, he published over 200 articles in five different languages.

At Georgetown, Fr. Christiansen regularly taught the “Religion, Ethics and World Affairs” class in the SFS and government department, as well as a course on “War, Violence & Peacebuilding.”

He was also the senior mentor of the Figge Family Fellowship Program, in which he worked directly with undergraduate students researching and presenting on global religious issues. He attended annual retreats with the Figge Fellows.

Before Georgetown, Fr. Christiansen taught at the Jesuit School of Theology and the Graduate Theological Union at Berkeley. He taught at Boston College temporarily as a visiting professor and Santa Clara University. He also taught at Notre Dame, where he helped found the Kroc Institute of International Peace Studies.

He was a member of the Catholic Peacebuilding Network’s steering committee, housed at the Kroc Institute, which connects bishops, educational institutions, and humanitarian aid organizations.

Fr. Christiansen attended Fordham University as an undergraduate, then earned a Master’s of Sacred Theology degree and Master’s of Divinity degree from Woodstock College. He also obtained a Ph.D., M.Phil., and M.A. from Yale University.

In addition to his teaching, he was an international correspondent for La Civilta Cattolica and the former editor of America Magazine from 2006 to 2012. Fr. Christiansen was a contributing editor to the Journal of Catholic Social Thought and the Review of Faith in International Affairs, a scholarly quarterly journal. He also co-edited A World Free of Nuclear Weapons, a journal published by Georgetown University Press.

In 1991, Fr. Christiansen was appointed director of the Office of International Justice and Peace of the U.S. Catholic Conference, now the United States Conference of Catholic Bishops. He was a regular consultant to the Holy See on issues of nuclear disarmament, human rights, and religious freedom and dialogue.

On Capitol Hill, he testified about peacekeeping and human rights issues in Bosnia, Israel and Palestine, and China, as well as religious freedoms in Russia. He argued against a reduction in U.S. foreign aid following the Cold War. He also encouraged the bishops’ participation in Catholic discussion about environmental issues and pushed for an end to the use of landmines.

In 2017, he was a part of the Holy See delegation involved in the United Nations’ Treaty on the Prohibition of Nuclear Weapons negotiations. Fr. Christiansen also was involved in the Atlantic Council’s Middle East Task Force. Due to his work in Middle East studies, he was named a Canon of the Holy Sepulcher of Jerusalem. While working for the bishops, Fr. Christiansen made multiple trips to Croatia, Bosnia, Israel, Palestine, Lebanon, Guatemala, Haiti, and Mexico.

This was Fr. Christiansen’s 60th year as a Jesuit. His funeral will be held at Holy Trinity Church in Georgetown, and he will be buried in the university’s on-campus Jesuit cemetery. The date and time of the service is not yet available. 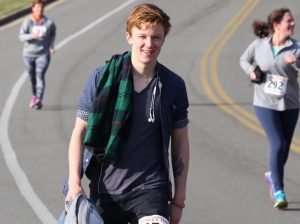