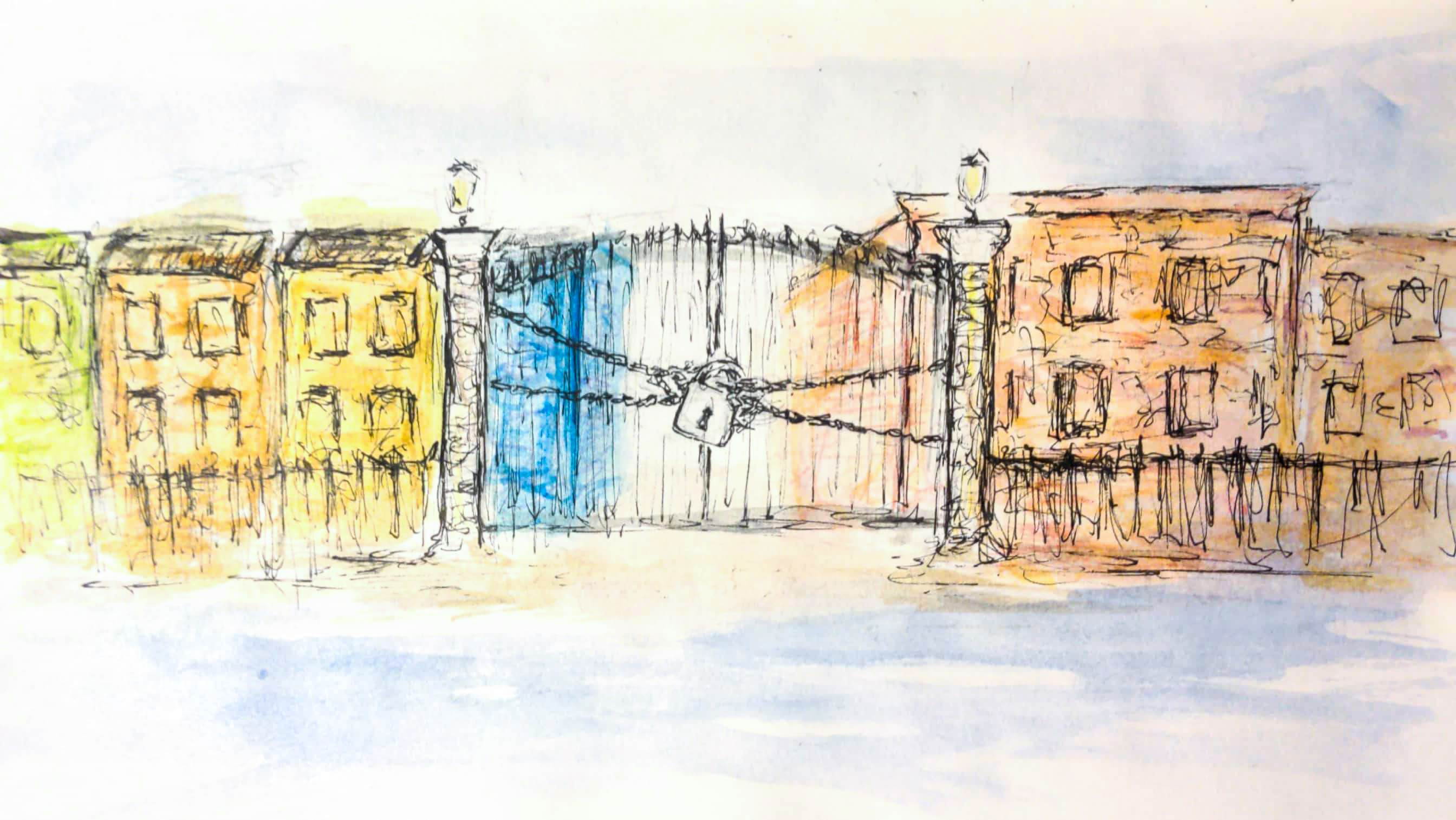 3700 O St. NW is a real-estate hot spot in Washington, D.C. For most of the 6,000 Hoyas that live here, this campus address is home only when classes are in session, as students often leave for breaks and the summer. For the remaining Hoyas, particularly low-income students, the proverbial “home on the Hilltop” holds a more literal meaning.

“We actually live through the university, and depend on the university for many things, because otherwise we could not afford it,” Jenny, a student who lived on campus over the summer and asked to be identified by a pseudonym, told the Voice.

Some students rely on university housing as their only means of accommodation, particularly during periods where school is not formally in session. Georgetown’s current housing policies and at times dismal living conditions pose significant barriers for those students during winter break and the long summer months when many university amenities—especially dining—are limited. In Jenny’s case, she was able to get an on-campus job that came with university housing. “If I didn’t get housing through my job, I’m not really sure what I could have done,” Jenny said.

Jenny, who has relatives in Brooklyn, said staying with them would have been her last resort for the summer. But because those relatives have been undergoing financial hardships, reliable and continuous housing with them was precarious. “It would [have been] unstable housing for the entire summer until I could get back to campus,” Jenny said.

The dilemma Jenny faced at the end of the spring semester is not unique: In spring 2022, 35 students indicated an urgent need for university housing over the upcoming summer, according to Josh Anderson (COL ’25), a member of the GUSA Summer Housing Committee. By the summer, this number increased to 59. “What we were seeing mainly is Hoyas from low-income backgrounds who were at substantial risk of being unhoused,” Anderson said. He added that the indication of urgent need was not only relegated to income status, but also other factors that prevent students from returning to a permanent address, including the presence of abuse, disability status, being an international student, and being an undocumented student.

Nationwide, 43 percent of college students experience housing insecurity. According to the Hope Center for College, Community and Justice, housing insecurity encompasses multiple dimensions of housing challenges surrounding affordability, location safety, and quality of living—and it’s an increasingly prominent issue in the context of rising costs of attendance in higher education.

For students already facing systemic financial discrimination, the challenge of housing stability is only enhanced by the economic segregation at Georgetown.

“Not everyone has the same fight. Everyone struggles in different ways,” Jenny said. “But know that people are not just trying to be mean and take advantage of the institution. It’s just that they actually don’t have the means for it. We’re just stuck and can’t go home.”

There are conditional ways students can obtain campus housing during the summer. Students taking summer classes can apply for campus apartments based on their session start date—for $2,290 per month independent of tuition costs. Besides this, students can apply for two-week transition housing going into the break, seek an on-campus job, or participate in an internship that includes campus housing. None of these options, however, are specifically designed to address housing insecurity.

Due to these limited options, students at risk of housing instability resort to working or interning through the university. Even then, the process for obtaining summer housing isn’t straightforward. Jenny and her peers flagged the lack of communication from Residential Living as a primary concern.

During the 2021-22 academic year, Jenny lived in Village A. When her roommates graduated, she had to move to New South for transitional housing while working her full-time job. After two weeks, she moved into her long-term on-campus summer housing in Henle. But the repetitive moves, which were exhausting and anxiety-inducing, were only the start to the summer housing woes.

What surprised Jenny the most were the living conditions at her Henle apartment. “I lived there for less than a week, because there was a leak in our shower, which led to very bad mold,” she said. “One of my roommates has asthma and she could not breathe.”

Jenny reached out to Residential Living, who reassigned her and her summer roommates to a different Henle. There was no more mold. Instead, Jenny’s kitchen had a busted stovetop, a non-functional fire alarm, and a missing dining table. Moreover, they had one fewer bedroom. Work orders were sent, without response. “[Residential Living] gave us two rooms that were not ready to be lived in,” Jenny recounted.

The lack of attentiveness to students living on campus over the summer is far from one isolated case.

In April, Aiai Price-Smith (COL ’25) was accepted to a Georgetown-affiliated summer internship with guaranteed on-campus housing. She looked forward to spending her summer working with the Georgetown Community Health Division researching the social determinants of health and shadowing at an urgent care facility in D.C. The excitement, however, was quickly disturbed by a growing sense of anxiety. Weeks went by, finals wrapped up, and the program start date inched closer, yet Price-Smith still hadn’t heard a word from Residential Living about her housing assignment.

“It was a difficult time,” she said. “We weren’t sure if [housing] was going to happen.”

Less than 24 hours before the program start date, Residential Living finally responded. “On May 24th I got the email from Res Living. On May 25th I moved onto campus,” she said. Price-Smith explained that this was the first time she received any specific housing information for the summer—including when she had to move, and where she had to move to.

Price-Smith traveled to Georgetown by herself the very next day. “The short notice is very unacceptable and inappropriate, especially given finals and the overall stress of things,” she said. “Knowing that you have to move the next day or the next hour is frustrating.”

As Price-Smith waited for a response from Res Living, she considered alternative housing to ensure she started her internship on time. “I knew that there was at least one person living on campus. I assumed that if I was on campus and had nowhere else to go, I hoped they’d take me in,” she explained. Price-Smith raised particular concerns for underclassmen who may not yet know the ins and outs of university housing. “Imagine being a first-year student and not knowing anyone or where to go.”

Georgetown’s current housing policies hinder students at the highest risk for housing insecurity. During summer and winter breaks, students living on campus—the few granted permission—receive no additional support for  meals, groceries, or laundry. Moreover, they are subject to unsatisfactory living conditions upon move-in: defunct housing facilities, missing furniture, and unsanitary shared spaces, as exemplified through Jenny’s experience. These conditions achieve a basic standard of living but are not enough to create a stable housing environment.

Across the nation, a handful of academic institutions have made efforts to alleviate housing insecurity for students. Most of these schools are state and community colleges, and the initiatives include volunteer-based host families, rechanneling COVID-19 relief funds toward subsidized housing, and safe parking programs that allow students to sleep in their vehicles in a secure campus location. Of course, these measures are themselves short-term solutions only, and greater, more sustainable efforts are needed to tackle the problem.

Georgetown, compared to many of these schools, has the financial capacity to eliminate housing insecurity for its students, according to the GUSA Summer Housing Committee. By their estimate, less than 0.01 percent of Georgetown’s annual budget could provide annual summer housing for a projected 100 students with urgent needs. “Pennies for the university, but a world of a difference for the students we are fighting for,” Anderson said. “When it comes to summer housing, it’s not what the university can afford, but the fact that the university can’t afford not to provide these students housing. We truly can’t afford not to.”

Georgetown students are once again pushing for administrative change in housing policies. In May 2022, the GUSA Summer Housing Committee created a petition that laid out five demands for the administration. First and foremost, it demanded that university-sponsored housing be made available to students facing houselessness during the summer, low-income students with inadequate housing options, LGBTQ+ students who do not reside in a safe home environment, and students experiencing inaccessible medical care.

The committee demanded the implementation of a need-based summer housing portal that is confidential and unobtrusive. The petition urged for accessible and inclusive meal services to accompany campus residency and aimed to ensure that auxiliary living costs, such as laundry and cleaning supplies, would not be incurred by students.

“We needed to show that our fellow students cared deeply about this issue,” Anderson said. “It put us in a stronger position to make sure no Hoya goes unhoused this [upcoming] summer.”

In past years, other summer housing committees have advocated for a more permanent program without much success. When the pandemic evacuated most students from campus in March 2020, Georgetown established temporary stability housing for students unable to return home, charging $1,500 for the entire summer. This discounted cost, however, was still a financial burden for students who remained, and it quadrupled a year later. Moreover, some students who expressed imminent needs, including international students who faced ICE restrictions, were rejected from this stability housing program.

Centering summer stability housing efforts around COVID-19, however, neglects continuing challenges of houselessness. “Homeless and housing insecure students exist and will continue to exist even as we enter the endemic phase,” Axel Abrica (COL ’25), a co-creator of the petition and member of the Housing Committee, said. The petition implored the administration to establish a permanent summer housing plan for students by the end of the 2022 fall semester.

The committee held bi-weekly meetings with university administration over the summer, and the meetings will continue throughout the fall with the goal of establishing a permanent housing policy change. “Our current goal is to have a resolution by January of 2023, which we think will be great because summer housing won’t be in limbo for unhoused students and other marginalized communities up to the 11th hour,” Abrica said.

He added that if talks with the administration lead to a long-term housing solution, Georgetown would be added to the list of pioneer institutions that provide a year-round safety net for its most vulnerable students. Upcoming meetings between the student committee and university administration will center on establishing a housing plan for students needing stability housing over the approaching winter break—a policy that has been long-anticipated by concerned students.

“The continued safety, security and well-being of our students is a top priority for the University,” a university spokesperson told the Voice. “We are continuing to engage with student leaders to discuss a longer-term plan to address the need for support that some students have during breaks in the academic calendar. We appreciate their collaboration in this process and will be sharing more information on next steps later in the semester.”

If Georgetown can commit to stable housing, it would be an essential step in prioritizing the varied financial backgrounds of the students who call the Hilltop home. “I feel like Georgetown really prides itself on its diversity and its strong community. But it still forgets that the diversity and community is actually human,” Jenny said.