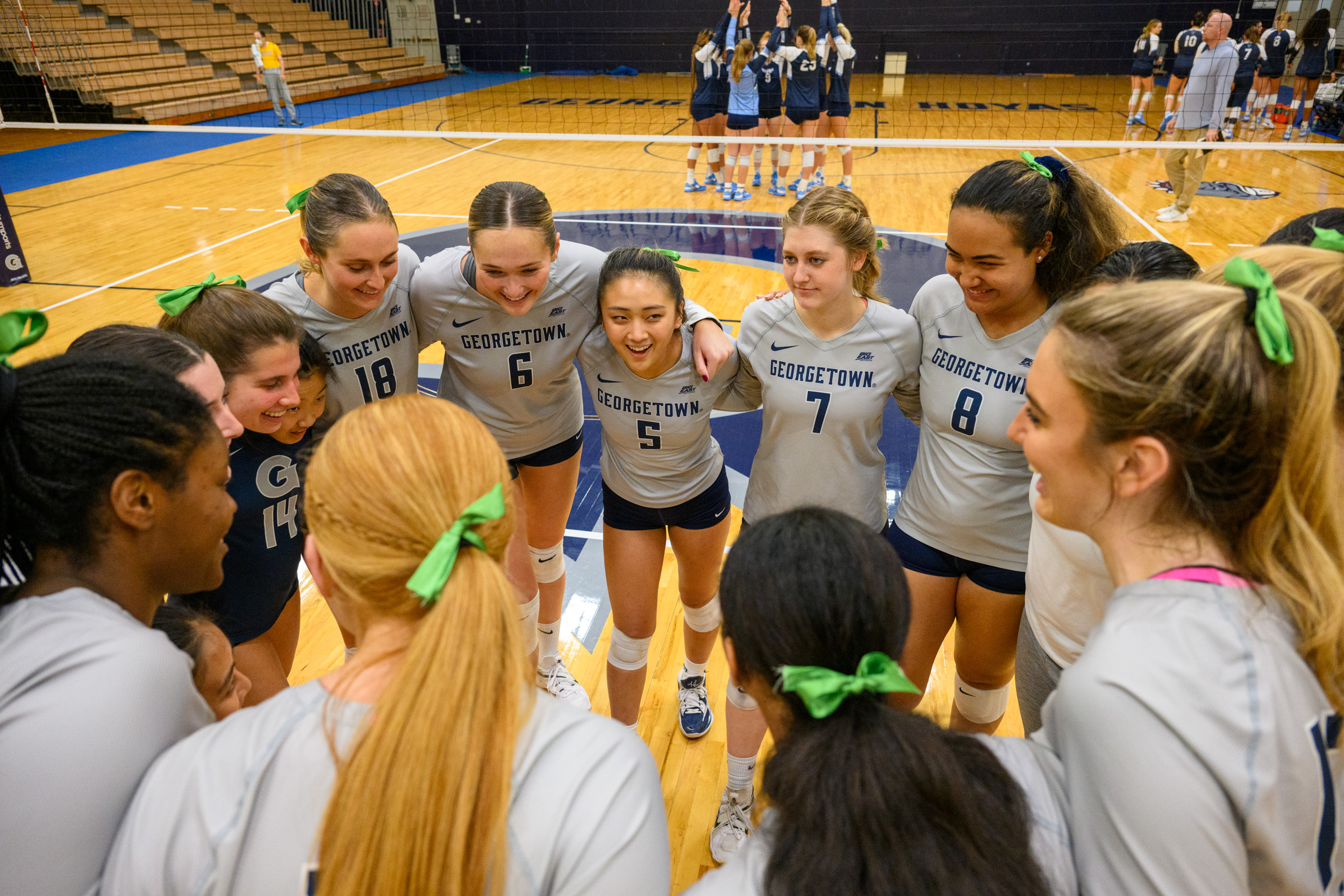 The Georgetown women’s volleyball team (4-17, 2-8 Big East) fell to the No. 18 Creighton Bluejays (18-3, 10-0 Big East) in a 3-0 sweep in McDonough Gymnasium on Saturday. This match-up was important for the Hoyas; not only was it the chance to bring down a goliath, but also a hope to end their four game losing streak. Sophomore Mary Grace Goyena led the Hoyas with 10 kills, while sophomore Karis Park commanded the defensive effort with 10 digs. While the team played well defensively, Creighton’s blockers held Georgetown to only 45 total points.

Georgetown blitzed Creighton early in the first set, scoring three straight before the visitors found their rhythm. Creighton stormed back with a 7-0 run before head coach David Heller called the Hoyas’ first timeout. Ruth Kayongo stopped the Creighton run with a timely feint, making the score 4-10. After being nailed by an errant spike for the Bluejays’ twelfth point, Goyena struggled to find daylight past the Creighton defenders. Though she regained her dominance later in the game,the Bluejays defense seemed to form an impenetrable wall during the first set, severely hampering the Hoyas. The set concluded in a 25-13 Bluejays win.

Emma Plutnicki started the second set with a timely block, creating a rally for Georgetown that pulled the team even with Creighton at 4-4. The Bluejays came back, though, ripping a 9-0 run against the Hoyas and bringing the score to a dominant 13-5 in favor of the visitors. Another service error by the Bluejays gave the Hoyas the 6th point at 16-6. Still, Georgetown could not capitalize offensively and lost the set 25-12.

In the third and game-ending set for the Hoyas, Georgetown began to click in all phases of the game. Chanelle Smith rejected a Creighton spike for the team’s second point, and Park hustled for a nice dig for another score. The Bluejays’ Jaela Zimmerman then fired four aces to bring the score to 8-4 in her team’s favor. Georgetown closed the gap with critical spikes by Brennan Wilhite and Goyena. Strong Hoya defense was the story of the third set. Excellent communication between the team and heads-up plays allowing Creighton spikes to soar out-of-bounds gave the Hoyas a chance to steal a set. Ellie Watkins had a crucial serving run late, and Goyena stunned the Bluejays with a well-timed kill, setting the Hoyas within two at 22-20. Creighton called a timeout, which killed Georgetown’s momentum and allowed the visitors to breeze to a 25-20 victory.

Georgetown’s Cinderella spirit sadly could not bring down Creighton, who is first in the Big East conference. As the season’s end draws near, the team can continue to build their stellar defensive effort and develop for 2023. Looking ahead, the Hoyas will prepare to face the UConn Huskies (11-10, 5-5 Big East) at home on Friday, Oct. 29 at 5 p.m. For continued coverage of all Georgetown sports, follow @GUVoiceSports on Twitter.