Up, up, and unemployed

Americans are constantly struggling to balance their work and family lives. As deeply ingrained as the Protestant work ethic may be, those who choose to focus on their careers are often written off as workaholics with misplaced priorities. Director Jason Reitman’s latest film, Up in the Air, deftly examines the role that work plays in defining our relationships and our self-identity in these tough economic times.
The film opens with Ryan Bingham (George Clooney), a professional traveling corporate downsizer, telling Steve (Zach Galifianakis) that he is being let go. But the film takes an unexpected turn immediately after the firing, combining satirical comedy with recession-themed melancholy to show what would have happened if Bingham had not fired Steve. 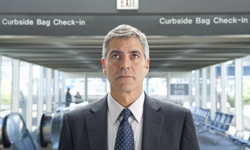 Clooney is brilliant as the perpetual traveler Bingham, a man who is able to fit his entire life into a carry-on suitcase, moving from one assignment to the next without friends or family to hold him back. While Bingham is little more than a brash cardboard cutout of a character at first, Clooney gives him a vulnerability that quickly turns the character into a believable, empathetic person.

Threatening his job—and, by extension, his deliberately Odyssean lifestyle—is Anna Kendrick (Vera Farmiga), a brash young MBA graduate who hopes to have all firings performed over the Internet via webcam. Their budding romance takes the usual twists and turns, but Clooney and Farmiga imbue it with enough passion and care to make a predictable love story enjoyable and entertaining.

Reitman interviewed 100 unemployed people during filming and included some of the resulting footage in Up in the Air. Although only 22 made it into the final cut of the film, they speak candidly about what it’s like to lose a job in a struggling economy. Some rage and scream, others break down crying on camera. Most are just thankful that they have their families to support them.

However, Up in the Air does not take the easy way out—blandly extolling the unparalleled virtues of a family. Again and again, any character in the film that chooses family over professional fulfillment ends up disappointed. Reitman is not necessarily trying to say that family is less important than American culture would have us believe, just that a job is more important than Hollywood has told us. The film insists that it’s okay—healthy, even—to derive a sense of self-worth or self-identity from your career.

The film may hit many predictable notes, but with an amazing cast and a bracing look at the current economic state of America that would make Barbara Ehrenreich blush, Reitman won’t be standing in an unemployment line anytime soon, if there’s any justice—comic or otherwise—left in this world. 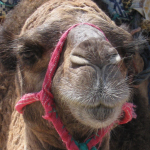