Astounding Trojan Barbie takes on a life of its own 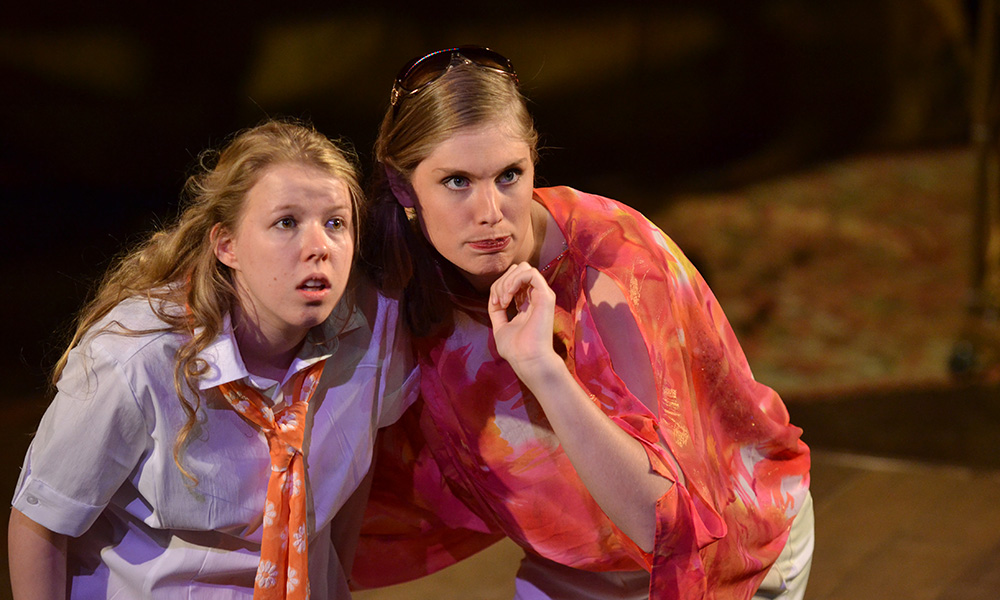 Walking into Gonda Theater and seeing a Barbie doll’s limbs tied on cords is a bit of a shocking sight. At first, you think it’s just a child’s room gone horribly wrong, when in reality, it means so much more. As grotesque as it appears, it conceals profound conflict beneath the surface.

Trojan Barbie is the last production of Georgetown’s 2012-2013 “War and Peace” series, and truly ends the production season with a bang. A jarring piece with moments of great levity, the liberal adaptation of Euripides’ Trojan Women expertly ties together the aftermath of the Trojan War with the Iraq War, brilliantly transitioning from past to present. Instead of presenting only one side, the play addresses the plights of both the women imprisoned after the two wars and the soldiers keeping them captive, allowing audience members to sympathize with both parties and comprehend the intensity of such dire circumstances.

Each actor brilliantly steps into the shoes of such dynamic, troubled characters. Ryan Bouton (COL ‘13) and Charley Biddle (COL ‘16) fill the challenging roles of Jorge and Max, two soldiers that must escort Polly X to a new life. While Jorge grapples between duty and sentimental feelings, Max begins to crack under the pressures and loneliness of a military life. Polly X, played by Zoë Lillian (COL ’13) transcends time, appearing in both Troy and Iraq as a girl wishing for a more exciting life outside of the oppressive camps. Although Mica, played by Ben Prout (COL ’15) has a rough exterior and exhibits great brutality, his inner monologue reveals the soft exterior of a boy who merely wishes to go home to the States.

There are many elements that make Trojan Barbie special: its multiple layers of realism, references to both classical literature and current events, and deep insights into every form of loss imaginable trigger different responses and reactions for its audience. For each moment of levity, such as a fantastical dance scene, the realities of loss, devastation, and the aftermath of war brings us back, making the crash harder than ever. The audience feels each blow, each ray of hope, and each moment of concern for a safer future—the signs of wonderful acting, great directing, and beautiful writing.

Part of playwright and new faculty member Christine Evans’s collection War Plays, which also includes Mother Gun and Slow Falling Bird, Trojan Barbie explores themes of conflict that characterize much of her work. Considered within the context of modern tourism and everyday life, however, it reflects a dichotomy of the ordinary and the extraordinary that Evans notes to be her creative focus.

When asked about her writing style, Evans emphasized that she likes to “find the mysterious and strange within the known.” She added, “I’m interested in work that puts things in a particular poetic lens, but has some sort of dialogue with political and social life.”

In conjunction with Evans’s artistic priorities, Maya Roth, the play’s director as well as the Director of Theater & Performance Studies, hopes that the play will “open the historical imagination and international connection.” She added, “There’s something about the way this story is so complex… . It may create some space for respect for the psychic and social toll of loss, both the human and cultural scale.”

It’s rare that something so astoundingly original can come out of an adaptation of an ancient Greek tragedy, yet Trojan Barbie proves how the human experience of loss and love endures in a fresh and captivating way. A modern interpretation of a classic, then, becomes a masterpiece in its own right.