Farbiarz illustrates the art of war

Georgetown is a maze of shops and stores that cover every street like a well-worn sweater. Students flock to Safeway for their groceries and to Sweetgreen, Georgetown Cupcakes, and Baked & Wired for their meals and snacks. But there are also thrift shops, used book stores, and art galleries that represent the small, local businesses that reside in the D.C. area. These shops each have their own flare, and Heiner Contemporary—with its newest exhibit “Take Me With You”—is no exception.

Partially hidden on a corner with a flamboyantly pink door, Heiner Contemporary is a small, simple room hung with paintings and collages, the vibrant reds and black calligraphic ribbons of which contrast starkly with the clean white walls. However, the tone of these works of art is surprisingly darker than the cheerfully painted door would suggest. Images of dead soldiers and politicians transport us back to violent times in humanity, when men’s bodies were as thin as twigs from hunger and malnourishment. But who made the art, and why would they want to make it? The answer to both questions was right in the middle of the room.

Sitting in front of a little wooden table in the center of her works, Rachel Farbiarz looked focused. Her left hand held a piece of paper the size of her body and her right hand moved in a flurry of strokes as she worked on her next piece. A graduate from Harvard University and Yale Law School, she never planned on becoming an artist. When asked how she developed her talent, especially for calligraphy, she casually responded, “I just did it on my own and learned.”

Most of her works are a commentary on social life. One piece is composed entirely of colored flags hanging over a contrastingly black-and-white cluster of dead bodies. In the corner, a Japanese soldier bows, showing respect to the fallen. In another collage, rifles arranged like a forest cover half of the page. Most of her inspiration comes from the news, and she uses her art as a way to broadcast political issues occurring around the globe.

What makes Farbiarz stand out among the dozens of other artists that can be found around the Georgetown area is her distinctive use of mixed media. She began with just drawing, but eventually she encountered a dilemma: her works took an eternity to finish. In order to cut down the amount of time, she found that collages came in handy. Now she’s fully incorporated them into her work. Her color schemes also stand out, utilizing one color—usually red—and placing it sparsely throughout the image. The color choice, accompanied with images of death and suffering, creates powerful pieces that accurately portray the evils of war and conflict.

The dedication that Farbiarz puts into her work makes it all the more effective. While people walk the small gallery and view her artwork, she is busy creating yet another piece one line at a time. After a conversation with Farbiarz, it’s plain to see that she uses her pen to translate her thoughts to art, shedding light on dark topics with dark strokes. 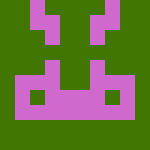