When most people think about a college spring break, they imagine sun-soaked beaches, palm trees, and friends clinking Coronas. They don’t usually picture embarking on a road trip to Montreal, Canada with their sister and mother. Though not a typical spring vacation, my family and I explored Montreal for three days last week. Visiting the Musée des Beaux-Arts was an instant highlight for me. Below are two of my favorite pieces from the gallery, which was full of portals for exploring the history of Montreal as well as its present atmosphere and culture. 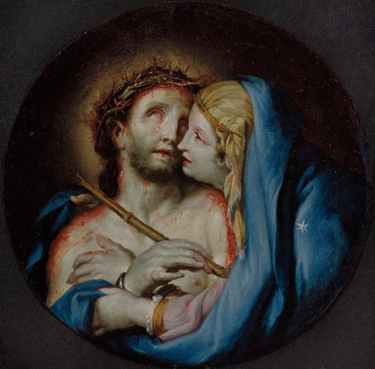 Claude Françios’ oil on copper painting The Virgin Embracing Christ and the Reed transports the viewer back to Montreal’s founding. When the French colonized the island of Montreal in the early 17th century, they dedicated their new town to the Virgin and used it as a missionary outpost. François’ pre-1670 painting exemplifies the city’s missionary roots by using raw emotion to engage the feelings and interests of the viewers. In the painting, a bloody Christ wears a crown of thorns while Mary wraps her arms around him to soothe his pain. To focus attention on the figures and their suffering, François painted them on a black, circular background. The chiaroscuro (contrast between light and dark tones) and detailed facial expressions create tension and drama. Drops of Christ’s sweat and blood speckle his forehead and cheeks while the Virgin’s eyes appear red from crying. Just as artists used dramatic images to pull people back to Catholicism during the Counter-Reformation, François painted intense emotions to capture the hearts of converts and encourage the missionaries in 17th century Montreal. 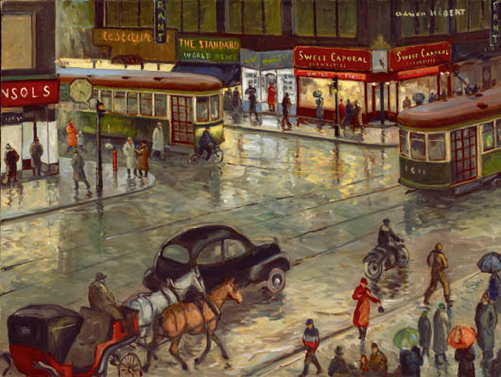 Since its original missionary phase, the city’s culture has changed drastically. In Corner Peel and Sainte-Catherine, Adrien Hébert succeeds in capturing the bustling, inviting atmosphere of modernized Montreal. Painted around 1948, Hébert’s work illustrates the growth and globalization that has occurred since François’ time. In the painting, two streetcars slide along tracks on Peel and Sainte-Catherine St and a car and horse-drawn buggy bump along the cobbled road. The sidewalks are just large enough to accommodate the throng of pedestrians wearing orange, red, and gray coats and using umbrellas as shelter from the soft rain. Glowing shop windows brighten the scene and reflect their yellow light on the wet stone street. In the top left of the painting, a world newsstand shows that Montreal is integrated and interested in global affairs. While visiting, I experienced Montreal’s past and present through stone buildings in Vieux-Montreal and glass towers on Rue René-Lévesque. I tasted diversity in the tender roasted chicken in little Lisbon and dumplings in Chinatown. Hébert’s painting captured the spirit and atmosphere I found while exploring Montreal’s bustling streets and quartiers.

More information on the “Quebec and Canadian Art” Collection at The Musée des Beaux-arts in Montreal, Canada can by found at their website.

How to Appreciate Brisk Winter Runs