When it comes right down to it, the Croatians are a fun team to watch. Sadly, despite putting on good shows, they have performed less than admirably these past 12 months against national squads like Scotland, Switzerland, and Serbia (something about S countries gets ‘em).

Despite faltering, the Mediterranean’s boast an impressive squad and will head to South America this summer feeling decent about their chances of making it out of a tough group.

The Croatian’s are capable of playing good soccer, and merit a viewing or two come June, even if it’s just because they’re playing against a higher profile team.

After a century of caps, it’s likely that veteran goalie Stipe Pletikosa will return to the starting lineup in Brazil. The Rostov keeper is getting up there in years, but is more than capable of producing moments of magic when required. The duty of backing him up will fall to Danijel Subašić, who’s currently plying his trade in Monaco alongside some of the soccer world’s biggest names. He might even add a Ligue 1 title to his trophy case at the end of his season.

For the most part, the Croatian defense isn’t up for too much debate. Southampton hardman Dejan Lovren will board the plane to South America thanks to admirable performances in his first season in the Premier League. The experience gained at the greatest stage in the world will only serve to further his already impressive resume. Lining up alongside the rising star is the BPL outcast Vedran Corluka, who after five seasons playing for Manchester City and Tottenham, transferred to Lokomotiv Moscow. Despite playing well at a number of defensive positions, his country needs him most in the center.

Lining up on the flanks are two players who couldn’t be further apart in stature. Darjo Srna, the most capped player in the senior side’s history and beloved Shakhtar Donetsk servant, will head to his fifth international tournament and line up on the ride flank. Opposite him, low profile Ivan Strinić of FC Dnipro will hope teams don’t try and expose him as the obvious defensive weakness.

This Croatian midfield is perhaps the most exciting it’s been in years. There’s no question that La Liga stars Luka Modrić and Ivan Rakitić will headline as one of the most creative midfield duos in the whole competition. Lining up on either side of them are utility players. Danijel Pranjić is a likely candidate to occupy the left side of the park if manager Niko Kovač decides to play down the wings (he totally should). The former Bayern Munich man might also be asked to drop to left back if Strinić can’t handle the Brazilian heat. Unfortunately for the Croats, their best right midfielder, Srna, also happens to be their best right back. In his absence, VFL Wolfsburg winger Ivan Perišić is a capable deputy.

Perhaps the best reason for Croatia to play up the wings is its selection of forwards. During his time in the Bundesliga, Mario Mandžukić has proven again and again that there’s no one better in the air, except maybe the Florence based German he replaced. His teammates will be happy to play the ball up the outside channels and serve him crosses all day long against defenses like those of Mexico and Cameroon. Backing him up will be Hull City striker Nikica Jelavić. Frankly, the tiger has failed to assert himself in the Premier League since arriving from Rangers F.C. in 2011. However, he’s the best Croatia have to offer behind Super Mario.

WHAT WE HOPE TO SEE:

The way Halftime sees it, Croatia have two options in Brazil:

1. They play a very straight-laced squad, put their best foot forward, and pray that they perform well against Mexico and Cameroon (Brazil is a whole different beast). They have a decent chance at finishing second in the group… but recent history shows that Croatia can struggle in winnable games.

2. Croatia wake up and smell the roses. Knowing that there’s every chance the group stage will be as far as they go, they decide to deploy some of their most exciting young prospects in the hopes that one of them lights up the world stage and puts the small Mediterranean nation back on the footballing map. How crazy would it be if Mateo Kovačić, despite his 19 years, gave the crowd a reason to pick their jaws up off the floor? How batshit insane would it be if 17-year-old Alen Halilović, the youngest goal scorer in the Croatian league and youngest-capped senior player, were to truly impress upon the world his untapped potential and talent? What an absolute legend that would be if he single handedly skinned the Indomitable Lions, or brought the Brazilian samba to a screeching halt.

How Croatia picks its team and performs at the World Cup will depend entirely on their mentality. Playing it safe might not get them as far as they could reasonably expect to go. On the other hand, gambling could be their making or undoing in Brazil 2014. Kovač certainly has a lot to mull over before he selects his team.

Michael Vick’s Second Chance is good for the NFL
Sound it out, dear 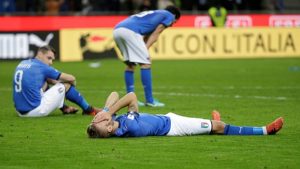