If there ever was a “Most Interesting Man in the World,” he would be named Mario Balotelli.

On the pitch, he’s one of the most captivating figures in professional sports. His critics call him “erratic” and “crazy,” two claims that even his biggest fans would have trouble denying. The striker, nicknamed “Super Mario”, is one of soccer’s most gifted athletes; a player who is capable of making the difference in any contest. Despite his impressive tactical and athletic prowess, his occasional on-field meltdowns and whimsical attitude during important contests have made him reviled as well as renowned throughout the world of soccer.

Balotelli’s eccentric nature is conveyed through his persona on the pitch, but it is his off-field antics that often steal headlines in newspapers and tabloids all across Europe.

He was once arrested for breaking into his own house.

After he lit off fireworks in his own bathroom during a house party that could have burned his property to the ground, a crew of firefighters worked for hours trying to prevent the fire from demolishing the whole house. Weeks later, after having to temporarily move into another house, he missed the many things from his old house and decided to break in through a window and take several electric appliances to his new property. As he tried to carry a flat-screen television from the house in the middle of the night, neighbors mistook Balotelli for a thief and reported a burglary to the local police.

He once drove to a local college just to use the school’s restrooms.

In January of 2012, Mario parked his Bentley in the parking lot of Xavier College in Manchester and casually strolled into the school’s dining hall. When local news organizations arrived at the scene, they asked some of the students to explain why one of the Premier League’s biggest stars was paying a visit to the small college. Reportedly, he walked into the dining hall so he could ask a few of the mystified teenagers to direct him to the closest restroom. After he used the facilities, he walked into the teacher’s lounge with a few of his friends in order to meet some of the school’s faculty.

He once was pulled over by a policeman on the highway, and when the officer asked why he had £25,000 cash sitting beside him on the passenger seat, he replied, “Because I’m rich.”

After Balotelli agreed to return to the Premier League for Liverpool F.C. on August 21st, 2014, it took him only two days to begin butting heads with the club’s management. Reportedly, Balotelli preferred to live and raise his family closer to Manchester, but some of the directors or Liverpool F.C. hoped to keep the Italian star closer to Liverpool so that the team’s older players could help keep him out of the headlines.

Balotelli never ceases to fascinate and amuse fans. He is a contradiction, a youthful spirit stuck inside a beast-like frame. Just this week, Balotelli stole headlines after tweeting “Man Utd…LOL” minutes after United’s 5-3 collapse against lowly Leicester City.

But, the rest of the soccer community does not always look so kindly on Balotelli.  The Manchester United tweet amassed more than 175,000 retweets within ten hours and sparked thousands of hateful and racist responses from fans around the world.

In October of 2011 after scoring a goal in Manchester City’s 6-1 win against rivals United, the 21-year-old striker lifted up his jersey to reveal an undershirt that read “Why Always Me?”, a statement in response to the many discriminatory remarks that he had confronted throughout his lifetime. Born to two poor Ghanian parents who immigrated to Italy, Balotelli was put into foster care at the age of two. He was adopted by a compassionate Italian family, who raised him as their own child.

A decade before he was “Super Mario,” Balotelli was just a young boy who had faced discrimination and prejudices as a young, black Italian destined for international stardom. Even as an 18-year-old going to represent Italy in the 2009 European Under-21 Championships, the striker was pelted with bananas by hecklers in a bar in Rome.

So, despite his antics, I have to admire Mario Balotelli.  He has become one of my favorite athletes in all of sports.  He has dealt with more adversity than most, and therefore I can forgive the occasional idiosyncrasy.  He may be eccentric, dramatic, and even be a little bit crazy, but more than any other player, he deserves to be called “super.” 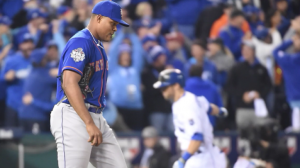