In their self-titled freshman album, Haerts crashes 80’s new wave into modern synth sound. However, this crash often comes with the calamity of too many genre-bending, mottled tracks. The majority of the album is vapid as it is unclear what emotional image Haerts seeks to portray. Despite these rough patches, the band gains its footing through the distinct 80’s and 90’s new wave-pop roots. Unfortunately, the band seems incapable of total originality, for its only successful works rely far too heavily on artists of the past.

The album’s ill-timed blends create a redundant, dull, patchy sound. At its best points, the album changes style to include, staccato vocal quips and upbeat bursts to keep things interesting. However, an imperative of well-made music is originality. “No One Needs To Know” utilizes these techniques, yet only by forcing Prince and Haim together into something dancey and energetic. In a similar fashion, “Call My Name” begins with a fun, soft, Cyndi Lauper-style synth. This is a more successful use of Fabi’s morose vocals. More assertive choruses and sudden transitions blend well, yet again only by relying far too heavily 80’s reminiscent style to break the pattern. This creates a pleasant sound, yet what can this band truly present for itself?

But the biggest musical issues stem from how the singing blends with the backgroundmusic. The leader singer, Nini Fabi, favors a sweeping, drawn out style that comes off as dull and droning after the first minute or so of a track. Fabi is mimicking successful  Bat for Lashes and Fiona Apple-type techniques, but for two long and with her own, unpleasant interpretations.The overall sound is cacophonous with misused drums, synth, and guitar. It sounds like two different songs overlaying each other. Although inserted vocal licks and group sung sections help cushion the blow, this pitfall greatly hurts tracks like “Hope” and “Wings.”

In their eponymous debut, Haerts pays a great deal of combined tribute to artists from Chrissie Hynde to Sky Ferreira. Unfortunately, this proves it difficult for the band to claim ownership to something fresh and new. There are enjoyable songs on this album, but only when the artist jams the roots of the new wave pop to the present together. The band certainly tries to create something new, yet but the results is, at this point, the weakest aspect of their music.

Voice Choices: “No One Needs to Know,” “Be the One” 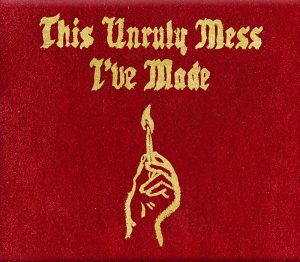