For almost my entire life, I have lived in a world that is nearly defined by terrorism and images of terrorism. My first week of second grade was interrupted by planes crashing into buildings 45 minutes south of my house.  I distinctly remember a grandiose statue of a Middle Eastern dictator toppling over on the TV as I sat in my doctor’s waiting room not long after.

Last year, I ate an entire bag of popcorn during Lone Survivor, a Hollywood action movie depicting the single largest loss of American soldiers in decades.

Ever since 9/11, I have not been able to  put on the TV or read news online without navigating around stories about bombs being dropped on dusty, desert cities or American soldiers, some  younger than I am now, getting incinerated in explosions.

It is horrifying, it is disturbing, and I see it every day. And yet, I am not that affected by it all. At least, it seems like the horror of my nation’s apparently endless, continent-spanning war against hateful extremists should affect me more than it does. But it doesn’t, and I feel that I am not alone in that regard. In fact, I believe that the constant war and violence is turning the U.S. into a country full of complacent and ignorant voters who are content with the unscrupulous use of warfare.

The so-called “War on Terror” is a unique phenomenon in American history. For the first time, the U.S. has committed to wage war not on a nation defined by geographic borders to achieve clear military objectives but, instead, on al-Qaeda and its fellow travelers – organizations which are defined more by their radical ideologies and far less by  concrete geographic centers. Since the “War on Terror” began, al-Qaeda alone has since diffused into countless groups in multiple countries: the Islamic State in Iraq and Syria, Boko Haram in Nigeria, al-Shabaab in Somalia. The list goes on and on.

The “War on Terror,” in terms of any definitive military victory, is a hopeless folly. JFK once said, “a man may die, nations may rise and fall, but an idea lives on.” That’s what al-Qaeda and its affiliates are: an ideology, a set of beliefs, not a nation. That ideology won’t crumble like a shelled building or collapse like the target of an American sniper rifle. Militant Islam cannot be addressed with violence because it grows and strengthens its resolve in the face of violence. For every Osama bin Laden and Abu Musab al-Zarqawi the U.S. and its allies obliterate, another rises, ready to  take their place. The spiral of   conflict continues:  the  wounds and the hatred  deepen. In retrospect, declaring a “War on Terror” made about as much sense as declaring a “War on Hate” or a “War on Violence,” as if you could kill an idea with a bomb.

In the meantime, while the U.S. struggles to redefine and reassess this  conflict, American soldiers and innocent civilians die, and the American public grows increasingly accustomed to being a nation at war. A ludicrous callousness has developed towards our nation’s use of violence. In the Iraq War alone (which, in many ways, has not ended), at least 100,000 Iraqis and about 4,500 American soldiers died.Some  of those soldiers who didn’t lose life or limb on the battlefield took their own lives because they couldn’t live with the things they saw and did in the theater of war. And yet, there are those in this country who want more bloodshed, more bombs, and more bullets.

Following the attack on Charlie Hebdo in Paris, Fox News host Jeanine Pirro called for the mass armament of Muslims to destroy radical Islamists. Not only does Pirro’s diatribe neglect the fact that the last time the U.S. did that, we helped create the Taliban, but it reflects how much our country has demonized the Middle East and sees violence as the only way to win.

Pirro is wrong. Violence is not the solution to the problems in the Middle East, and it will not serve to keep the U.S. safe in the long-term. I do not know how to achieve peace in the  Middle East. No one does, although any keyboard-wielding political commentator is sure to give you what they think is the definitive solution.

What  I do know is  that we cannot sit by while our country commits to the broad use of violence across the globe, promoting a bloated conflict through its second decade of existence. We must demand a more critical approach to how we decide to use violence.

Pirro may be right about one thing, however, and it was about what I fear most: “This is not going to stop.”

Come back, Voltaire: Free Speech in the wake of Charlie Hebdo 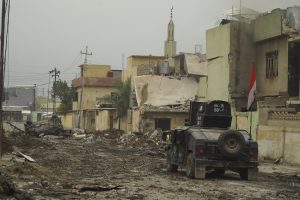 The Philippine Insurrection and the war against Pancho Villa have some similarities to the current war on al-Qaeda.

“We must demand a more critical approach to how we decide to use violence.”

So what do you suggest?