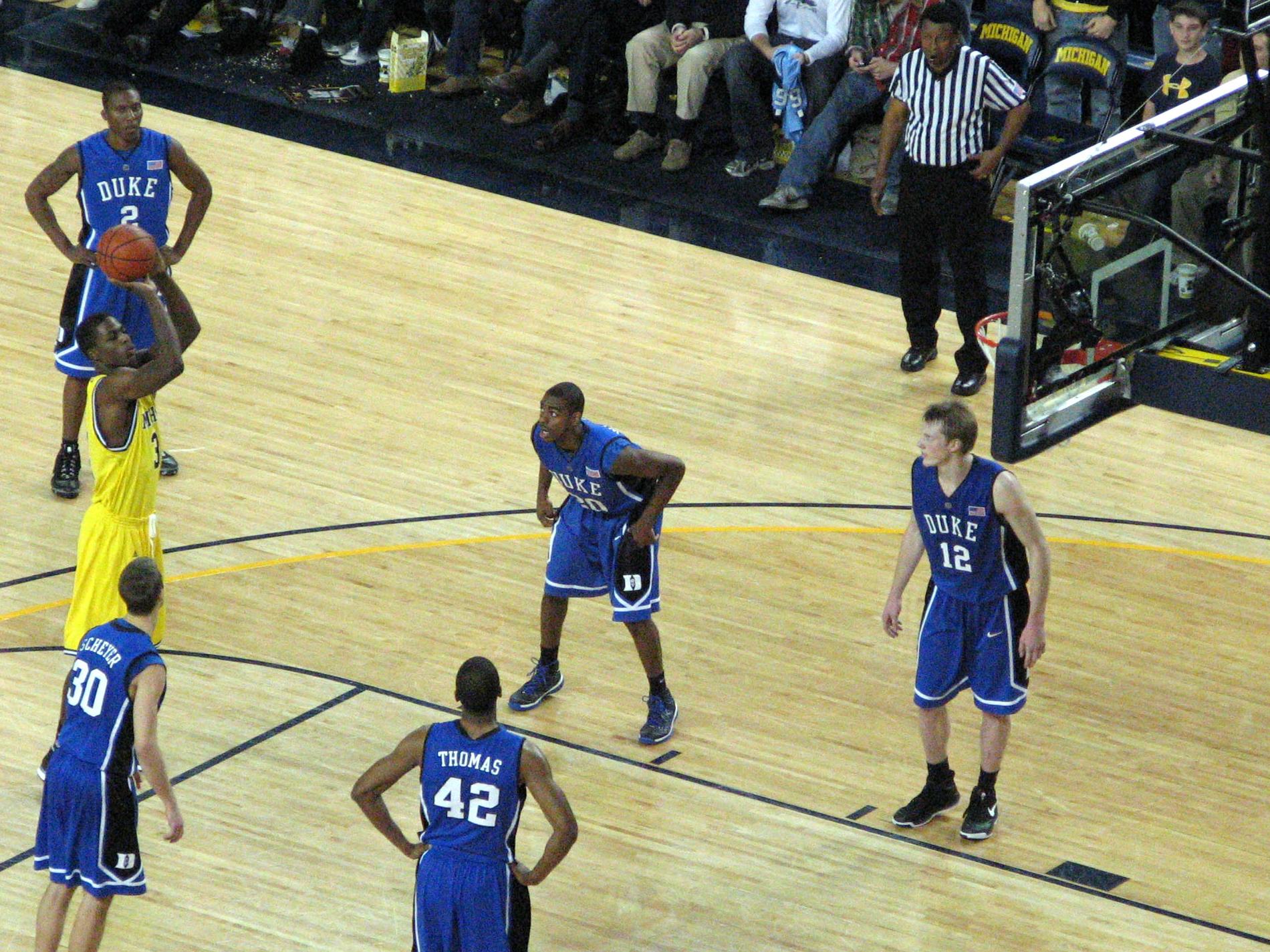 How many times have you seen a close college basketball game come down to the wire with one team up only a few points on another? It happens a lot, and foul shots are critical in these situations.  If you miss, you give the opponent an opportunity to either tie or win the game that they would otherwise not possess.  Strategy is critical at these junctures, and if you choose correctly, a team can give itself a chance to win that it otherwise might not have.  Let’s take a look at a couple of situations to illustrate what I’m talking about.

On Saturday, January 31st, Duke and UVA played a thriller that was decided in the final seconds of the game.  Duke rallied to come back and led by three with 42 seconds remaining.  Duke held the ball and UVA chose not to foul and Tyus Jones delivered the knockout punch, hitting a three to put Duke up 69-63 with only 5.5 seconds left on the game clock.  Tony Bennett is a great coach, but choosing not to foul in this spot was just stupid.  If Duke, as they did, hits a shot at the end of the shot clock, the game is over and UVA has no chance of a comeback.  If UVA had fouled immediately, at least there is a chance that Duke will miss the free throws and there will still be plenty of time on the clock for a comeback rather than pretty much no chance of one.  Coaches need to understand that time is of the essence, and in this case, fouling is necessary.

Now let me give you a case in which I believe fouling is not necessary.  If a team is up only one point with at least 45 seconds left, I would argue that you should not foul and should instead  simply play defense.  The worst case scenario in this case is if the other team hits a three, the game is pretty much over.  It is therefore crucial to emphasize that the defensive team guard the perimeter and not allow a three.  Hopefully the defense can force a bad shot or a turnover, and then the defensive team will have at least 10 seconds left to hit a game-winning shot.  Even if the offense hits a 2-point shot, you will have at least 10 seconds to tie it up with a three.  A simple two point difference completely shifts my strategy and I believe this is the idea coaches should follow.  If the game clock is below 45 seconds, I think that a foul should be given in order to extend the game because I don’t think six or seven seconds is enough time to rescue a team from deep trouble.

The next situation to consider is what to do if you are winning and have the opportunity to foul.  Obviously this would only be a consideration if you are winning by three  points and there is little time left.  My argument here is that I would foul if I were winning by three if the game clock is below 10 seconds.  I’ve seen too many games in which  a team is down three points only to hit a three and tie it up.  If you foul then there is no chance of that actually happening, although there is some risk in it.  Fouling a three point shooter in this situation would be disastrous, and it is something that should not ever happen.  To prevent this, I recommend a somewhat illegal but effective strategy: The off-ball foul.  By doing this, you essentially choose who you want to be on the free throw line and there is no risk of fouling a shooter.  The only drawback is that it cannot be blatantly obvious or a flagrant foul would be called.  A simple grab or hold of a cutter will do, and then there is a guarantee that a three will not be hit on the possession.  Now all the winning team has to do is secure the rebound on the second free throw instead of sweating out a miracle three in order to win a basketball game.

It might not seem like strategy plays a huge role in college basketball, but in the final minutes it absolutely does.  Picking the correct and strategy and fouling the correct players is crucial to winning and making a comeback in games.  If a coach follows these rules, I believe that he will put his team in the best position to win games.  To recap, here are the rules I’ve set forth: