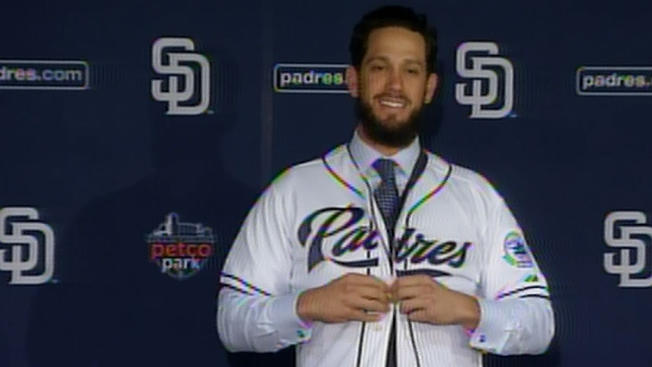 With pitchers and catchers set to report to Spring Training this week, the proverbial “hope springs eternal,” which sustains baseball fans through the cold winter months, is nearing its conclusion. This hope is particularly palpable for fans of the San Diego Padres, after a flurry of offseason moves hope to whisk the club away from perennial obscurity and into pennant contention.

It’s not simply that the Padres have struggled on the field, having only made the playoffs five times in the franchise’s 45 year history. The Padres have been largely insignificant and often forgettable within the national baseball landscape, which, having experienced this status as a fan of the Tampa Bay Rays before the team’s recent revival, is not an exciting place to be.

This season, however, the Padres will assuredly be in the thick of things, after one of the most aggressive offseasons in recent memory. Through several trades and free agent acquisitions, the Padres have rapidly retooled their depth chart, with particular focus on their pitching staff and their outfield.

The Padres have completely revamped their outfield, by bringing in three high- profile players who they hope to be a huge upgrade over the serviceable, but not extraordinary unit of Seth Smith, Will Venable, and Cameron Maybin. For the 2015 season, the Padres’ outfield will consist of former Dodger Matt Kemp, former Brave Justin Upton, and former Ray Wil Myers.

In Kemp and Upton, the Padres are getting five-tool players who, in the not-too-distant past would have been considered among the best outfielders in the majors, with Kemp’s potential fully on display in his 2011 NL MVP runner-up season and Upton’s in spurts with the Diamondbacks and Braves. In recent years, however, Kemp has battled injuries and Upton has struggled with inconsistency. Myers too has battled injuries, struggling last season after coming off of an impressive 2013 debut in which he received Rookie of the Year honors. If their new outfielders can address their respective issues, the Padres will assuredly have one of the best, if not the best, outfield units in baseball.

Coupled with their star-studded outfield, the Padres’ infield is anchored by two solid returning corner infielders, third baseman Yangervis Solarte and first baseman Yonder Alonso. The Padres also traded for All-Star catcher Derek Norris, who had a breakout season last year with the A’s, and former Red Sox third baseman Will Middlebrooks, who provides depth in the infield.

The Padres also revamped their pitching staff, most notably by signing ace James Shields, who led the stellar Royals’ rotation last season, en route to a World Series appearance. By adding an established Opening Day starter in Shields, the Padres solidified their rotation, which had been anchored previously by Andrew Cashner, who, while not a dominant ace in himself, is a more-than-qualified number-two starter.

The Padres also returned Tyson Ross and Ian Kennedy, both of whom posted solid seasons in 2014, to occupy the third and fourth spots in their rotation, respectively. They signed veteran arms Brandon Morrow and Josh Johnson, to both serve as bottom-of-the-rotation starters and as middle relief pitchers. They bolstered their bullpen by trading for Brandon Maurer and Shawn Kelley, both of whom will serve as set-up men.

Despite all of these additions, Padres fans should be cautious in their optimism. Most teams in recent years that manage to create contenders out of previous pretenders did so through development in their farm system, as the 2008 Rays, the 2012 Orioles, 2012 Nationals, the 2014 Royals, and, expectedly, the 2015 Cubs, by and large, have done. The most recent instance of a team attempting a similar offseason overhaul, the 2013 Blue Jays, was entirely unsuccessful, as the Blue Jays finished last in the AL East. Additionally, the Padres face a very tough road to the playoffs, stuck in the same division as the formidable Dodgers and defending champion Giants.

Nevertheless, it’s finally an exciting time to be a Padres fan.