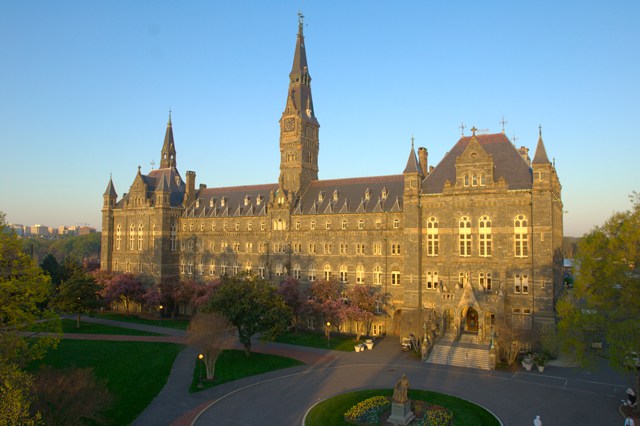 Georgetown graduate students are seeking stronger and more formalized representation through unionization, a growing trend nationally at private universities since an Aug. 23, 2016 ruling by the National Labor Relations Board (NLRB) allowing such organization for graduate students.

The recently formed Georgetown Alliance of Graduate Employees (GAGE) is working to establish an affiliation agreement with the American Federation of Teachers (AFT). This move is a continuation of efforts by Georgetown’s graduate students to organize, which began in April 2016 with a contested proposal to increase Ph.D. students’ hours.

GAGE intends to focus on salaries for graduate students that the university employs, which some members of GAGE believe are insufficient. “According to MIT, the current living wage in Washington, D.C. for one adult is 30,253 [dollars per year]; yet the vast majority of us receive only 27,000 a year,” Ben Feldman, a Ph.D. student in the history department, wrote in an email to the Voice. “A survey of the top graduate programs in the United States found no other stipends that were lower than the living wage for the city in which the university was located.”

GAGE also hopes to address what some graduate students see as shortcomings in the health care benefits offered. “Our healthcare is the same healthcare offered to Georgetown undergraduates, despite the fact that many of us are in our late twenties, thirties, and beyond, and have very different healthcare needs than students aged 18-22,” Feldman wrote. “A union will help us negotiate for a living wage, as well as access to dental, vision, and mental health care.”

Approximately 20 people gathered on Jan. 10 for GAGE’s first meeting. According to Deidre Nelms, a Ph.D. student in the philosophy department, graduate students attending the meeting discussed their opinions on unionization, the proposed structure of the union, and plans for affiliation.

The right for employees to unionize is acknowledged by the university’s Just Employment Policy, according to Nick Wertsch (COL ‘09, LAW ‘18), program coordinator at the Kalmanowitz Institute for Labor and the Working Poor. “Georgetown adopted its Just Employment Policy ten years ago, and this policy affirmed the university’s commitment to recognizing the right of workers to freely associate and organize,” he wrote in an email to the Voice. “These are fundamental rights for workers and for any community seeking to build a collective voice.”

Feldman wrote that although GAGE has not yet officially been in contact with the university, the organization hopes that the administration will be neutral towards their goal of unionization. “It is our expectation that Georgetown will continue its admirable history of remaining officially neutral during the coming campaign,” he wrote. Dean Norberto Grzywacz of the Graduate School of Arts and Sciences declined to comment.

The Aug. 23, 2016 NLRB ruling, which in part sparked this movement, asserted that graduate students working as research and teaching assistants at private institutions are legally considered to be employees and therefore have a federally protected right to unionize. This ruling reversed the board’s previous 2004 decision stating that graduate students are primarily students, not employees, of their university.

If GAGE becomes an affiliate of the AFT, it will join a small but growing number of graduate student unions on college campuses across the country. Graduate students at New York University (NYU) have been represented by a union since November 2013, when the university’s administration chose to recognize the union voluntarily. Graduate students also unionized at Columbia University in December 2016.

At Georgetown, the drive towards unionization developed through the Doctoral Students Coalition (DSC), an organization formed in November 2015 to advocate for issues concerning Ph.D. students. According to Feldman, one of the founding DSC members, the union working group within the DSC looked into the advantages of unionization, and concluded that unionization would help graduate students negotiate with the university regarding their salaries and benefits.

The DSC also provided a forum for communication among graduate students, which established some of the network behind GAGE. “We’ve already built up really strong relationships between the different departments,” Nelms wrote in an email to the Voice. “These relationships are largely the product of our time together building the Doctoral Students Coalition.”

The DSC’s working group’s decision came partially as a response to a dispute between doctoral students and the university administration in April 2016 over a proposed increase in number of hours the students would be required to work without a commensurate increase in pay. The proposed change faced opposition from graduate students, with the DSC circulating a petition against it. The change, originally set to take place for the 2016-2017 school year, was ultimately delayed for a year.

According to Feldman, a formalized union of graduate students would be a foundation for a more organized protest in similar situations. “Creating an institution with a clearly defined relationship to the university, and with clearly agreed upon rules for communication between the administration and graduate employees, is the only way to ensure that something of this nature does not happen again,” he wrote. “If any similar situation does arise, a union will ensure that it can be resolved swiftly, openly, and fairly.”

The DSC also conducted a survey immediately following a town hall event held on Nov. 2, 2016 at which the working group presented its recommendation to gauge graduate student interest in unionization. According to Nelms, the results were overwhelmingly in favor of unionization.

“GAGE is the result of widespread support of the graduate student body. 80% of graduate student employees who participated in a recent survey were either ‘somewhat’ or ‘strongly’ in favor of unionization,” she wrote.

Although GAGE grew out of the DSC, the two organizations are now unconnected and have distinct roles for graduate students at Georgetown. “The two groups now have separate leadership and goals,” Nelms wrote. “DSC is an advocacy and social group for Ph.D. students, whereas GAGE is actively pursuing affiliation and recognition as a union.”

GAGE plans to continue pursuing unionization in the future, as well as providing immediate support for graduate students. Feldman wrote, “We are continuing outreach to grad workers, continuing conversations about affiliation, and in the process of drafting a constitution.”