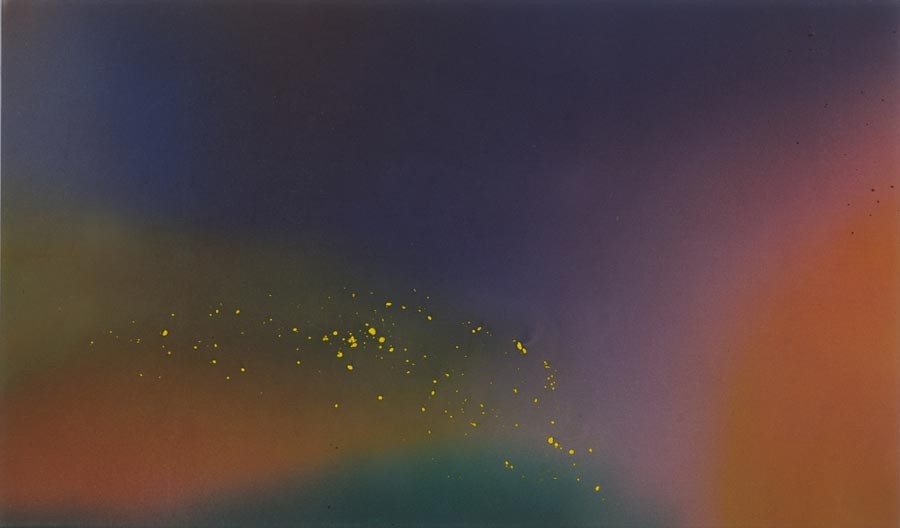 “I don’t like abstract art,” muttered one of my roommates dismissively after glancing at photos from the exhibition I had just visited. “I mean, yeah, it’s pretty, but it’s all just kind of the same to me.”

It’s easy to see why she said this. On the surface, Willem de Looper’s paintings, on display at the Hemphill Gallery, alongside a slew of other modern art, appear rather simplistic. Composed of vague, cloud-like smudges, there are few shapes or lines, and it’s pretty much just…color. And then it hits you: color.

de Looper’s method derives from a school of “color field painting,” an abstract approach in which the entire surface of the canvas is saturated with thin layers of paint. Influenced by European modernism and abstract impressionism, this technique became popularized in New York in the 1950s and 1960s. Unlike many other artistic styles, which emphasize the content of a picture, in de Looper’s paintings color itself becomes the subject.

There’s a fascinating contradiction in these works. Despite being drowned in paint—de Looper literally poured it onto some of the canvases—there’s a simultaneous sense of airiness and delicacy. Look carefully, and you can discern the fine layers, like a time-lapse photo of waves washing over the same strip of sand over and over again.

In Untitled, 1969, de Looper rotates the canvas forty-five degrees so that the painting resembles a diamond rather than a traditional square. The image has a curiously indistinct texture—it looks like a photo of wrinkled cloth, slightly out of focus. The colors are strongest at the edges, lightening and softening as the eye travels inward. Like many of the other paintings, there are no clear transitions between the hues—the canvas subtly shifts from green, to blue, to purple, to pink, and back to green again.

Another work, Intense Green, gives the immediate impression of fresh plant life with an intense green glow that seems to radiate outward from the middle. Around the edges, however, barely discernible flecks of black seem to be soaring inward, like tiny shooting stars.

His series of numbered, untitled paintings, 11-14, depart from the general style of the exhibit both in size and form. They comprise a series of smaller prints with harder lines, eliciting a more distinct impression.

Untitled 11 is particularly striking. Much like the now-infamous white/gold/blue/black dress recently popularized over social media, it’s the sort of image in which it’s possible to perceive an infinite number of colors and shapes. At first, I see a bright red Arizona desert with a tiny silhouette of a bird soaring over a pair of black, withered cacti, and blue mountains far in the distance. Blink and it becomes a massive cardinal, sweeping over a sea of flames. Blink again and it’s a human heart, pulsing against a midnight-blue, lightning-streaked sky.

In some ways, that’s the beauty of abstract art: you can see anything you want to see. When the art is formless to the point of total ambiguity, it forces the mind to engage with the image through imagination, revealing the viewer’s own inclinations and fantasies. By the very process of interpretation, we project our own thoughts and understandings onto the canvas. The art becomes a mirror into ourselves.

So maybe my roommate is right. Maybe the paintings are all the same to her. After all, if art represents a window to the world, perhaps it’s one where it is possible to look out and see everything—or see nothing at all.

On display until Mar. 10