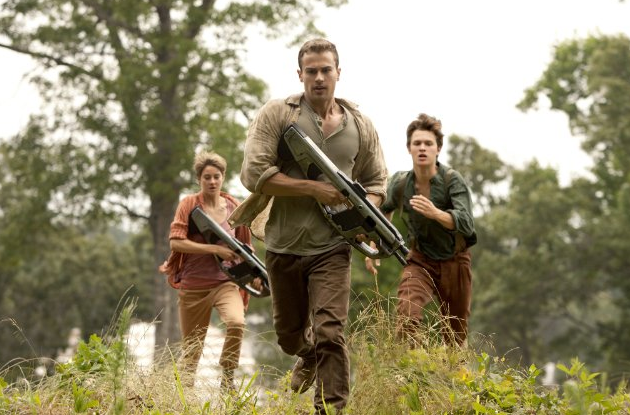 The second installment of the best-selling Divergent series continues in a thrilling—okay… well, let’s just say it continues.

Insurgent picks up where the last film left off, with the protagonist, Tris, played by Shailene Woodley, her brooding, hunky boyfriend Four (yes, hardly any of these people have normal names), her brother Caleb, and her sometimes-ally sometimes-enemy Peter, having narrowly escaped from the Dauntless headquarters. Now, they head for the Amity sector, basically an over-the-top, feel-good hippie commune.

After arriving safely in Amity, Tris and Four engage in some forced romantic dialogue, made all the more awkward by the fact that Caleb is played by Ansel Elgort (Woodley’s boyfriend in The Fault in Our Stars), and Peter is played by Miles Teller (Woodley’s boyfriend in The Spectacular Now). The re-casting of the same actors here feels vaguely incestuous—you’re trying to concentrate on Four (played by Theo James), but you can’t help but remember that Woodley has already made out with the other two.

Otherwise, for a series described as “the poor man’s Hunger Games,” this sequel certainly delivers. Tris, like Katniss, suffers from extreme guilt and angsty nightmares due to “Everyone I love dies!” syndrome. Tris, like Katniss, makes maddeningly irrational decisions (yeah, why not turn yourself in to the totalitarian government? They seem nice—I’m sure they won’t double cross you).

Most of all, Tris engages in exactly the sort of personality waffling that made Katniss so difficult to like.  From scene to scene, Tris shifts between moods so rapidly you begin to wonder if, in fact, the government was right in labeling her as an unstable hazard to the community. Is she a cold-blooded killer or a weepy teenage girl? Is she determined to seek revenge or the type to shrug off betrayal as no big deal? Throughout the movie, Woodley valiantly struggles to play a character that has too many—well, divergent—personality traits.

One of the more engaging aspects of the plot emerges in the chilling psychological ordeal that Tris endures. The combination of her freakish nightmares and the occasional “sim” (a virtual simulation that tests personality traits) creates a curiously unstable sense of reality—you’re never exactly sure if the scene you’re watching is actually happening.

This uncertainty creates some much-needed excitement, and lends itself well to plot twists and character development. It’s also horribly creepy watching the sim-subjects flail around in the air, dangling from ropes connected to their nervous system.

The action-packed simulations are in fact far more entertaining than the endless real-life fight scenes. Four, with his blazing guns and six-pack, saves the day so many times you begin to lose count and interest. Just as a situation looks completely hopeless, he swoops in with an all-too-timely rescue, the hundreds of armed guards in his way mysteriously evaporating.

I mean, you’re telling me these people have instantaneous brain scanners, but can’t keep one teenage boy out of the government headquarters?

Overall, Insurgent fails to impress—it’s now just one more mediocre film in an already-crowded dystopian genre. Tip for next time: lose the worn-out romance angle, scale down the predictable fight sequences, and at least choose a protagonist whose name doesn’t rhyme with Katniss.