Last week, I went to El Paso, Texas with twelve other Georgetown students on an Alternative Breaks trip. I left without any real expectations, except that it was something vaguely about immigration—an intractable, mysterious issue, which, like gun rights, abortion, and race, seemed to divide this country and have had no satisfactory solutions.

We stayed at Casa Vides, a shelter for migrants operated by an organization called Annunciation House. We reflected, we cooked, and we swept the floors, just like everybody else who lived there. Possessing no Spanish language skills, I couldn’t really talk with any of the guests. One, Rachel, a small, elderly woman, giggled whenever I tried, and failed, to recreate the rolling ‘r’ sound in Spanish. “Rrrapido,” she smiled as she saw me yelling at my friend who could not sweep the floors quick enough.

And, in the midst of this restless trip, I began to understand what immigration meant.

It used to be easier. More than forty years ago, my great-grandmother’s brothers decided to bring their children to San Francisco, sold newspapers, got engineering degrees, and married immigrant wives from Hong Kong or Macau. One of them struck gold by co-founding a data storage company.

Every year, thousands of Indonesian and Filipino mothers and young women move to Hong Kong to become live-in domestic servants for middle-class families. I belong to one of those families. From time to time, my mother gives used clothes, phones, and handbags to Normita, our housekeeper since 2005, who sends it back to her three children in the Philippines. Such was the act of migration: a human choice towards opportunity.

Somewhere along the timeline of our development as a species, however, migration became a story of struggle. An anathema to national security that allows the Obama administration to lock up mothers and babies in family detention centers.

In El Paso, you will find highway checkpoints staffed with well-armed Border Patrol agents ready to profile migrants and pick fights with anti-border militarization activists who question their legal authority. You will find border fences, motion sensors, and drones—ugly military-industrial scars that separate El Paso and Juárez, two cities that really are one unified community ripped apart in the name of imagined terrorist threats. Meanwhile, in Hong Kong, you will find a housewife sentenced to six years in prison, for shoving a vacuum cleaner rod into her Indonesian housekeeper’s mouth and twisting it, among other heinous acts of torture. There are many more exploitive Hongkongers like her.

Instead of a cherished mechanism for opportunity and happiness, migration has become a taboo subject, fraught with frustration and resentment. Sometimes, it’s the little things that make life so hard for migrants. After my phone broke in my first month at school, I almost led AT&T to think that I was committing identity theft because, as an international student, I had no Social Security Number and my phone bill was under someone else’s name. And even if getting a H-1B work visa is discouragingly difficult, my father reprimands me for not appreciating how hard he had worked to allow me to study overseas in the first place. “How well you know me? You don’t bother to talk to me for more than two minutes,” his words of pain treading on the deepest, darkest roots of my heart. I sobbed alone in the bathroom while I read that text message over and over again. Of course, my pathetic helplessness about my future after Georgetown is nothing compared to the abuses undocumented migrants suffer from, or the countless people who have died crossing the desert on the U.S.-Mexico Border.

When it was time to leave Casa Vides, I stood in the living room while everyone said their goodbyes in Spanish. A woman named Rachel sat in the corner, staring at me with the most intense gaze. I had hardly spoke to her or even got to know her because I couldn’t communicate in Spanish, but she gave me a firm, warm embrace. Her damp eyes looked into me, she gave me advice in Spanish, and I understood nothing.

But to her, that didn’t matter. For her, there was no “other,” no awkward tension with a foreigner from a strange place who could not speak her tongue. I think she knew migration is more than a concept toyed with by congressional Republicans as they hold funding for the Department of Homeland Security hostage. It’s not heckling at rallies that support Aramark’s workers on campus. It’s about celebrating the beauty of opportunity, of encountering difference, or people who you otherwise would never cross paths with.

“You will come back for me,” Rachel said in English, on the verge of tears, not letting go of my hands. “Rrrapido, rrrapido.” 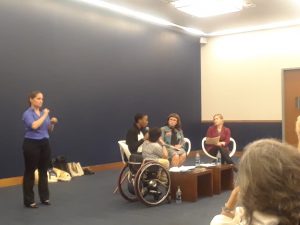