A powerful scene (and there are many) in Alfonso Cuarón’s Children of Men goes something like this. In 2027, a xenophobic and nationalist Britain regularly raids entire housing complexes in London, rounding up asylum seekers in cages. The police spot a car belonging to a resistance group. They see a dead woman sitting shotgun, blood spilling from her throat. 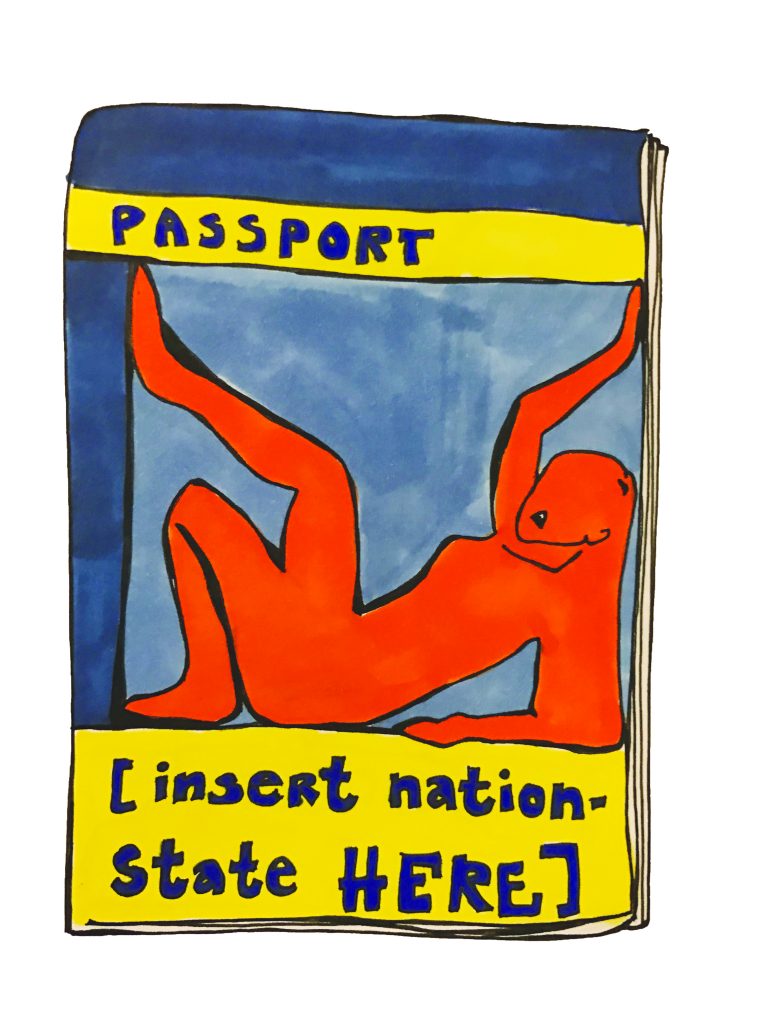 “Get your passports out!” someone screams, breaking the bloating air of dread. Pistols drawn and ready to murder, two policemen demand the driver take his hands off the wheel. Inside the car, the passengers, electrified by their impending deaths, wave dark, tiny, rectangular papers desperately in the faces of the police.

The proclamation is simple, but terrifying.

What do we talk about when we talk about each other? Perhaps personalities, occupations, hopes, dreams, or fears. But what about citizenship? Is it ever fair to distill the unending richness of a human biography into the little navy (or crimson, or burgundy, or olive) book we either obtain from the state through the lottery of birth, or earn through navigating a complex and fluid mass of immigration and citizenship laws?

A statement in my own passport harkens back to the medieval origins of this elusive document: “The Ministry of Foreign Affairs of the People’s Republic of China requests all civil and military authorities of foreign countries to allow the bearer of this passport to pass freely and afford assistance in case of need.” At some point in human history, the passport mutated from a mere travel document to the marker of one’s place in the global capitalist system—or, as in Children of Men, a reason why you should not be arbitrarily murdered by the police state.

A simple Google search already shows that there is a cornucopia of lifestyle websites, consulting firms, and even private membership clubs amongst Georgetown students that fetishize this idea of frictionless movement. With a wave of their little blue biometric books, and a swipe of their executive platinum credit cards, they get to appropriate the term “global nomad”—as if living precariously, which many refugees, stateless people, and undocumented families in this country do, is a privilege.

Passports condition us to accept borders in our society. If you ever enter the United States at an international airport, you will notice the Department of Homeland Security doesn’t actually operate any actual barriers to regulate the flow of people into the country. Instead, we patiently stand in line, sometimes for hours, until the next available immigration officer calls us forward. In that stuffy, sterile space, we subject ourselves to the mercy of that officer, who, until we finish performing the delicate rituals of border-crossing, is free to keep us in an inhuman limbo. Why are you entering the United States? Where do you study? Why are you studying international relations? Are you sure that you have the sufficient finances to complete your degree? Why can’t you speak English?

To those who fail at fulfilling those rituals to a satisfactory degree, borders provide an open license to strip all remaining humanity against those we fear and hate. Therefore, undocumented students are “illegal,” immigrant workers are “welfare parasites,” and Syrian refugees are “terrorists”—words that demand the state to raid schools, break up families, and derail careers all in the elusive name of national security. The Muslim ban and undocumented immigrant raids Trump and his white nationalist cronies concocted a few weeks ago precisely exemplify this. With a stroke of a pen, he empowered the state to force permanent residents to give up their green cards, handcuff children, search through the phones of NASA scientists, deport visiting grandmothers, and break up families in “target-rich communities,” in the words of an anonymous immigration officer quoted in The Washington Post. Do they think striking fear in schoolchildren is some sort of game?

Although politicians sympathetic to the idea of comprehensive immigration reform almost inevitably characterize the United States as “a nation of immigrants,” throughout history, this country has engaged in some of the most vile practices afforded to a state by national borders. While Ellis Island and the Statue of Liberty welcomed European immigrants in New York, Angel Island interrogated and detained thousands of Chinese, Japanese, Indian, and Filipino immigrants in San Francisco. And of course, in its early days, this country trafficked hundreds of thousands of human slaves from the African continent.

And yet, the destruction, hatred, and violence found at our borders have not deterred anyone from crossing them, because borders have also been an inherent source of hope. If Trump, and any of his supporters, are struggling to find a reason for why the United States is so “great,” they need not look any further than one of the hundreds of consulates around the world: the millions of people who brave the sweltering, hours-long lines to apply, as Sean Spicer correctly observes, for the “privilege” to enter the United States. These immigrants are the greatest endorsement any single country in the world could receive: an affirmation that the United States remains a land of opportunity.

From the privileges of my personal life, I cannot possibly claim to relate to the refugee, stateless, or undocumented students of my school, or anyone whose lives hang in the balance because of Trump’s Muslim ban or undocumented immigrant raids. But in our brave new world of resurgent nationalism, I simply and humbly hope that my passport does not determine the question of my own life and death.

Kenneth is a senior in the SFS.