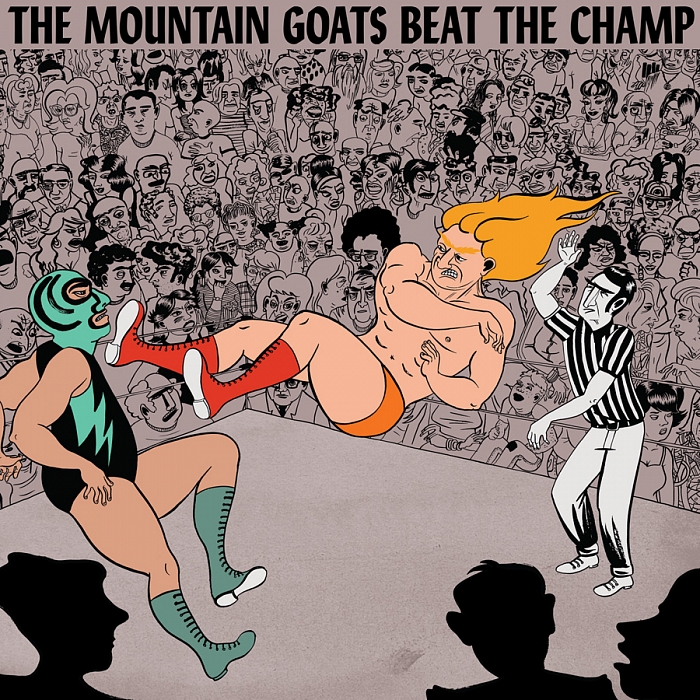 Metal and Satanism, blues and sadness, rap and da club—some music genres and subject matters just seem to go together. With their new album, Beat the Champ, the Mountain Goats attempt an unconventional combination of folk rock and professional wrestling.

Led by guitarist and vocalist John Darnielle, the Mountain Goats successfully use the storytelling format of folk to tell tales of masked warriors and folding-chair brawls. Songs like “Unmasked!” and “The Ballad of Bull Ramos” take these stories and add a deeper layer underneath, exploring concepts like death and solitude via analogies between these themes and the actions of the wrestling arena.

Given the subject of the album, the lyrics do sometimes wander into the absurd. During “Foreign Object” Darnielle sings, “I personally will stab you in the eye with a foreign object.” However, because of the pleasant nature of his voice, lines like this come across as fun and even comical in nature.

Musically, Beat the Champ oscillates between an acoustic guitar-centered folk rock and an indie rock sound with a more upbeat tempo and use of electric guitar. “The Legend of Chavo Guerrero,” one of the highlight songs of the album, has a strong indie rock vibe, while “Animal Mask” stands out among the folk songs. Occasional songs, like “Southwestern Territory,” have a calmer, piano-centered folk sound, giving the album a wide array of moods and tempos.

With this mixed bag of styles, there are bound to be a few miscues. “Hair Match” is a prime example, as it doesn’t offer much musically and drags on a bit too long. Additionally, Darnielle’s voice here sounds a bit off, a problem that pops up on a couple other songs as well.

These minor setbacks are more than worth the exchange for an interesting subject matter and varying musical styles that give the Mountain Goats their own niche in the indie folk genre. And who knows, Beat the Champ’s success may just start a trend that makes folk and wrestling as common a combination as country and pickup trucks.