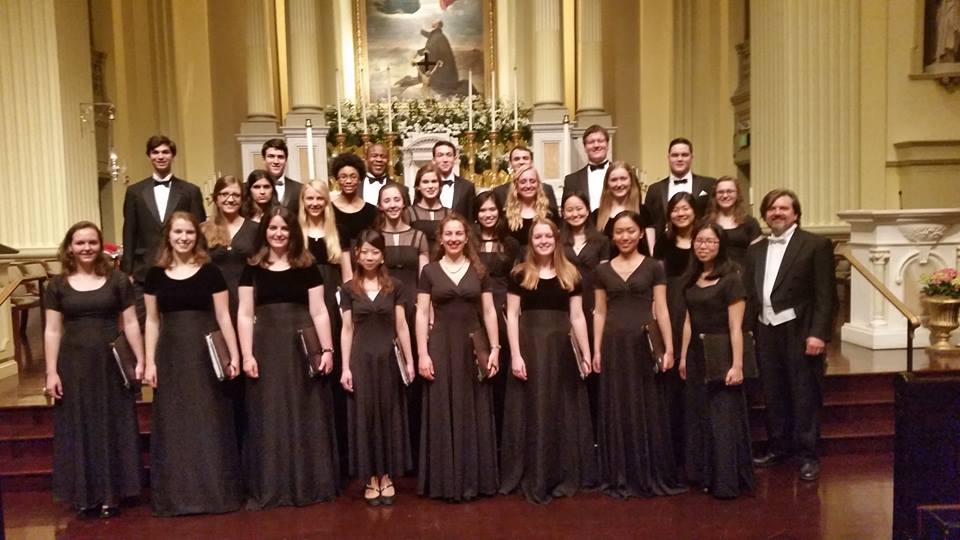 For many Georgetown students, McNeir Auditorium is a bit of an enigma. Aside from the occasional lecture or small performance, it’s a space that often sits empty during the day. On Monday and Wednesday evenings, however, the space fills with the sound of student voices as the Georgetown University Concert Choir gathers for their weekly rehearsals.

As members of Concert Choir, one of the three choral music groups sponsored by the Department of Performing Arts, students have the opportunity to hone their vocal technique. Under the tutelage of their director Frederick Binkholder, Visiting Assistant Professor of Music, the choir has had the opportunity to perform masterpieces from musical history in locations on and off campus, ranging from Gaston Hall to St. Ignatius of Loyola Church in Baltimore to the Verizon Center.

Students join the choir, which counts as a one-credit course, for many reasons.

“I think people join because they want to sing really good music. We sing Mozart. It doesn’t get much better than that,” baritone and President of the Concert Choir Anebi Adoga (COL ‘16) said. “Mozart, Brahms, Bach—we sing some of the most critically acclaimed music ever written.”

The singers have nothing but praise for Director Binkholder. “You have a director-instructor who really, really cares about bringing the best out of each individual person, so you end up sounding way better than you ever thought you could,” Adoga said.

Professor Binkholder’s students appreciate not only his musical instruction, but also the concern he shows them as individuals. He “always makes sure that we are feeling well as people and not just pupils,” alto Rosa Cuppari (SFS ‘17) said.

Additionally, Professor Binkholder stresses the importance of art as part of being a well-rounded person. “What I want to give them is the space to allow art to be in their lives, because I think that that’s a perpetual goal, not just a collegiate idea, I want it to be a lifelong goal,” he said.

The director has many goals for the choir. “I’ve tried to take it back it back to its original thought of doing major works,” he said. According to Binkholder, one of strengths of a program like the choir is that it allows students to not only see grand works of art and to look at them from an intellectual sense, but to also get a chance to perform them.

During their final concert of the semester on Sunday, the Choir plans to perform Mozart’s Requiem Mass in D Minor in Dahlgren Chapel—a complex and ornate piece the famous composer never finished due to his untimely death. A requiem is a funeral mass, and the challenge in performing Mozart’s piece lies not in the work itself, which is relatively straightforward for the voice, but rather in capturing the intense emotion of such a heavy work. Such a challenging piece is only done through a group effort. “You could never imagine doing this work on your own. It was a group effort, and it enabled you to be involved in the creation of a masterpiece, which was wonderful,” Hu said.

Every year, in addition to concerts that feature bigger musical works, the choir performs Christmas carols at the Georgetown Lombardi Comprehensive Cancer Center during the holiday season. Last December, the group held its fourth annual charity concert for the Lombardi Center which raised about $500 for cancer research.

Adoga reflected on the experience of singing at Lombardi. “What was really touching was in the beginning when we could see some people who were there waiting starting to sing along. Family members, some patients too, singing along with us,” he said. “It was really emotionally heavy, very inspiring as well. Heartbreaking, but kind of in a good way, that we were able to help these people find joy in these difficult situations.”

Moving forward, Professor Binkholder hopes to make further integrate service into the choir’s schedule. “[It gives] the students a chance to latch onto something greater than themselves, and I think that seeing that would be a really nice goal for the ensemble. We do it a little bit, but I would like to make it a structural part,” he said.

When asked about his favorite part of being director, Professor Binkholder smiled. “I love the absolute brilliance of my students,” he said. “They keep me on my toes … it keeps me young.”