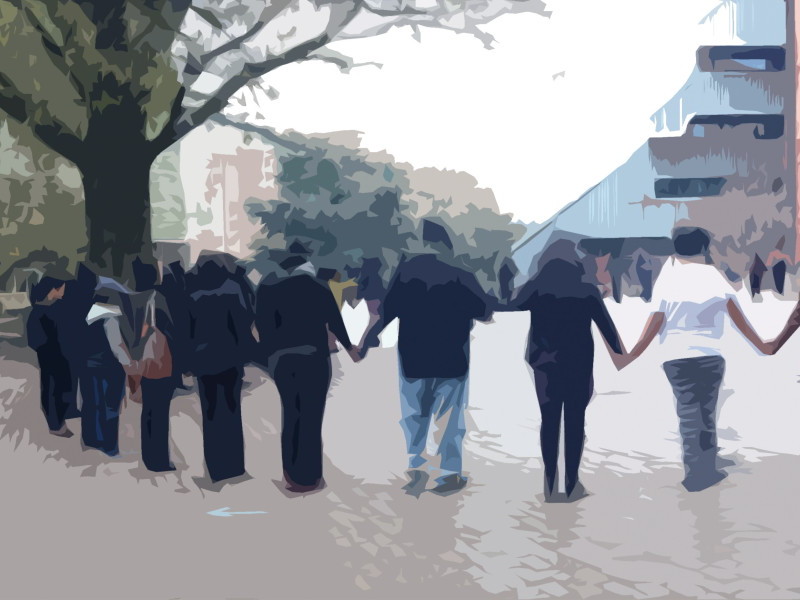 A group of over 50 students gathered for a sit-in outside of university President John J. DeGioia’s office on April 10 to present a petition expressing support for the “Engaging Differences/Diversity” curriculum change proposal.

The “Engaging Differences/Diversity” proposal would require all students to take courses that relate to issues of diversity. The Last Campaign for Academic Reform, a student group that worked with the Provost’s Committee on Diversity to develop the proposal, unveiled the petition in the wake of a Page Thirteen cartoon in The Georgetown Voice, which many felt reflected a culture of unconscious bias on campus.

Although students have shown support for the requirement up to this point, the proposal still must be approved by at least three groups and two individuals. There has been some student confusion over when exactly the Main Campus Executive Faculty will vote on the issue. At the town hall meeting in response to the Page Thirteen cartoon in February, representatives for The Last Campaign for Academic Reform said the faculty would vote on the issue in March. They have since amended the date to be the next meeting of the MCEF, April 24th.

Though the MCEF has been the most mentioned faculty group in the discussion, other players also have a role in the proposal’s approval and implementation. The MCEF cannot actually vote on “Engaging Differences/Diversity” until the Core Curriculum Committee has approved the proposal, according to Professor Ian Gale, chair of the MCEF. The fifteen-member CCC, created spring 2010 in a joint effort between the MCEF and the Provost’s Office, is a standing body whose purview is the core requirements that affect the university’s undergraduate program. Its members represent all four schools. English professor and Vice Provost for Education Randall Bass and Chair of the Theology Department, Rev. Christopher W. Steck, S.J. co-chair the committee.

According to Bass, the CCC would ideally meet once every month of the academic year, but has met more frequently this spring due to the “the urgency of the ‘Engaging [Differences/]Diversity’ proposal.” Gale noted that his group was also working to accelerate the proposal. “The Main Campus Executive Faculty, which is operating in parallel [with the CCC] to expedite the process, has discussed two versions of the proposal this year,” he said.

Bass said that the CCC has continued revising the proposal because of the important impact all curriculum changes have on the campus. He explained that the proposal has been evolving for several reasons, namely, “to find the right language to balance meaningfulness with flexibility; to frame the learning goals so that they can communicate intent to a wide range of disciplines across the campus; [and] to frame the implementation in ways that meet the concerns of all stakeholders.”

The committee is concerned not only with approving the proposal, but also with ensuring that it can work practically, according to Bass. “The CCC is an important proxy for the campus, and its careful consideration of the proposal ensures successful implementation, not just approval,” he said. Bass also explained that this lengthy process is normal for such an impactful proposal. “All curriculum proposals undergo continuous revision and evolution,” he said. “With a substantive change to the Core Curriculum, especially on a topic like ‘engaging diversity,’ this is especially the case.”

After moving through the CCC, the proposal will go to a vote in the MCEF. According to Gale, “Once the MCEF has approved the proposal, it must still go to Provost Groves, President DeGioia, and the Board of Directors for final approval.” Bass anticipates that if the MCEF affirms the proposal this spring, final approval from the Board would be in place by June. It would first apply to the Class of 2020.