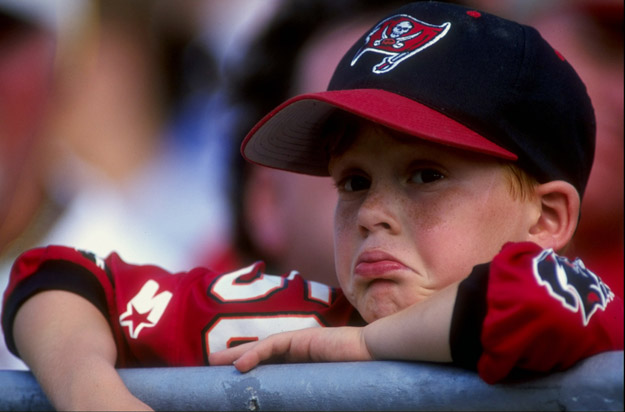 Sewn into the fiber of sports fandom is an ever-present optimism which prescribes that, as bad as the fate of one’s team may be through the course of one season, the next will be a different story. Touched by the veneer of offseason delusion, fans expect that all acquisitions will pay off, all players will improve during training camp, all weaknesses have been addressed, and that the team is generally headed in the right direction.  This can trick a fan into believing that the second-string guard they brought in will be just what the doctor ordered to get his or her team over the proverbial hump.

For some fanbases, however, this optimism is held in equal measure with a sense of impending doom, knowing that it is not a question of if, but when, the team will implode. As a fan of the Tampa Bay Buccaneers, my hopes were dashed ahead of schedule this season. My “here we go again” moment came a mere seven minutes into the first quarter of our first game against the Tennessee Titans, at which point the Titans were already leading 21-0. That familiar embrace of failure only heightened throughout the game, as Tennessee steamrolled their way to a 42-14 victory.

This was essentially the worst possible start for the Bucs, utterly dominated on both sides of the ball by a team that went 2-14 a season prior. The team was unable to manage any semblance of offense and our defense got carved up by rookie quarterback Marcus Mariota, who seemed to coast to a quarterback rating of 158.3, a statistical “perfect game.”

From this point on, I, like fans of several other franchises with similar histories of recent horridness, namely Cleveland, Oakland, Washington, and Jacksonville, will look to each coming game with a sense of dread, from which the only respite will be the two to five wins we manage to pull off against similarly poor teams.  I can only liken the sensation of being a Bucs fan in recent years to the dismay one feels leading up to an extended period in Lau, knowing that soon, you will endure suffering for hours on end, leaving you defeated, distraught and emotionally exhausted.

I had plenty of reasons to be optimistic about the 2015 campaign. The fanbase has been abuzz due to our first overall pick and film room darling quarterback, Jameis Winston. Winston was primed to lead an explosive attack, bolstered by young star wideout Mike Evans and hard-charging running back, Doug Martin, who was finally healthy for the first time since his Pro Bowl rookie season. Additionally, new offensive coordinator Dirk Koetter, formerly of the Falcons, was expected to revitalize an offense which was abysmal a season ago.

On defense, I hoped that defensive tackle Gerald McCoy and linebacker Lavonte David, two of the league’s premier defensive players, would anchor the unit.  The defensive side of the ball was strengthened by acquisitions in the defensive line and secondary, as well as the drafting of middle linebacker Kwon Alexander, who many expect to quarterback a defense which often looked lost last season. This is a lofty expectation to pin on a rookie fourth round pick. Most importantly, our head coach, Lovie Smith, is known as a defensive guru and was set to improve the defense dramatically, after a year of implementing his system.

Yet, on Sunday, none of these acquisitions seemed to make any difference. The pass rush was nonexistent, the offensive line was porous, the secondary gave Mariota easy reads the entire game, Winston seemed rattled, careless, and unprepared for the spotlight, and the team as a whole seemed uninspired. Other than Winston hopefully adjusting to the NFL as the season progresses, there are essentially zero reasons for fans to expect their team to improve.

If it seems like I may be grossly overreacting to the season’s first game, I am. But I am also quite certain that this team is no different than the last several Buccaneer teams, which were all plagued by similar issues and have convinced fans to expect poor performance unless given a reason not to. For Bucs fans, as for fans of our compatriots in woe, it appears we’re headed for a long season.

The Penultimatum: Two Weeks to Go