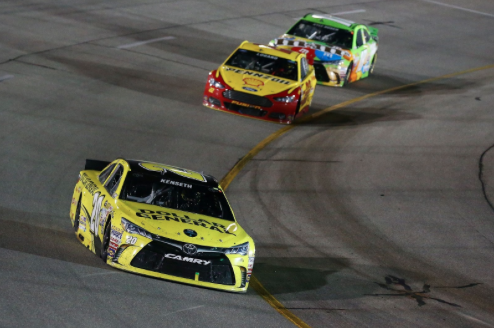 I traveled to Richmond on Saturday night to watch a NASCAR race in person for the first time. The Federated Auto Parts 400, to be exact. Going in with no expectations other than a nagging fear for my safety–brought about by a mix of cars that go really fast and people that like cars that go really fast–left me curious and excited at every turn.

The first thing that struck me when I arrived was the sheer size of the speedway, which is moderate compared to places like Daytona and Talladega but still capable of holding roughly 70,000 screaming fans. The second thing that struck me was Bojangles. Having seen hundreds of commercials for the fast-food chain in my life, the chance to indulge in the tantalizingly mediocre chicken fingers was thrilling.

All kidding aside, for now, the beginning of a NASCAR race makes for a surreal experience. There’s the anthem and the flyover and the fervor typical of any major sporting event, but there’s also the communal prayer and the several precoital pace car-led laps before the race truly begins. By the time the pace car’s lights shut off, the crowd is worked up beyond belief. My NASCAR-loving friends began preparing me for what they insisted would be jaw-dropping moments in the race’s early stages.

The first lap provides a moderate “wow” as the cars begin to pick up speed, but the second lap blows one’s proverbial mind. I have watched only bits and pieces of races on television, but suffice to say that watching from the comfort of one’s couch prevents full appreciation of the wild spectacle as seen from behind the frighteningly destructible fence surrounding the track. For one thing, the NOISE. Imagine the loudest acceleration you have ever heard, multiply it by one thousand, and then keep in mind that this noise repeats itself 40 times (one for each car) for 400 laps. Earplugs eventually become necessary, even for the Santa-bearded die-hard fan beside me; he had clearly seen his fair share of NASCAR races, given his well-loved Jeff Gordon hat, faded Dale Earnhardt shirt, and sun-dried complexion.

For a second thing, the SPEED. We all know that these cars go fast in principle, but witnessing their reckless ricocheting in person instills all new levels of appreciation for the surely crazed individuals behind their wheels. I was certain that each driver would hurtle fatally into the fence as they made their first full-speed turns, yet they moved with a graceful precision. I am afraid I could not match at a tenth their speed, smoothly drifting away from the fence as the track rounds out.

After shocking myself with my own enamorment, the cultural backdrop of the race brought me back to reality. There are plenty of stereotypes out there about NASCAR fans, ranging from the Confederate flag-wielding redneck to the beer-guzzling lifer, and many of them do seem to hold some truth. The expansive parking lot had its share of Confederate flags, and the crowd consumes beer at an expeditious pace. There are plenty of grungy beards, sleeveless shirts, protruding guts, and outfits for which the only explanations can be lost bets.

Nonetheless, there are also plenty of happy couples, longtime pals, and excited children. I wondered for years why people would subject themselves to hours of this monotony, but really it’s the same as any spectating experience. Whether it’s Matt Kenseth closing out a race or Bryce Harper sending a baseball into orbit, we watch because we want an escape, and in that escape we want to watch people accomplish and achieve in ways we never will:with their strength, their skill, their ability to not die despite driving well over 100 miles per hour for over three hours.

That being said, some lady brought her dog, rendering profound thought impossible. The poor creature curled up in her arms, looking up as if to say, “Do you know how sensitive my ears are? HUMANS have to wear earplugs for this shit, and I am a dog, remember?” This was the first time I had ever hoped for an animal to be deaf, but based on the pooch’s startled reactions to every revved engine, my hopes were dashed. One can only hope the people who brought babies to the race also brought industrial-strength earplugs.

I will still not watch NASCAR on television if I can help it, and I do not know if I will ever go to another race (Peeing at a crowded trough will never be my thing, I think.). But I most certainly do not regret the adventure. Stepping hundreds of miles and seemingly many worlds outside my comfort zone was strange but revealing. The loudest place I have ever been was also one of the most peaceful, as the rhythm of the cars that at first brought the crowd to its feet eventually relaxed them with its stress-free indulgement.

After what felt like a days-long waking dream, I cleared my eyes of rubber particles, removed my earplugs, and looked up to the obelisk of a jumbotron at the track’s center. It read, “100 LAPS REMAINING.” The man beside me, adorned with Dale and Jeff, stood and cheered once more. 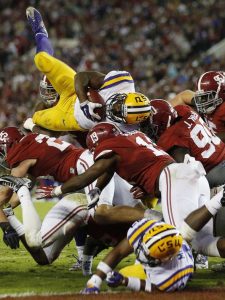