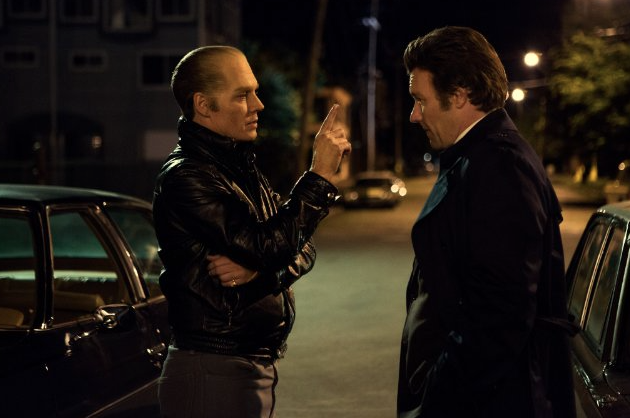 What makes a monster, and what brings him down?

Black Mass director Scott Cooper (Out of the Furnace, Crazy Heart) explores these questions through Boston crime lord James “Whitey” Bulger. Based on Dick Lehr and Gerard O’Neill’s book of the same name, the film follows Bulger as he rises from small-time bully to become the most powerful criminal (and perhaps person) in Boston. Cooper paints a dark picture of the city and an even darker one of its psychopathic son, a man thirsty for absolute power and sustained by absolute loyalty.

At the grim center of the movie lies Bulger, played by Johnny Depp with dead blue eyes and a haunting aura. This is certainly his most compelling performance in several years, if not his greatest ever. Every smirk and stare is tinged with the same malice as the murders and shakedowns. The killings and showdowns are certainly memorable, but Depp’s best moments come at dinner tables and in quiet apartments. He keeps everyone on edge, constantly calculating whether or not his friends and allies can be trusted, and always disposing of those who end up on the wrong side of the math.

As a man obsessed with loyalty, Bulger relied heavily on those around him, and Depp’s castmates bolster the narrative. Jesse Plemons (who played Todd on Breaking Bad) starts the movie off with a fistfight as henchman Kevin Weeks and never stops swinging, sitting in awe by Whitey’s side for much of the saga, doing the gangster’s increasingly dirty work. Benedict Cumberbatch plays Billy Bulger, who served as President of the Massachusetts Senate for the bulk of his brother’s reign of terror. Cumberbatch seems poised for a big scene several times, but the narrative never allows Billy to truly stand out. Instead, he mainly smiles and carries on, aware, but never involved in his brother’s wrongdoings.

The true supporting star is Joel Edgerton, the underrated Australian actor who did similarly superb work in The Great Gatsby and Warrior. Here he plays John Connolly, a childhood neighbor of the Bulgers who becomes Whitey’s FBI ally. Edgerton plays Connolly as awestruck and conniving, with the gap between his South Boston loyalty and moral code growing wider and wider as Whitey builds his urban empire. Connolly seems likable at first, but his undying commitment to his childhood hero turns him into a monster in his own right, the type that looks on and says nothing.

The easiest comparison for the film is The Departed, Martin Scorsese’s 2006 Oscar winner. Jack Nicholson and Matt Damon played incarnations of Bulger and Connolly, and the film had plenty of its own killing and corruption. Nevertheless, Black Mass is an entirely different movie in almost every other regard. Whereas The Departed’s violence and gore borders on the absurd and carnivalesque, Black Mass’ gore feels real. Nicholson’s Frank Costello was creepy and cruel but also ridiculous. Depp’s Bulger is horrifying, the effect only heightened by the truth of the account. Black Mass is a biopic; The Departed is a gangster movie. The former has the fast talk and tense action scenes of the latter, but it lacks the “fun” of Scorsese’s intertwining tale. The Departed ends with murderous chaos. Black Mass ends in the real world, in courtrooms and hideouts and penitentiaries.

Black Mass does have its shortcomings, but many of these seem to result from real-life circumstances rather than directorial oversight or something of that nature. The female characters, for example, do little more than cower in Whitey’s presence, not because of Cooper’s error but instead because of the real man’s effect on people. This speaks to a larger truth about the movie and Bulger’s story: no one really knows the man. To get inside the mind of a psychopath is a difficult task. Various characters testify about Whitey throughout the movie, about his actions and indiscretions, but only Whitey knows the whole story. He preaches loyalty and brotherhood, but he always has something else going on.

One could argue a similar pattern exists in all gangster stories, in everything from Goodfellas to The Untouchables and beyond. We hear traits associated with the evil men, patterns of maniacal behavior, but we will never comprehend their motives, their causes of being. We watch Whitey because his life and actions have been unbelievable, in the truest sense, and unfathomable, in the darkest ways possible.