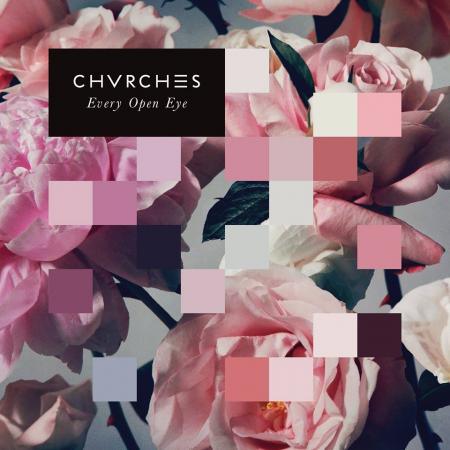 Scottish trio CHVRCHES has dedicated the foreseeable future to a long period of touring (and a pleasant visit to DC for the first ever Landmark Music Festival). This is following the release of their sophomore album, Every Open Eye. The album has been long awaited, as singles from the album were released gradually throughout this past summer. This electronic group makes the most of their synthesizers, ranging from bubbly synth-pop to darker, deeper tracks that rival the brooding attitude of 80’s new wave in their previous releases. Although maintaining some of these principal qualities, CHVRCHES falls short of expectations with a series of middle-of-the-road synth tracks that seem to meld together into a clumsy pool of spritely keyboard and soft bass. Granted, the album does have some mildly entertaining tracks, but it cannot escape the shadow of their first studio album, The Bones of What You Believe.

Sadly, this second album feels passionless and generic. The fun, 80’s influence seems gone as the band focuses too intently on the wrong aspects of what has made their music successful in the past. The first two tracks off of the LP, “Never Ending Circles” and “Leave a Trace” fail to utilizethe wild and colorful synth previously seen in exchange for extremely basic backing music solely used follow in lockstep around lead singer Lauren Mayberry’s vocals. Mayberry is by no means a terrible singer, but the strength of the band does not lie in her voice. She constantly clings to an attempt at a bold, belting style that makes each track sound the same. The words of each track are heard in an oddly crisp fashion that reveals lyrics that read like cheap poetry. Mayberry’s singing  should not receive the entire blame as far as vocal performance goes; Martin Doherty has adopted an awkwardly traditional singing style as well on his lead-vocal track, “High Enough to Carry You Over.” The song feels like a repetitive loop stuck somewhere in the back of a Daft Punk album.

There are a few diamonds among the rough of this work. CHVRCHES has their best success when they are willing to generate eerie, morose music. “Down Side of Me” begins with a deep bass and one simple synth rise that mellows and suddenly stops to transition into a pleasant harmony. Although not as successfully, “Playing Dead” follows suit with these ideals. The album definitely gives off more of an easy-listening vibe than previous work, but CHVRCHES must commit to that style in order to make good music. Many of the tracks try to begin dark and brooding, but then transition awkwardly out into half-committal dance music with an uncomfortably positive message.

Gentle and passive are the best adjectives for the tone of Every Open Eye. Yes, the band has been dark and strange at times, but that is what made them good. This entire new album feels like an attempt by the band to drag themselves down into mass appeal pop genre with just enough synth around to still be considered electronic-music. Perhaps it would have paid for the band to wait before working on this sequel; the band began work only six weeks after finishing their Bones of What You Believe tour. Not every album can be a masterpiece, and the band had a great deal of almost unfair expectations coming into this creation.  As long as the band avoids mainstream conformity, I suspect great things in the future from them.

Voice Choices: Clearest Blue, Down Side of Me