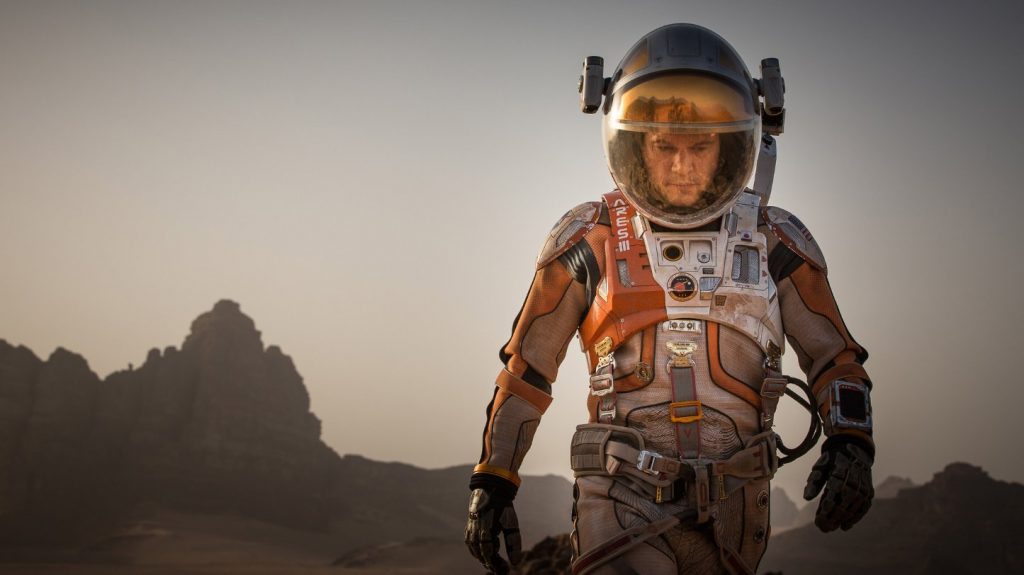 Ridley Scott’s relationship with the science-fiction genre has been inconsistent, to say the least. Alien and Blade Runner are two bona-fide classics, but the much more recent Prometheus was poorly received. Now, Scott returns to the genre with The Martian, a film based on Andy Weir’s best-selling novel. Fortunately, the film’s A-list cast and crew do not disappoint, as The Martian is one of the most gripping and involving films of the year. It balances a hefty amount of scientific accuracy with a sense of humor and unexpected moments of tenderness and emotion, making viewers dream about the promise of space exploration in a way that few movies can.

The premise of the film is refreshingly simplistic: Mark Watney (Matt Damon) is marooned on Mars after a massive storm forces his team to evacuate, presuming Watney is either lost or dead. He must figure out how to survive with limited food, oxygen, and an inability to contact NASA for rescue. Watney spends much of the movie alone, with nothing but a morbid sense of humor and a video journal to keep him company. As the film progresses, Watney grows increasingly resilient and refuses the temptation for self-pity; his resourcefulness and ingenuity make it easy for viewers to continue cheering for him as he encounters bad break after bad break. Should the role have been given to a lesser actor, Watney’s sarcasm could have been grating. Yet through Damon, Watney is not only relatable but almost loveable, and it’s clear that Damon has given one of the best performances of his career.

The rest of the cast is equally stellar. Jessica Chastain does an excellent job of portraying the guilty commander who was forced to leave Watney for dead, and her arc allows for great redemptive moments. Jeff Daniels, who plays the director of NASA, takes great care to balance a character that could have easily become a caricature. His role could have been reduced to a cliché-ridden political figure, but Daniels expertly humanizes a character with very understandable motivations. Kristen Wiig, Sean Bean, and Chiwetel Ejiofor all play their parts well, but Donald Glover is a stand-out, stealing the show as a slightly-unhinged scientist who provides a daring plan for Watney’s rescue.

Ridley Scott’s real triumph, though, is his grounding of the film. The scientific accuracy is undeniably impressive, but the film is smart to take inspiration from canonical space movies like Apollo 13.  The screenplay, written by Drew Goddard, does not get too bogged down in scientific jargon, and maintains a smart enough sense of humor to avoid becoming dull. There’s no human antagonist in the film, and the stakes, for once, are low. The film may not have the scope or sense of grandeur of recent space films, such as Interstellar, but it does boast an impressive emotional core anchored by a very fallible protagonist. The twists and turns the story takes aren’t anything earth-shattering (or Mars-shattering, for that matter), but they work in the scope of the story.

There’s a human element—the idea of an entire team of astronauts and scientists banding together to save one man—that pervades the entire film. There’s nary a conflict between characters, as everyone is consistently on the same side and working towards the same goal. Scott uses wide-shots of the desolate landscapes of Mars quite sparingly, choosing instead to focus on close-ups and point-of-view shots to keep the viewer tied to Watney’s immediate environment. There aren’t many set-pieces, but the film’s sense of humor (a running joke about disco music and a Lord of the Rings reference are two highlights) and strong performances help keep the viewer involved during the lulls between whatever crises Watney must face. Yet when the set-pieces come, they provide nail-biting tension.

Although the ending of the film may seem rather obvious, what makes The Martian unique is its unapologetically uplifting tone. One cannot help but beam as NASA works to bring Watney home. The unabashed optimism will cause the viewer to harken back to a child-like sense of wonder, as Scott taps into dreams of space travel and discovery to which any audience member can relate. The film is so well made that it is almost impossible not to enjoy the proceedings. The Martian may not take you to another world, but it will make you appreciate this one much more.

Arsenal: The Beautiful, Crazy Girl Next Door
Meet Vera Stark—You’ll Be Glad You Did