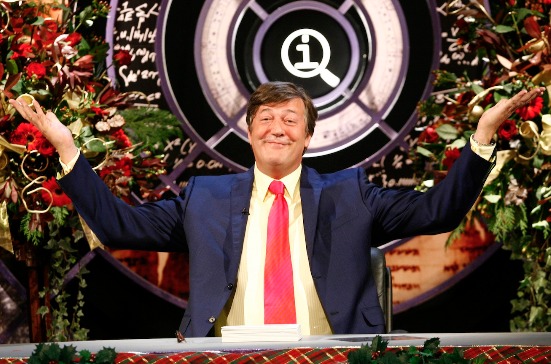 A garishly dressed Stephen Fry sits sandwiched between panelists, asking the simple question, “How many moons does the Earth have?” Alan Davies presses his buzzer, and it releases the sound of a chicken cluck across the stage. “One,” he declares with nonchalance. Suddenly, a booming klaxon declares Davies’s wrongness, and a large “ONE” appears on the screens in the background as the audience erupts in laughter.

Moments like these are common on QI, a British comedy quiz show that’s name stands for “Quite Interesting.” The show features host Fry and permanent panelist Davies, with three other guest panelists that change with each episode. The visiting panel sees frequent appearances by the likes of David Mitchell, Jeremy Clarkson, and plenty of other hilarious comedians. Unlike the traditional quiz show, QI asks absurdly difficult questions and derives humor from the panelists’ wrong answers, many of which are intentionally jokes.

Other factors bring added humor to the show’s simple concept. Fry’s constant ridicule of Davies is beyond entertaining, with the latter frequently serving up the silliest and most outrageous answers. The mysterious scoring system is another comedic staple. Supposedly, points are awarded for answers that are clever or interesting, even if they’re not right. However, more often than not panelists will end up with negative points, with Davies holding the record lowest score at -144. The almost arbitrary way in which one of the panelists wins the show adds yet another facet of humor.

What is really so remarkable about QI is how well the show flows. Rather than just sit dumbfounded or spurt out answers at nearly impossible questions, the panelists are able to snap into hilarious rants and anecdotes that are related enough to the question to keep up a sense of continuity. A question about German legwear spurred Rob Brydon into a tale about his recent fascination with long socks. The comedian even threw his foot up on the table and pulled up his pant leg to show the audience his new stylistic trend.

Even the rare moments on the show that lack humor still garner attention with the “quite interesting” facts that Fry reads out. These range from the technically correct, such as various statements claiming that the Earth has anywhere between zero and infinite moons, to more standard trivia knowledge like the fact that feeding a wounded bee honey can help it heal.

The 13th season of the show is set to premiere on Friday, October 16th. While it will not be available to watch in the U.S., the good news is that most episodes from the previous twelve seasons are available on YouTube. So whether you’re a Jeopardy fan looking for a laugh, or a comedy fan looking to learn a little on the side, QI provides the perfect blend of jokes and knowledge, and the results are beyond entertaining.