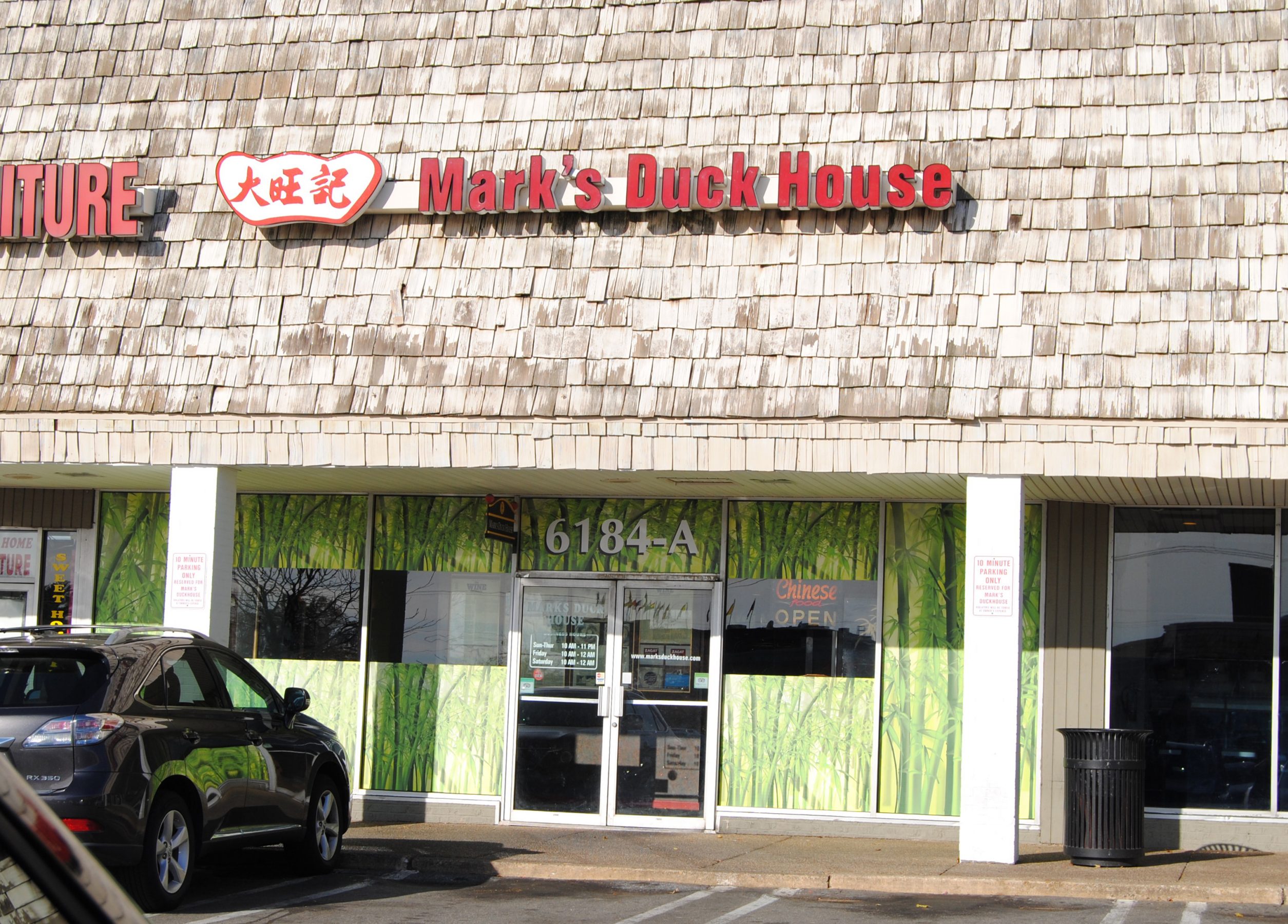 There’s escaping the Georgetown bubble, and then there’s going to Mark’s Duck House. For those of you who really, REALLY need to leave our polished college town behind, have I got the place for you.

Just an hour bus ride away, Mark’s Duck House is located in Falls Church, Virginia, and is glamorously wedged in between the chic Sweet Home Furniture store and La Panaderia de Paris. Mark’s will be a sight for world-weary eyes by the time you actually arrive. Once you push open the doors, you are whisked immediately to a table in the back.

The ten or so staff milling about with dim sum carts eye you anxiously, and a waitress (who is more akin to an overseer) sets down forks next to the chopsticks. “Just in case,” she says, even after my attempts to reassure her as to my chopstick competence. Her no-nonsense attitude seems right at home in decor that can only be described as typical Chinese banquet hall: green, vinyl-cushioned chairs from the 1980s, large, circular tables in the center, and lacquered coromandel screens. It’s all here, and while Mark’s isn’t particularly elegant or lavish, it gets the job done.

For those of you who are uninitiated, dim sum is basically the Cantonese version of tapas. Originating in the Southeast of China, this is the typical family brunch equivalent for the locals of cities like Hong Kong. You order many small plates of food to share, which you typically pick off of a cart that circles throughout the room with steaming, hot food. The carts are essential to the experience: carts can have a distinctive personality of dishes, whether they are sweet dumplings, savory dumplings divided by meat and fish. 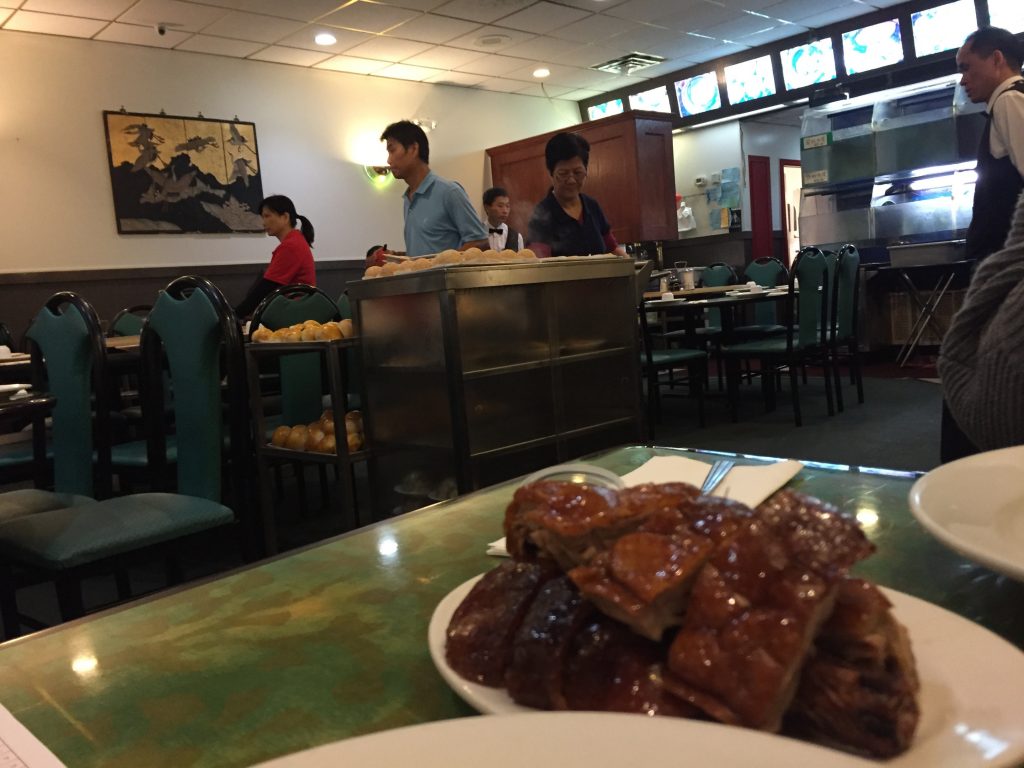 Once you place your first order, the feeding frenzy begins. We ordered duck and green tea just in time for the first invasion of the battalion of savory dim sum carts. As seasoned dim sum-goers, my companion and I were READY for what was coming. I imagine, though, that if you were not familiar with the process of dim sum, it would be totally overwhelming.

The duck came out before we even got a chance to begin picking dishes off of the carts that circled like buzzards through the restaurant, leaving behind a jetstream of pork-scented happiness. The duck was well-cooked, fatty and coated in sauce. At around $7, it was the most expensive menu item we ordered. 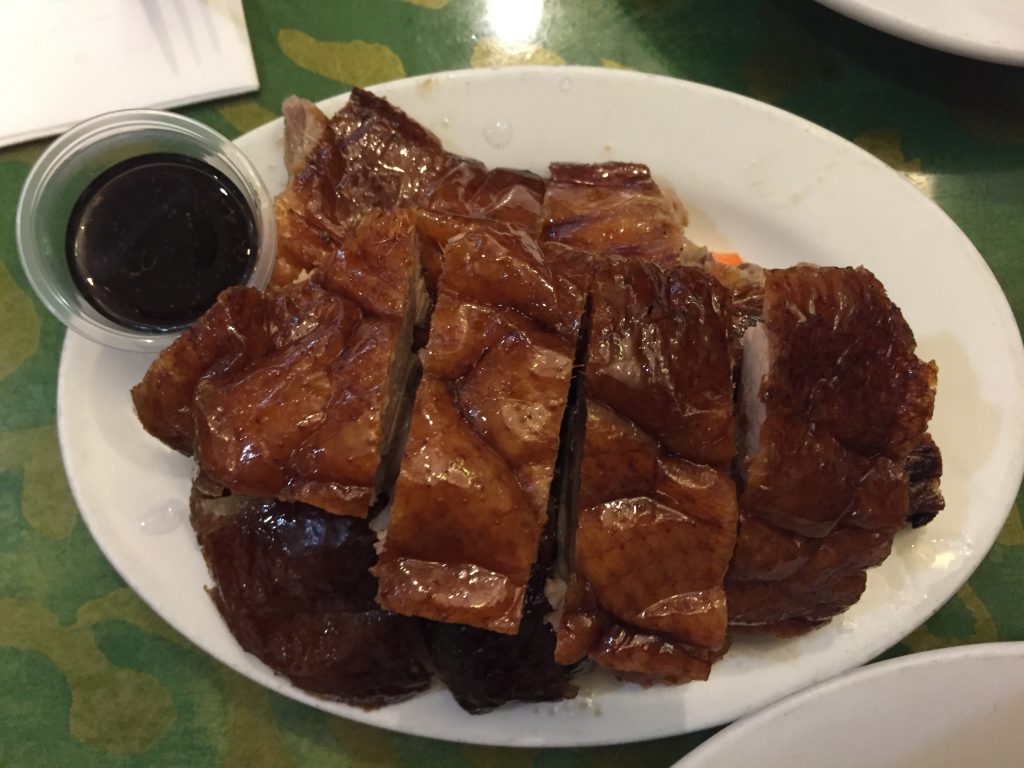 The seven-dollar duck was delicious and thickly-coated in sauce. Tim Annick/The Georgetown Voice

We entered the dumpling phase of our meal with har gau, steamed shrimp dumplings that have a chewy translucent dough surrounding simple, cooked shrimp. These dumplings were good, but I prefered their companion, a dish we selected from the cart. The dumplings were a sort of jiu cai with shrimp, which is a pan-fried dumpling with a thin crust,  stuffed with fish and vegetables. It was delicious, but we had almost no time to ponder the jiu cai because another cart rolled by and the siu mai distracted us. Siu mai is an open-topped, steamed pork dumpling, and here it was delicious. Both fatty and flavorful, they are a dim sum mainstay and are therefore not indicative of a restaurant’s unique dim sum skill.

Then, my favorite bun came: cha siu bao, or steamed, yeasted barbeque pork buns. The cha siu bao buns were fantastic, as they were both savory and sweet. Honestly, if you were to try one thing at dim sum, it would be these. They vary very little from restaurant to restaurant because they are such a mainstay of dim sum culture, but Mark’s Duck House’s traditional take on them was flawlessly executed. 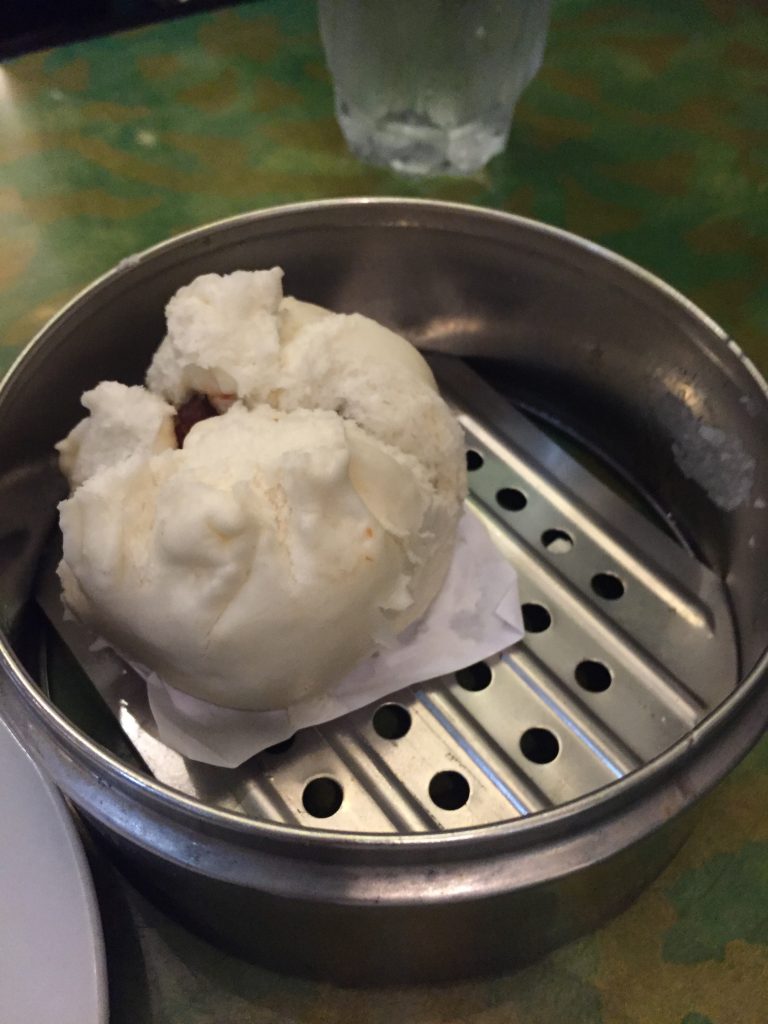 Quickly following was the wu gok taro dumplings that I got from the next passing cart. Taro dumplings are the best, not for their taste or the skill involved but because they are so, so weird. They look like funnel cake, with a delicate, flaky exterior that hides the soft purple taro and savory pork, the combination of which has entirely contradictory and inexplicable flavor profile. Rest assured, they were delicious.

Because of the fast-paced and basically menu-free style of eating, it can be difficult to know exactly what you’re selecting off of the dim sum cart. After getting my start in dim sum in Hong Kong, I am basically shameless in my inability to speak Cantonese and in asking about whatever dishes I do not recognize. After all, you might end up with something like fung zao, for example: fried, steamed chicken feet. (With almost a decade of dim sum under my belt, I still cannot bring myself to try them.)

By the time we had arrived at the final, dessert dumpling stage, my brunch companion and I were totally stuffed. But the best part of dim sum is the dessert, because it never is too cloyingly sweet, as western cuisines often are. We ordered jin deui with a pineapple-flavored paste, which are fried rice balls that have a thick, sesame coated exterior. Imagine the contrast between fried, Southern cuisine in the U.S. and Californian fare, and you can imagine how jarringly fried the jin deui are in contrast to the har gau dumplings.

I actually thought that the jin deui’s pineapple filling was the weakest part of our meal. It was pasty, but in an almost powdered sort of way. The pastry would have been much stronger had Mark’s Duck House stuck with the traditional red bean paste or lotus paste instead.

To top it all off, my companion and I shared the daan taat, a Hong Kong-style egg custard tart. For whatever failing the jin deui was, the egg custard tart redeemed Mark’s Duck House. It was perfection, with flaky crust and a delicately sweet custard center.

All in all, my companion and I ended up spending about $40 total for the two of us, and I ended up bringing home an entire meal’s worth of food with me. One could easily spend no more than $20 or $30 for two people, and still leave stuffed. If you can overlook the substantial feat of simply getting to Falls Church, Mark’s is a cheap and fun alternative to your traditional, basic, obvious and boring brunch. And don’t worry— there wasn’t a yoga mat in sight. 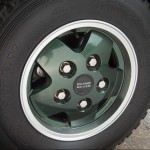 Riddle Me This, Riddle Me That: Who Still Cares about the Grumpy Young Bat? 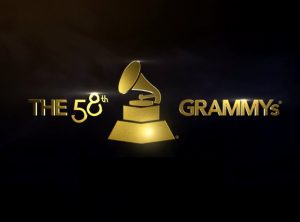