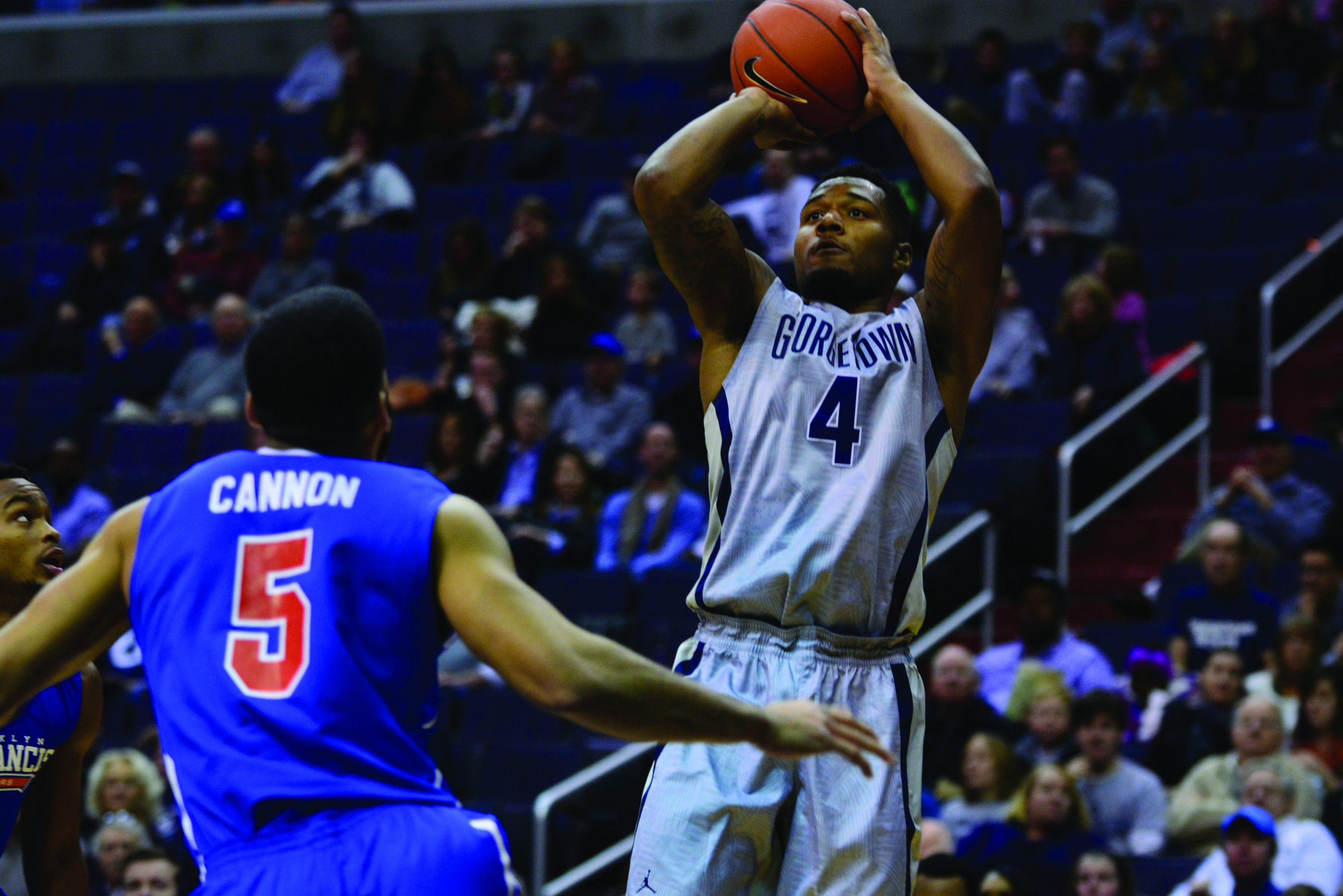 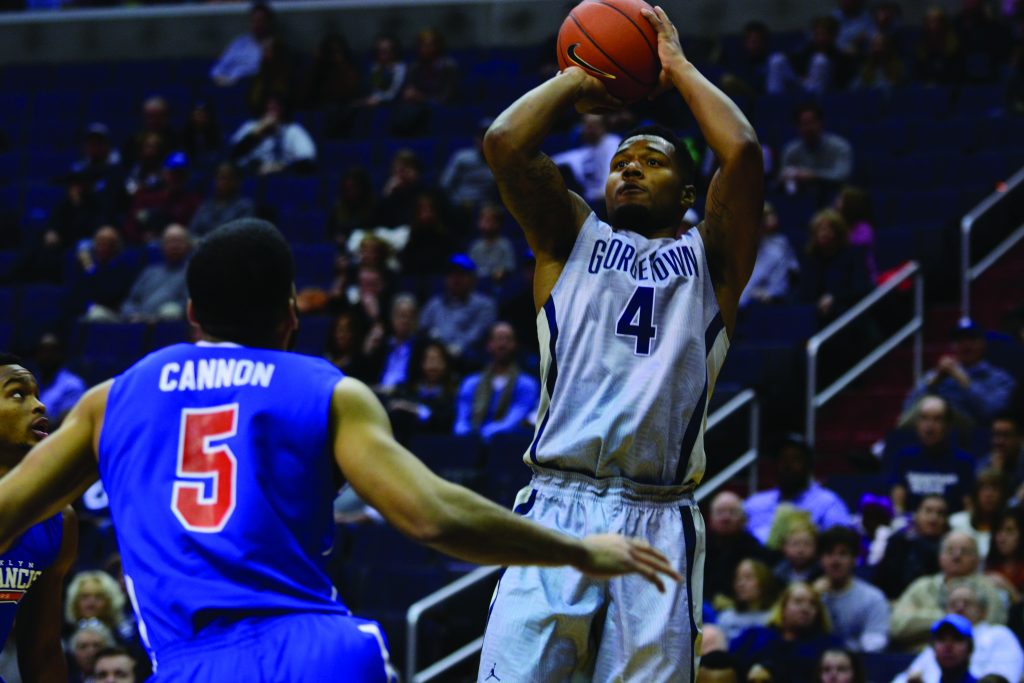 John Thompson III looks tired. He could be tired because he is the head coach of a program which could face three ranked teams in the first ten days of its season. Or maybe it’s because it’s been eight years since his team last reached the Sweet Sixteen. Either way, Thompson and his Hoyas have the expectations of a downtrodden fan base on their shoulders as they get closer to the beginning of one of the toughest schedules in college basketball.

The Hoyas ended last season with a loss in the second round of the NCAA Tournament, the program’s best result since 2012. Yet, on the Hilltop, where players and fans alike will always expect a deep postseason run, this result was underwhelming. For these Hoyas, none of whom have played past the first weekend of the NCAA tournament, winning in March is already a pressing concern.

“It’s something that I’ve thought about since my freshman year,” said senior guard D’Vauntes Smith-Rivera. “We were top five in the country, expected to do great things. Up until this point, I just want to continue to get better and continue to help guys understand what it takes to win and what it takes to get past that first step.”

The path to taking the next step started for the Hoyas long before practices began this fall. After the end of last season, Smith-Rivera, who was expected to be the leader for the Blue and Gray during his senior season, declared for the NBA Draft. Though the Indianapolis native wasn’t projected to be selected to the NBA, it was assumed that he would play overseas. However, within a week Smith-Rivera had a change of heart, and decided to return to the Hilltop for his last year of eligibility, a welcome development for Georgetown fans and Smith-Rivera’s teammates.

“It was great. Like I said before, D’Vauntes is more than just a basketball player on the court for us. When he’s on the court and things are going down, we kind look to him like ‘What’s next?’ He’s one of the best players in the country, so just having him on the court with us is a confidence booster,” junior forward Reggie Cameron said.

While Smith-Rivera is sure to give the Hoyas leadership learned from three years of court time, the departure of last year’s seniors Joshua Smith, Jabril Trawick, Mikael Hopkins, and Aaron Bowen, and the season-ending injury to sophomore transfer Akoy Agau leaves the Blue and Gray without many regular frontcourt contributors. In their place will be freshmen Marcus Derrickson, Kaleb Johnson, and Jessie Govan.

Derrickson, a native of nearby Bowie, Maryland, a beefy 6’8” forward with a “mean streak,” is expected to contribute in the post and on the perimeter for the Hoyas. During the summer and the fall, the freshman has impressed his teammates with his preparations. 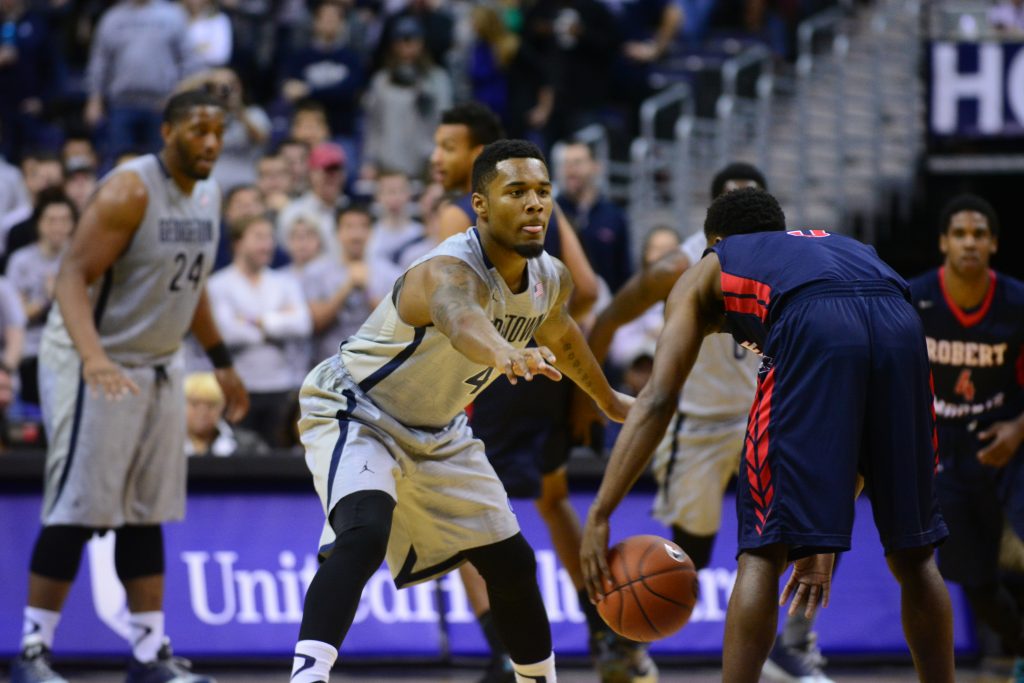 Derrickson, at 250 pounds, is far from fitting into the recently created mold of the wiry Georgetown swingman. This extra weight will hopefully allow the Virginian to make much-needed contributions in the post where skinnier forwards like sophomores Isaac Copeland and Paul White are usually pushed around while also spreading the floor when necessary.

Johnson, a speedy 6’6” guard also drew praise from his teammates and his coach for many of the same qualities that made Trawick a valuable contributor during his tenure on the Hilltop.

“Kaleb brings a lot of things to the table that Jabril did in a different way. He’s got a hardness, a toughness. He makes hustle plays,” said Thompson. “He’s one of our better defenders and can guard multiple sizes.”

“I didn’t know Kaleb was a guard, but he’s been playing strictly guard since he’s been here,” said Copeland. “That’s kind of scary, he’s like 6’7” or 6’8,” playing guard the whole time, seeing him being able to use the ball screens, guarding everybody, and getting to the rim like he does.”

Govan, however, is the Hoyas’ most prized recruit. At 6’10”, the center is expected to be a high-volume scorer in the post who will open up the floor for the team’s many shooters. His size will be needed when the Hoyas have to deal with top flight big men like Maryland’s Diamond Stone.

“Jessie is going to allow us to do some things that we haven’t been able to do in a while,” said Thompson “He’s a big, rugged kid that can go down in the block and have success.”

Though the Georgetown roster’s future looked bleak after Smith-Rivera’s declaration a few months ago, with his return and the supposed skills of the incoming class, it looks as if the Hoyas will have many players who can be depended on to play important minutes, if nothing else.

Bradley Hayes does not look tired. In fact, for the first time at media day, he looks excited.

The senior has spent much of his Georgetown career as an afterthought. He’s heard it all: too slow, too clumsy; but in last season’s penultimate game, Hayes made a statement. In ten minutes of court time, the center scored eight points and pulled down six rebounds, both career highs. For those who worried about the Hoyas’ frontcourt future, this was not necessarily a sign that Hayes was ready to be an offensive cornerstone, but a glimmer of hope that the seven-footer was ready to start stepping onto the court with regularity. Now, with the team needing him to play significant minutes, by all accounts, Hayes is ready to play.

“Our expectations of Bradley are very high. Seeing his growth over the summer, it was tremendous, man. I’m excited to be playing with him finally, consistently, as a peer and a brother of mine,” Smith-Rivera said.

Hayes and Smith-Rivera are now team captains. Smith-Rivera’s appointment was a no-brainer, but given Hayes’ lack of in-game experience, his role as captain seems questionable. Some wonder if the captainship is being used as a motivator to push Hayes toward larger contributions, but Thompson emphasizes that this is not the case.

“He earned it. It would not make sense to put anyone else in that position,” Thompson said. “It’s how he’s gone about his business, the leadership that he’s displayed. And I mean as much off the court and in the locker room as what’s happened on the court. That being said, being quite honest, he played well in the NCAA tournament, and he hasn’t stopped, so it’s kind of like an ‘aha moment.’”

Last year was more of a learning experience, like just growing, watching the older guys. This year, I have one year underneath my belt. Basically, I’m more of a teacher, more vocal this year. So, I’m definitely seeing my role change from this year compared to last year,” Copeland said.

This sentiment was echoed by fellow sophomores Peak, White, and guard Tre Campbell. The Hoyas will need their sophomore core to be playing their best as they begin their schedule with matchups against some of the strongest and most historic programs in college basketball. After their season opener at home against Radford, the Blue and Gray will travel to College Park to face No. 3 Maryland, which sports its most promising roster in years.

“Yeah, I mean it’s the talk of the town right now. I’m excited for it,” Smith-Rivera said. 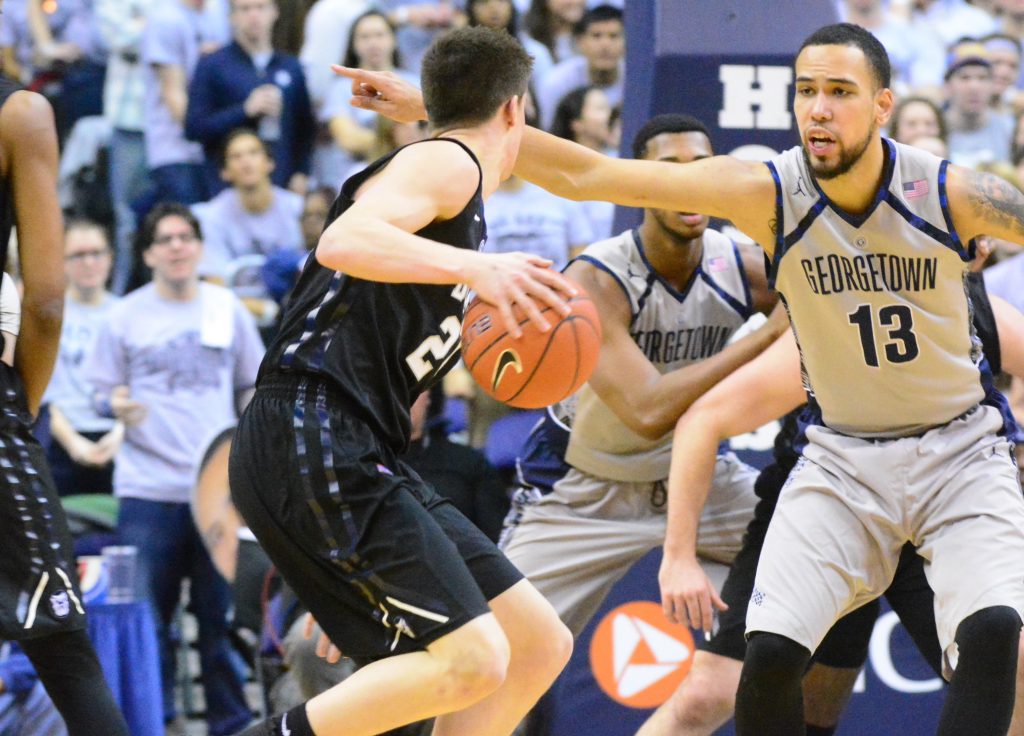 This early season test is a chance for the unranked Hoyas to prove themselves as a national contender, but also possesses the potential to be the beginning of a hell week for Georgetown. Three days after the matchup with the Terrapins, the Hoyas will travel to New York City to face No. 17 Wisconsin as part of the 2K Classic, an early-season tournament. On the other side of the four-team bracket are VCU and No. 5 Duke.

“I felt like we all looked at it at the same time and looked at each other and just kind of grinned…Wisconsin at the Garden, possibly Duke after that. We’re excited. We look at it like an opportunity to make a lot of noise early this year,” Cameron said.

This year will also bring back two of Georgetown’s old Big East rivalries, with Syracuse coming to the Verizon Center on Dec. 5 and the Hoyas traveling to face No. 20 Connecticut in January.

If the Hoyas are prepared, this daunting out-of-conference schedule could be a springboard to the national spotlight. If Thompson and his players are right, fans should expect the Hoyas to hang with all of their top-tier opponents.

But, the season hasn’t started yet, and optimism is everywhere, whether or not it is warranted.

Georgetown buys into the strength of its basketball program unconditionally. There was a time when the Hoyas were the most respected team in college basketball. That is no longer the case. Away from the Hilltop, reverence is in short supply, and there are many teams who have performed more consistently than the Blue and Gray.

The Hoyas have what seems to be one of their most complete rosters in recent memory to go along with one of the country’s most difficult schedules.

If Georgetown is a national powerhouse, it’s time to prove it. 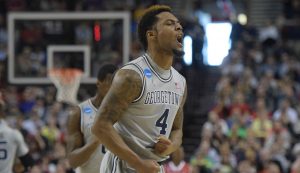 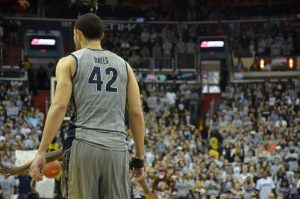