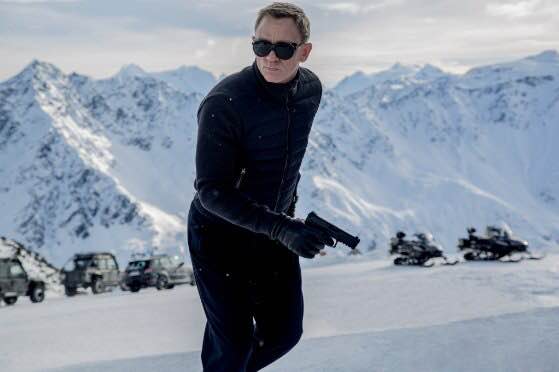 Spectre opens with James Bond sporting a skeleton suit, weaving in and out of a chaotic Day of the Dead celebration in Mexico City. His outfit changes many times over the next two and a half hours, but the idea remains the same: Bond, stripped down to his core, navigating unruly circumstances as enemies close in from all directions.

The success of Skyfall (and Daniel Craig’s first two outings as Bond), coupled with Craig’s repeated hints at being done with the franchise, brought an unprecedented amount of popular hype in the months leading up to Spectre’s release. For Craig, and director Sam Mendes, the latest 007 outing meant facing the daunting task of living up to immense expectations. They have done just that, utilizing the same brooding tone that defined their previous collaboration.

The story is refreshingly simple, tracking Bond from Mexico City to Rome, Austria, and beyond as he tries to unpack the puzzles that have plagued him since the events of Casino Royale. After the death of his beloved M, Bond stays rogue, working outside of a rapidly changing intelligence system. Fulfilling M’s dying wishes leads Bond to the mysterious SPECTRE, a shadowy power hell-bent on seizing global control through state-of-the-art surveillance systems. Meanwhile, MI6 and the 00 program struggle to stay afloat under the leadership of the newly appointed Head of Joint Intelligence, Max Denbigh (played with ominous smugness by Sherlock’s Andrew Scott). The ensuing chaos sends Bond all across the globe, with his professional and personal lives clashing and teetering towards the brink at every turn.

First and foremost, Mendes has produced another visually stunning film. The action sequences, ranging from hand-to-hand combat on helicopters to sledding a plane through the Alps, mix the fun absurdity of Bond lore with remarkable effects made possible by today’s film technologies. Mendes maintains Skyfall’s grim lighting for much of the film, mirroring Bond’s own dive into dark, perilous places. This gives the movie a gritty weight reminiscent of Nolan’s Dark Knight trilogy and its derivatives, an effect present since Casino Royale but enhanced here more than ever. Spectre also mixes in a pleasing amount of nostalgia, alluding to and subverting several familiar Bond motifs. In one memorable scene, Bond is refused his signature martini; the spot does not serve alcohol. In another, Christoph Waltz’s Oberhauser responds to Bond’s “I came here to kill you” with “And I thought you came here to die,” surely hinting at the iconic moment from Goldfinger. There are, of course, Aston Martins and useful gadgets, handed out by Ben Whishaw’s still-delightful Q. Mendes’ film continues to cement the newer, tougher Bond archetype, but never stops showing his admiration of the films and devices that got the character to this point.

As in every Bond outing, new characters can define the film’s success, and here many leave lasting impressions. Waltz is unsurprisingly great, wielding his trademark toothy smile and well-paced creepiness without venturing into the complete goofiness of his Inglourious Basterds and Django Unchained roles. His accent plays perfectly on screen: “You are a kite dancing in a hurricane, Mr. Bond” sounds especially menacing coming from the German-Austrian’s mouth. Scott’s Denbigh is also a fascinating addition, though it feels like the character could have benefitted from more screen time. Perhaps most pleasing, though, is the arrival of an impressive Bond girl, in the form of Lea Seydoux’s Madeleine Swann. Seydoux (known for her performance in Blue is the Warmest Color) brings an intelligent energy not seen in many of her predecessors. The daughter of an assassin, Swann challenges Bond’s charms to a comical extent. Their relationship feels rushed and unconvincing at times, an understandable flaw given the necessary build-up of the story’s first hour; one wishes they had more screen time to establish exactly why she means more to the agent than his numerous prior conquests. Nevertheless, Seydoux brings far more than a pretty face to the film, with her character invested just as deeply in SPECTRE’s crimes as Bond. Seeing a powerful female figure stand by 007’s side as an equal makes the film a more dynamic and realistic expansion of the franchise.

Spectre is by no means flawless, succumbing intermittently to its own broad scope. The plot plods in some moments but in a forgivable manner, given the intertwining narratives of Bond, SPECTRE, and British intelligence all requiring attention. As is the case with most Bond films, Spectre is predictable, but the intensity of the movie’s climactic moments more than make up for their lack of shock value.

Questions regarding the franchise’s future are unavoidable given Craig’s recent comments and the finality of some of the film’s moments. For many, Spectre could act to cement Craig’s place as the best Bond of all time. Valid arguments of course exist for Sean Connery (and no one else, really), but Craig’s resolute portrayal fits perfectly into this moviegoing era, one defined by dark heroes like Christian Bale’s Batman. That the 00 system is in danger of extinction is fitting; Craig’s Bond has always had to work outside the bounds of the system, but this rogue nature never seemed sustainable beyond the story arc first presented in Casino Royale. Craig (likely) closes his tenure as 007 with a bang, leaving the franchise in a tenuous position, firmly implanted in the blockbuster zeitgeist but without the superstar who put it there.