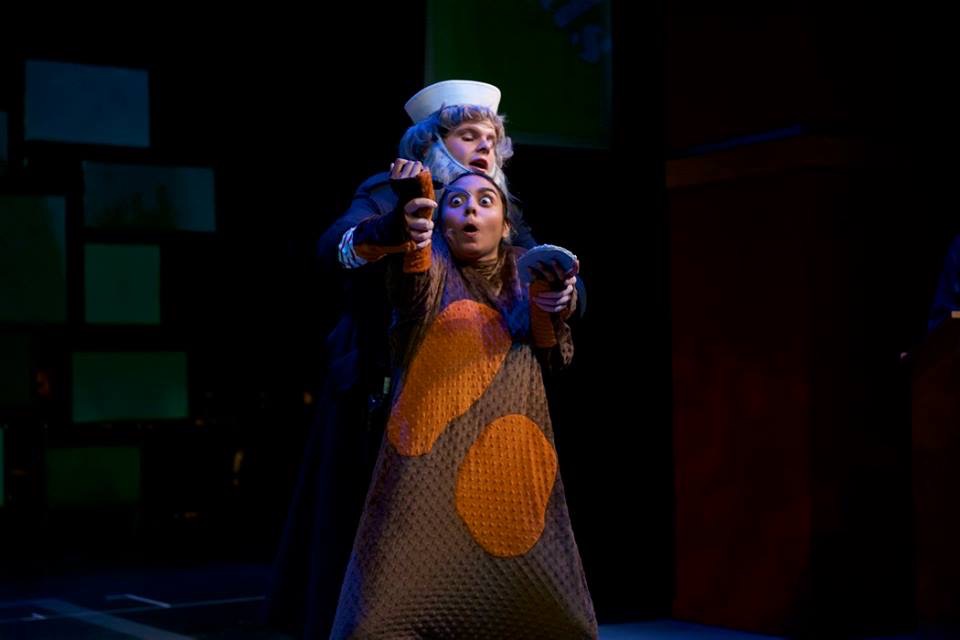 Celebrating their 10-year anniversary, Georgetown’s Department of Performing Arts launches its season with a world-premiere adaptation of Karel Čapek’s novel War with the Newts. Čapek’s original work, published in 1936, sounds like the quintessential science-fiction horror story: man discovers rare and intelligent newt race, man enslaves and exploits newts, newts outwit man and commence global war for supremacy. It would be natural for one to be skeptical of an on-stage adaptation; War with the Newts could have easily strayed into the obscene and the absurd, with Godzilla-sized newts toppling buildings and causing natural disasters in order to gain access to the shallows. After all, newts cannot live in the deep oceans — they thrive close to shore, where they can lay their eggs and dance in the light of the moon.

Thankfully, the department’s adaptation of War with the Newts avoids falling into the sci-fi trap. Through the usage of technology such as projections and pre recorded films, special effects, and several other mediums, Professor Natsu Onoda Power’s production turns the horror-esque tale of the newts into a light-hearted, yet thought-provoking performance.

Here, the history of human and newt interaction is narrated by Greg Onago (SFS’16) via a television or radio program that “makes Newt news.” Performed in front of a live audience — allegedly a mix of human and newt viewers — the show is intent on clarifying where both races are at fault in their now tense relationship — and insisting there is still time to fix it before anyone else suffers.

The story opens with the discovery of the newts by Captain Van Toch, played by Johnny Monday (COL’18), and works its way to the present day. The presentation includes news documentaries, interviews, panels, “live footage” of experiments, and even musical numbers written by J.D. Salamander himself (naturally, a play off of J.D. Salinger — the audience should expect several newt puns throughout the production.) Through these various means of storytelling, the audience can follow along and find moments of levity within this predominantly dark tale. “Different forms of media trigger different emotions and memories and have different connotations, and that gives the play a serious emotional range,” wrote Taylor Rasmussen (COL’16) in an email to The Voice. “And hopefully [the mediums] helps the audience experience that range.”

This leaves the ensemble of War with the Newts with a daunting task. Each cast member takes on two or more characters, changing costumes and accents rapidly before stepping into the next role. Yet each actor successfully leaps from one player to the next, convincingly moving the story along as the relationship between man and newt grows complex. Monday, for example, sheds his beard and sea-captain accent within a millisecond to emerge as a hardworking newt, while Rasmussen transitions immediately from a newt schoolgirl learning English to Andy, the first speaking newt whose story the audience hears through  musical adaptation.

Along with portraying several different characters within Newts, the ensemble also has to remain in sync with the several technological features throughout the production. In one scene, the newts have to keep in time with underwater projections during a dance sequence, staying in rhythm with both one another and what’s occurring on the screen behind them. “I think the technology is a must have for a show like this,” wrote actress Michaela Farrell (COL’18) in an email. “It is so out there and so far beyond realism that the projections are a necessity. They bring so many things to life… [elements of the show] really depend on the technology to show how small the newts are in this big world.”

“Tech provides opportunity, and it can be challenging to nail down the required timing and precision sometimes,” wrote Rasmussen. “But it’s always worth it.”

Yet the real question that arises from War with the Newts is the audience’s perception of the conflict: are we supposed to sympathize with the newts, the humans, or both? Of course, the audience can certainly pity the newt’s exploitation — G.H. Bondy, played by Ben Lillian (COL’18), and his corporate cronies devise a system to breed and sell newts called the Salamander Syndicate. While slavery certainly merits some form of rebellion, it rapidly devolves into violence, with newts causing natural disasters and killing human civilians. While some newts advocate for all-out war, others remind their companions that humans taught them “everything we know.” Andy the newt only learned how to speak English through her human zookeeper, Thomas Greggs, played by George Prugh (COL’17). There is even a push for newts to receive proper human educations, manifested in the scene between the newt schoolgirls and their human professor, Madame Zimmerman, played by Jordanna Hernandez (COL’16). Is it truly fair that the newts should turn upon the very race that gave them the knowledge to thrive? Surely, the Narrator argues, there must be a more peaceful way to settle the tensions of the past.

“Telling the story from a Newt perspective is a twist meant to allow the audience to sympathize more with the Newts, than they would if the Newts were less personal,” wrote Prugh in an email to The Voice. “However, I don’t think the twist is meant to make the story one-sided.  The audience should feel a certain amount of ambivalence about who they sympathize with.”

The Department’s adaptation of War with the Newts successfully blends several mediums to convey a twisting, thought-provoking narrative that will make audiences both laugh at and ponder the performance’s central themes. Though they may be small and cute, these newts may help today’s audience see his fellow man — or newt — in a different light.