Carolina Panthers: From Underdog to Favorite 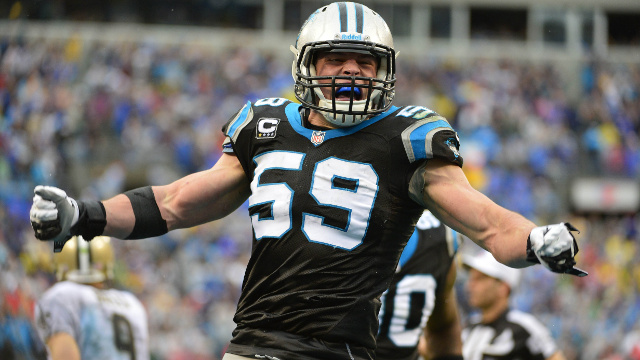 The Carolina Panthers have been one of the biggest surprises of this year’s NFL season. They finished 2014 with a record of 7-8-1, yet somehow won the NFC South and made the playoffs despite holding a losing record. I suppose snagging a playoff berth and winning their division wasn’t that bad of a season, but the transformation from 2014 to 2015 is certainly notable nonetheless.

The Panthers are entering Week 11 with a record of 9-0 and are one of two unbeaten teams (the New England Patriots being the other) in the NFL. It’s a huge step up from last year, but how has Carolina done it?

When analyzing only the Panthers’ statistics, they do not look the part of a top NFL team. They’re averaging only 352 total offensive yards per game, good for 16th in the NFL. Their defense is giving up 338 yards per game, 10th best, and has only sacked the opposing quarterback 18 times so far, which is the 18th best pass rush in the league.

The Panthers’ seem to have finally given former number one overall draft pick Cam Newton some flexibility in their offense, and it has paid huge dividends. Offensive Coordinator Mike Shula is running a type of hybrid no-huddle offense that is tailored specifically to Newton’s unique abilities. The offense gets the team to the line quickly which allows time for Cam to make pre-snap reads and adjustments based on the defense’s alignment. It gives Newton a lot of power to audible away from the coaches’ play calls if the defense is lined up a certain way. Newton is audibling 30-40% of the time this year, up from previous seasons, and it has definitely been successful for the Panthers’ offense.

Newton, when audibling in and out of plays, is also calling his own number more often than ever. He is averaging 9 rushes per game, up from previous years, and has 366 total rushing yards on the year, good for 31st in the NFL, but 1st out of quarterbacks. He also has 6 rushing touchdowns, which puts him in a tie for 2nd place out of all NFL players. It’s no secret that if he is able to stay healthy, designed rushing plays featuring Newton can be deadly. At 6-foot-5-inches, 245 pounds, with a 4.8 40-yard dash time, Cam is a freak athlete. Giving him a chance to get the ball in the open field is a no-brainer, but because he has remained healthy this year, the Panthers have allowed Newton to run himself much more than in the past.

It is also not surprising that the Panthers’ defense has been so successful in preventing the opposing offense from scoring. They have two of the best linebackers in the league in veterans Thomas Davis and Luke Kuechly. Kuechly is averaging over 10 tackles per game and is ranked 30th in total tackles out of all defenders, even though he missed three full games due to injury. In the defensive backfield, cornerback Josh Norman is elite in pass coverage. Norman is 4th out of all defensive players in passes defensed with 14, and 3rd in interceptions with 4.

A huge change from last year that could explain the Panthers’ defensive success is their red zone defense. In 2014, their opponents’ red zone touchdown percentage was 61 percent; so the Panthers were giving up touchdowns 61 percent of the time their opponents entered the red zone, the 3rd worst ratio in the NFL. This year, however, the Panthers are only allowing touchdowns on 50 percent of red zone opportunities, good for 8th best in the league, a huge jump from last year.
So, what are the Panthers’ chances at finishing the season undefeated? Their remaining seven opponents hold a combined record of 31-34, which isn’t great. However, two of those games are against NFC South rival Atlanta, who is 6-3, and could provide a real test for Carolina. Also, the Panthers will have to travel to Dallas and face off with the 2-7 Cowboys, a team much better than their record shows, especially once they get starting quarterback Tony Romo back from injury. It won’t be easy, but the Panthers have handled their schedule so far. Before last week, when the Panthers were 8-0, CNBC gave them a 4.4 percent chance of finishing the season undefeated by using some number crunching and probability systems. It probably won’t happen, but I’ll be rooting for the Panthers, some kind of strange underdog-favorite combination, to pull it off.

Stats are a tad misconstrued. The Panthers have 26 sacks tied for 6th in the NFL. They have only given up 18 sacks, tied for 18th in NFL.

My bad on the stats- wasn’t my intention. Just a mix up. Also, to clear up the second part, I saw he has the ability to audible 70% of the time, but my 30-40% in the article is the statistic for how often he actually is audibling, not when he has the ability