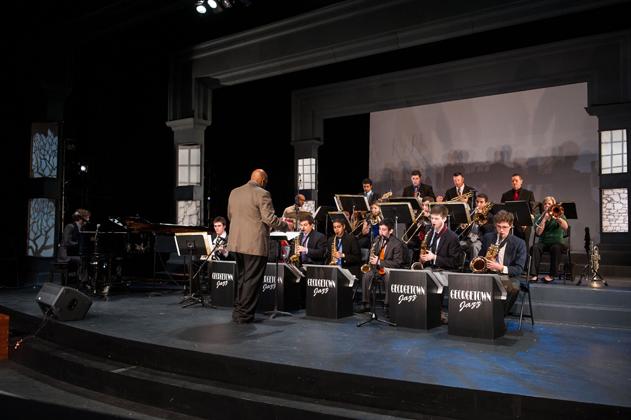 With its roots in the South, jazz was originally a blend of Creole, French, and African American traditions (now known as the New Orleans Style,) before spreading north to Chicago and New York. Despite several transformations, from big band to bebop, jazz has remained a steadfast American tradition, one that is still cherished, celebrated, and explored today.

Yet jazz has an unexpected talent: it is a genre able to rework and transform classics from other musical styles in ways many wouldn’t anticipate, lending its own coloring and complexities to a piece’s original sound. For example, who would have ever thought that Tchaikovsky paired with four-on-the-floor would sound so good?

The GU Jazz Ensemble explored these variations and improvisations during last week’s Winter Concert, playing excerpts from Duke Ellington and Billy Strayhorn’s The Nutcracker Suite, inspired by selections from Peter Ilyich Tchaikovsky’s famous ballet The Nutcracker. Led by Professor Aaron Broadus, the Jazz Ensemble selected five out of the nine variations of the suite, taking listeners to the smoother Land of the Sweets.

Throughout The Nutcracker Suite, Ellington and Strayhorn brilliantly shift between building off of original Tchaikovsky melodies and creating their own cast of sugar-spun dancers and performers. Listeners will feel right at home with the opening “Overture,” clearly a rendition of the original melody with a jazz flare. In “Sugar Rum Cherry,” too, listeners can easily detect the melody from the Sugar Plum Fairy’s dance. Yet instead of maintaining its sweeter sound, the original melody is taken down octaves and given more of a slower, swing feel. Suddenly the original Fairy has taken on a sultrier flare. While the variation certainly maintains its dance-like rhythm, it is now guided by a drum-line, requiring drummer Andrew Kirkpatrick (COL’18) to maintain a slow and steady hand so as not to throw off the rest of the ensemble. Such a challenging task was met with gusto, with each member of the ensemble executing this piece, and all others, with a sense of professional perfection.

“Peanut Brittle Brigade,” on the other hand, builds off of the famous March melody from Act One of the ballet, but it rapidly picks up the pace and infuses the piece with a big-band feel. Joel Epstein’s (MA SFS’16) enthusiastic trumpet solo covered a wide range on the scale, only lending more energy to the upbeat ensemble. True to the Nutcracker’s roots, each variation ends with its own final cadence and triumphant flare, as if signifying the end of a dance sequence. Other soloists, such as Chris Almeida (COL’16) on the soprano sax in “Toot Toot Tootie Toot,” were able to add their own voice in brilliant solo moments amongst the themes, pushing new life into the original works.

Along with The Nutcracker Suite, the Jazz Ensemble played other Strayhorn variations, such as the constant crowd-pleaser “Take the A Train” and slower melodies such as “A Flower is a Lovesome Thing.” The ensemble also included vocalist Leah Scholnick (COL’18) in some of these selections, whose warmer timbre and crooning style certainly lent an extra dimension to the performance. However, her discomfort with her lower register could certainly be heard in the acoustically unforgiving Gonda Theater, a space more suited for the spoken voice; nevertheless, the Ensemble behind her served as a constant partner and could pick up her sound with ease.

All in all, GU Jazz Ensemble’s performance reminded listeners of not only jazz’s crowd-pleasing techniques, with upbeat swing rhythms and brilliantly executed solo moments, but also its talent of transforming the old into the new, of breathing new life into particular classics. Perhaps this is part of the reason why jazz has remained a cherished American style of music, and will continue to be one for years to come.