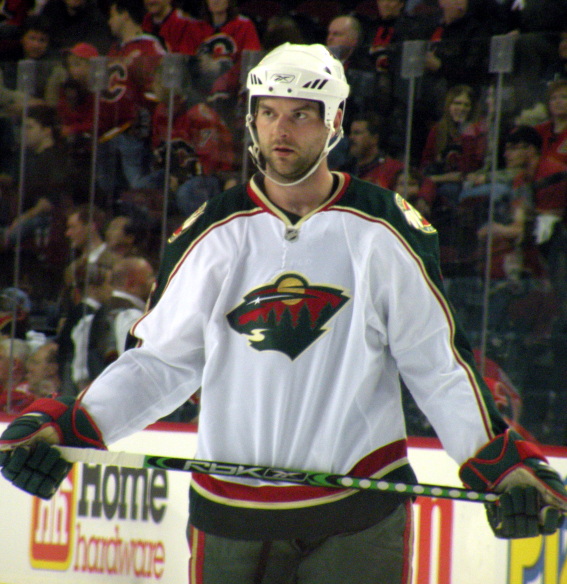 Scott while with the Minnesota Wild Credit: Wikimedia Commons

I have absolutely no idea what I will be doing the night of Sunday, January 31. Anyone who knows me will tell you that this is because I’ve never been one to plan a day ahead of anything, much less a week ahead. The reason I bring this up, however, is because this is the date of the 2016 NHL All Star Game, featuring a new 3- on- 3 tournament style of play. If I do decide to watch the game, which I generally find too gimmicky and meaningless, it will not be because of the new style of play. It will be because of the captain of the Pacific Division’s team: John Scott, a man who currently plays in neither the Pacific Division, nor the NHL.

To those of you unaware of Scott’s situation: don’t feel bad. The defenseman has racked up just 11 points in his 285 game NHL career, and if it weren’t for a group of merry pranksters on the internet, no one outside of hard core hockey fandom would have heard of him.

In 2015, the NHL announced it would  change the formatting of this year’s weekend long extravaganza. There would be a 3- on- 3 tournament involving teams from each of the league’s four divisions, and the fans would be able to vote for the four captains that led each team. Voting was online and unlimited. The idea made sense, and the voting made the league look good for allowing fan participation for a game that really should be all about the fans. What the league didn’t plan for was the movement to vote John Scott into the game. Spreading their message with the hashtag #VoteJohnScott, fans managed to make Scott the most voted for player in the league, launching the man into a position held by other captains Jaromir Jagr, Patrick Kane, and Alexander Ovechkin, all all- time greats. The fans, motivated by good- natured humor, decided to beat the league at its own game, and ultimately did what they were asked to do and set up the game that they wished to see.

The league was none too happy. Both the league and the Arizona Coyotes (Scott’s former team) asked Scott to not accept the position. Scott, who has two children and a wife pregnant with twins, had other plans. He wanted to take his family to enjoy the weekend, be a good sport in the humor behind his role as captain, and play with his teammates. This is exactly what should have happened, and now will happen, but not after the league embarrassed itself and proved once again that they do not care about their fans:  the people who buy the tickets, jerseys, and cable packages that pay the salaries of the front office leaders throughout the league.

On January 15, Scott was traded to the Montreal Canadiens in a move that the Coyotes GM said claimed to be unrelated to the All Star voting, but seems to be a little coincidental. The Canadiens immediately moved Scott to their AHL affiliate, the St. John’s IceCaps, with no sign of a promotion. The league then announced that this disqualified Scott from playing in the All Star Game. It seemed all hope was lost until the NHL finally bowed to pressure from the fans, allowing Scott to captain the Pacific division.

The entire debacle, while fun to watch, has shown just how ugly the NHL machine truly is. The lives of an entire family were changed and the wishes of hockey fans everywhere ignored for the sake of protecting the integrity of a completely meaningless game. Everyone involved came out the worse for it.

Let’s start with Scott himself, who had little to say in the entire episode. From all accounts, he is a genuinely good guy who was taking the whole situation pretty well. All he wanted to do was bring his family to watch him play in what would have certainly been a fun- filled weekend. He will still get to do this, at the cost of moving said family to an entirely new country just weeks before his wife is due to give birth to twins. What’s more, he is now in the minor league program of a team that has absolutely no intention of calling him back up, solely as a childish punishment.

The league also reared its ugly head in the direction of the fans, whose entertainment is the sole purpose of the league’s existence. A group of fans, clearly dedicated to hockey, wanted to see John Scott play in the All Star Game, and the league attempted to stop this because they would rather be killjoys than the butt of a joke. Perhaps this would make sense if it were the Hockey Hall of Fame or the All- Century Team. It’s not. Instead, it’s the NHL All Star Game, a game that serves to put some of the league’s best players and personalities out on the ice for the sole purpose of entertaining the fans. How and why is the league trying to defend the integrity of a game that will have no slapshots, no defense, and no real puck battles and that the NHL itself has cancelled twice since 2005 because of lockouts?

I still don’t know what I will be doing the night of January 31 this year. I can promise this, though: when John Scott goes out on the ice and shakes the commissioner’s hand along with the other captains, I will be watching. And when I look at the fake smile plastered on Gary Bettman’s face, my grin will be real.

Get Out of Town!