Sopranos, Strings, and Symphonies: What Lies in Shadow 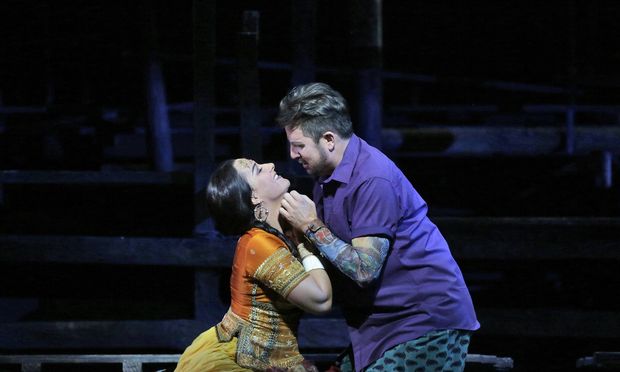 Before spending a night at the opera, I tend to research some of the production’s background information and context. Understanding the historical, political, and social implications of a performance, for example, allows audiences to discover subtle nuances and symbolism scattered throughout the work. If I’ve seen the opera before, on the other hand, I love relistening to familiar passages, or famous duets. Not only does it remind me of why I hold said opera in such high esteem, but also lets me look forward to the upcoming performance.

Yet I chose to quell my curiosities over the Christmas break before attending Bizet’s Les Pêcheurs de Perles, or “The Pearl Fishers,” at the Metropolitan Opera. I neither researched its context nor listened to its arias in advance. I, along with many, was instead intrigued by the mystique of this opera, chosen to commemorate the Met’s New Year’s Gala. After all, The Pearl Fishers has not graced Lincoln Center’s stage in approximately a century. Bizet’s renowned work Carmen, on the other hand, has been established as a repertory staple not only in New York City, but also worldwide.

Yet all I could ask myself once the curtains closed was why the Met had decided to abandon such a special piece so long ago.

It is certainly true that The Pearl Fishers has its flaws — but what opera doesn’t? It is true that one could critique the opera’s brevity and abrupt ending. One could argue that Bizet easily could have expanded the third act, both for musical content and additional character development. Such critiques, though, are not enough to condemn a piece to the operatic shadows.

Bizet’s lesser-known work transports audiences to a Southeast Asian village precariously situated by the sea. The plot is simple: two men — Zurga and Nadir — fight for the love of a chaste priestess, Leila. It is her responsibility to sing throughout the night to appease the gods, sparing the town from the unpredictable, turbulent seas. It is only when Leila reveals her love for one of the men (no spoilers) that the seas boil in rage, prompting the frightened villagers to sentence the lovers to death. Fortunately, all ends well.

Directed by Penny Woolcock, the Met’s debut mirrored a production led by Woolcock at the English National Opera in 2010. Here, tradition clashes with modernity; technology and bureaucracy attempt to take hold in the small rural village, where a majority of the chorus is reluctant to cast away their provincial garments and clings to their spiritual beliefs, choosing to weave and burn incense still under the large billboards and telephone wires scattered across the stage.

Modernity, along with a reliance on technology, fuels the production’s success. Acrobats “swim” through projections of water during the opera’s overture, demonstrating what an arduous and dangerous task pearl diving can be. The implementation of technology, too, helps to establish the sea as a formidable, almost secondary character. During the turbulent storm between Acts II and III, projections of roiling waters fill the entire stage up to the ceiling, portraying the sheer power and authority the sea has over the success — and survival — of the village.

Yet it is the music itself that imparts such a strong impression on audience members. Bizet’s Carmen is not only known for its soaring arias and chorus numbers, but also for the precision to detail within the orchestra. The Pearl Fishers, albeit Bizet’s prior work, shines in a similar manner. In true Romantic fashion, Bizet captures the exoticism of such a setting in his orchestration, relying on both minor keys and an emphasis on strings to transport listeners to this once considered ‘otherly’ realm.

Woolcock, too, had the pleasure of working with truly talented cast. Diana Damrau captivates as Leila, the beautiful yet innocent priestess who cannot separate love from duty. The soprano’s presence is utterly mesmerizing to watch, as her emotions are palpable not only through her voice but also through her physical motions. When excited to hear the voice of her love in the darkness, Damrau’s whole body quivers, matching her precise vibratos and clear timbre. It is more than evident that Damrau nurtures a deep connection to the characters she plays within her repertoire, particularly Leila. Throughout the opera, she successfully portrays Leila’s attempts to conceal emotion at every turn, yet with adoration bleeding through every note she sings.

The men are just as enchanting as Damrau. Tenor Matthew Polenzani’s voice impresses all audiences, particularly during his aria, “Je crois entendre encore,” as Nadir laments his inability to cease loving Leila. Polenzani’s ability to support stratospheric notes softly, while still portraying deep emotions of simultaneous love and despair, is astounding to both watch and listen to. It certainly helps that Polenzani’s timbre oozes warmth; drawing all ears towards his sound the very moment he opens his mouth to sing. His counter, baritone Mariuz Kwiecien, plays Zurga, the bureaucrat also in love with Leila. Kwiecien’s voice is commanding, demonstrating the power and authority he has over the whole village. Yet Kwiecien dominates not only in voice but also in body, using physical motions to emphasize the character’s deep internal struggle.

The two men immediately draw audiences into the storyline with the famous duet, “Au fond du temple saint,” where both gentlemen describe their respective memories of first encountering Leila. This duet, which has been performed by stars such as Pavarotti and Domingo on CDs, is even better to witness on stage. As Zurga and Nadir begin on separate sides of the stage, captivated by Leila’s image, they eventually join physically and harmonically, promising one another to cast aside the pains of love and to allow their friendship to triumph.

I could go on describing the beauty of Bizet’s The Pearl Fishers, manifest in its arias, its ensemble numbers, and its insightful production choices. Yet I cannot help but return to my earlier question: why did it take the Met a century to rediscover such a special piece of repertoire?

Under Peter Gelb, the Met has certainly paid generous attention to new productions, such as Nico Muhly’s Two Boys and John Adam’s Doctor Atomic. Some of these newer productions have not appealed to audience members, or even fiscally damaged the company’s budget. Yet the Met’s enthusiasm of debuting 21st century creations has not ceased. The company is also more than eager to perform operas in English, so as to render the genre more accessible to the masses.

But doesn’t the Met, along with other opera companies, have a responsibility to preserve the legacy of already existing operas? If operas are to put so much emphasis and effort to bring new works on stage, should they not look back within history’s archives and discover has been relegated to the shadows? In order to protect opera and guarantee its future success, we must be just as conscious to not only promote new composers, but to also protect those of old.

This could mean that audience favorites, such as Carmen or La Bohème, would not be performed annually at opera houses. Although this may disappoint some, this breath of fresh air could exactly be what large companies like the Met needs to attract new audiences, along with promoting new composers and productions. Works like Die Fledermaus, Manon, and Il Barbiere di Siviglia appear almost every other year, preventing other works from receiving general acclaim, or even recognition. And while these three works are certainly classics, a year or two hiatus would allow other shows to enchant audience members. Devoted listeners, I can assure you, will be the first to order tickets when their personal favorites return next season.

Furthermore, if the Met is adamant about holding onto tradition, then at the very least they must make their regulars as appealing as newer productions. Take, for instance, Cavalleria Rusticana/Pagliacci, or what is referred to now as the “indomitable double-bill.” It has become an established tradition to perform the two operettas during the Met season, and yet many critics this year were disillusioned by the performance, due to the director’s insistence on staging the operettas the same way, despite last year’s lukewarm reviews. On the other hand, The Pearl Fishers, which performed simultaneously with Cavalleria Rusticana/Pagliacci, received glowing remarks. If opera companies are insistent about traditions, they best make sure their audiences will not tire of seeing the same opera, year after year.

Perhaps we need to retire these classics, once in awhile, to give opportunities for other works to shine. The Pearl Fishers certainly has the potential, after all, of becoming an audience favorite; it just has not been given the proper amount of attention, the right amount of limelight, until now.
Let’s hope it’s not another century before this illustrious pearl resurfaces.