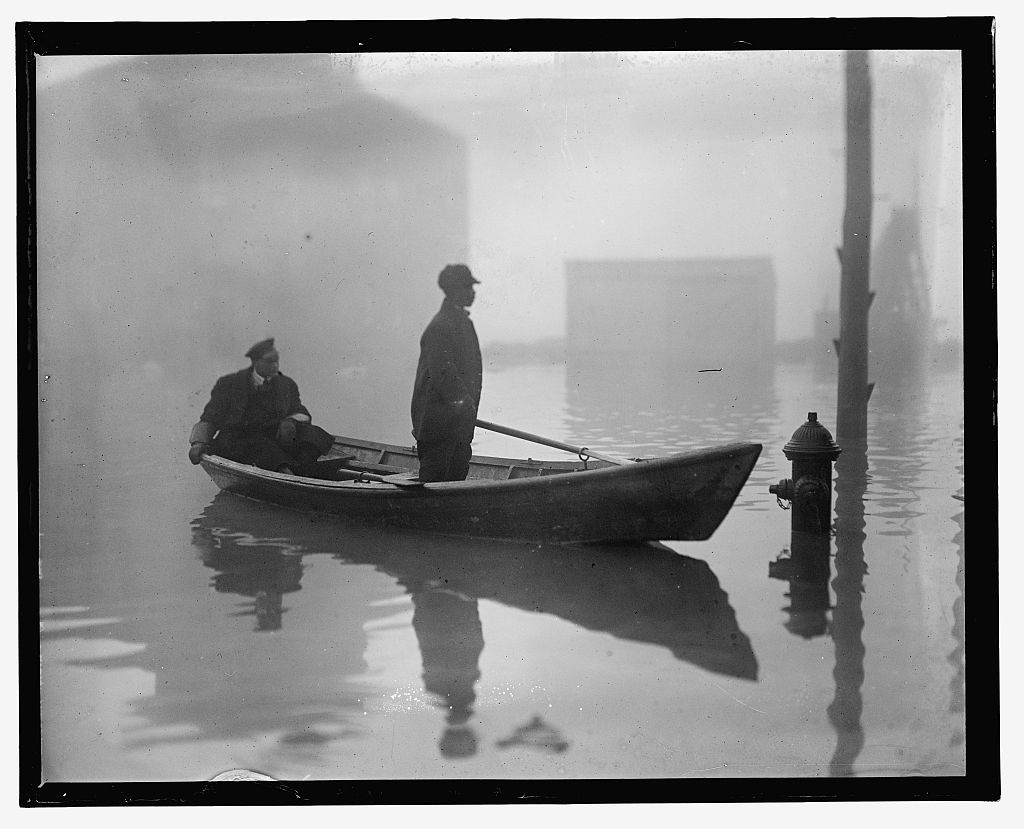 In 1957, the year Little Rock Central High School was desegregated, Sen. John F. Kennedy bought a house in the Georgetown neighborhood. Attached to the deed was a restrictive covenant: the house could never be “used or occupied or sold, conveyed, leased, rented, or given to Negroes or any person or persons of the Negro race or blood.”

At the time, Washington D.C was 54 percent black. Georgetown, where black people made up only 9 percent of the population, was a white community in a black city.

This was not always the case. Just decades before, the neighborhood had a different complexion. In 1930, Georgetown was 30 percent black. Even earlier, in 1880, 5,000 African Americans lived in the neighborhood, many of whom were former slaves.

The history of black Georgetown cannot be told entirely in numbers. In Black Georgetown Remembered, a book and documentary recently re-released on its 25th anniversary, it is told through the stories and recollections of Georgetowners, past and present, who knew the area as a lively and intimate black community. David W. Powell, producer and director of the movie, recognizes that the interviews must be taken as “factually inaccurate,” because memory is a tricky thing. Despite this, the interviews capture the narrative of the community as it is remembered: the burgeoning, the blossoming, and the dispersal.

The black Georgetown that comes out in interviews is a tight-knit social circle. “There were no strangers among the black community,” said Neville Waters Jr, in the film. “You not only knew which barbershop [someone] went to, but you knew who their barber was.”

It was a community that felt a responsibility to take care of its own. “I remember when my mother died,” said Ernstine Henry Green, in her interview. “But we had 20 mothers. Everyone on the block was our mother after that.”

Many of the stories center around Mount Zion United Methodist Church, the oldest black congregation in the city, and other black churches in the area. Others involve Rose Park, where residents remember playing as children. The tennis court was the second home of the Peters sisters, who went on to win 14 doubles titles in their later careers.

Today, Mount Zion, on the intersection of 27th and O Streets, still fills its pews with black parishioners, but many of them drive in from outside the neighborhood. Though the tennis courts have been dedicated to the Peters sisters, Rose Park is no longer filled with black children. By 1958, the eulogy was already being written. “No children,” said Charles Marshall III then, according to the book. “No Rose Park Warriors—no more. They’re gone. Don’t have enough people to play softball, to field a community softball team. Different time.”

Professor Maurice Jackson, of the History Department, African American Studies Program, and an Affiliated Professor of Music, moderated an event panel in Gaston Hall last Wednesday for the re-release of the book. When he opened the floor for questions, Jackson implored the audience not to focus on the decline of the community. “I’m as mad as anyone about gentrification,” he said. “But I restrain myself because this is Black Georgetown Remembered night.” The audience was filled with former and current residents of Georgetown, reliving the objects of their nostalgia with one another. Removal and displacement were soft-spoken undercurrents. Some anger seemed to bubble from the questioners, faced with the portrait of a community they feel was unjustly taken from them. Like Jackson, the audience members seemed to be trying to restrain themselves.

In 1920, Georgetown was an “independent and dynamic” black community, according to the book. The neighborhood boasted six black churches and hosted black-owned businesses, black doctors, and black social groups. Because of the lack of zoning restrictions, residents could start up small firms out of their own private homes. The gas lamplights scattered throughout the neighborhood were lit every night by a “patient, black old lamplighter, who is remembered by many as Jasper.”

The complexion of Washington began to change in the 1930s, under Roosevelt, as America’s federal bureaucracy grew with the New Deal programs. Scores of white federal civilian employees moved into the District.

These dilapidated but restorable Georgetown houses became attractive for new white Washingtonians. Before the word “gentrification” was even coined, the racial makeup of the neighborhood began to turn over. The dispossession of black residents from their decaying housing began under the mantle of historic restoration.

A report delivered at the 1936 Conference on Better Housing Among Negroes portrays the changes as a coordinated and conscious effort on the part of institutions. “The dispossession of Negro residents,” it claims, “is part of the redevelopment project, and it is jointly managed by the city’s leading realtors and their allied banks and trust companies … As a matter of policy, the lending institutions of Washington deny credit to colored people in regions being prepared for whites … Many Negro tenants have been evicted so that white owners could remodel and rent or sell to whites at substantially increased prices. And as the white developers have moved into Georgetown, they have covenanted it block by block with racial restrictions to keep any Negro from returning.”

Many blacks in the area did not own their homes, and renters were the first to be ousted. “It is very common for landlords to just flood the building or to cut the heat off,” said Jackson at the event. “It happens all over the country. It just so happens that Georgetown was the first area.”

A new District zoning law, the Alley Dwelling Act of 1936, was passed with the goal of razing alley houses. The black population of these alley houses found themselves displaced. Some of the houses were in fact not razed, but refurbished, and sold to affluent whites.

As government expansion continued to bring in white workers into World War II, the process of gentrification began to peak. The Georgetown Citizens Association (GCA) and Progressive Citizens Association of Georgetown advocated for the safety, sanitation, and well-being of the community. Their ranks were closed to African Americans. A 1945 report to the GCA characterized Georgetown as “a neighborhood where rich and poor, white and colored, living side by side, have no neighborly contact, share no civic interest.” The civic groups began to concern themselves with the “slum” conditions of their black neighbors, and how best to eliminate them. The number of black tenants in this decade dropped from 599 to 313. 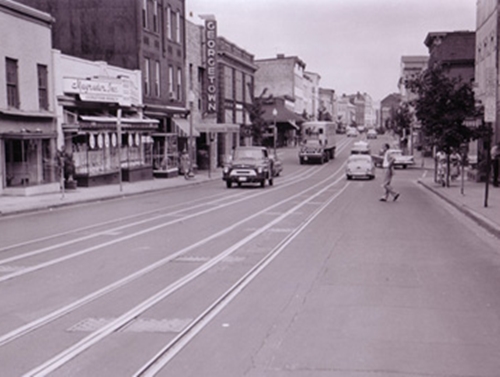 By 1950, it was estimated that black residents comprised less than one tenth of Georgetown’s population. The Old Georgetown Act of the same year was the final push out for those who were left. The act aimed to preserve and protect historic architecture as prices were climbing, but the associated bureaucracy of the process opened the door for further government discrimination. All remodeling had to be approved by Architectural Boards and the Fine Arts Commissions, who held the neighborhood to a new standard. Boarding houses were to be converted to single family dwellings.

“Many families simply could not afford to comply with new zoning restrictions and were forced out by renovation cost,” the book explained.  Valerie Babb, one of the authors and a former Professor of English at Georgetown, mentioned at the event that there were stories of agencies taking over houses, painting the porch white, calling it restoration, and selling the homes to white families. “Was it deliberate?” a questioner asked, referring to the gentrification.

“How do you define when someone sees they can make a profit and starts condemning buildings, so the people living there have to leave?” asked Babb, in response. “[Or] start raising real estate taxes so high that people can’t afford to pay them?” Yes, the panel agreed. It was deliberate. And Georgetown came to resemble the place we know today: quiet, affluent, and white.

October of last year saw the discovery of “Operation GroupMe” by The Washington Post. Georgetown business owners and retail workers used a group messaging app to report and describe to one another suspicious or “sketchy” activity in the neighborhood, ostensibly to prevent crime. The correspondence, which led to few arrests, faced accusations of racial profiling. Workers would share photos of black store-goers, with descriptions such as “rachet” or “suspicious,” telling others to watch out.

The incident seems to be a final underscore to the changes in this community. Decades ago, these streets where retailers report their black clients were filled with black businesses and a vibrant black community. “I’m very, very proud of my roots in Georgetown,” said Pauline Gaskins Mitchell, Georgetowner since 1908, on the film. “Every occasion that I have to mention it and to brag about it, so to speak, I do.”

The history of black Georgetown still tugs at those who lived it, even after all they have come through. There is the sense that something precious was lost. “I miss that part of my life,” said Eva Calloway to her interviewer. “We get along very beautiful now, but they don’t have that love that we had then.” 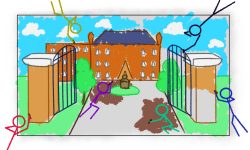 […] the turn of the 20th century, Georgetown was home to a thriving black community. Excluded from many other neighborhoods close to downtown by racial property covenants, black […]