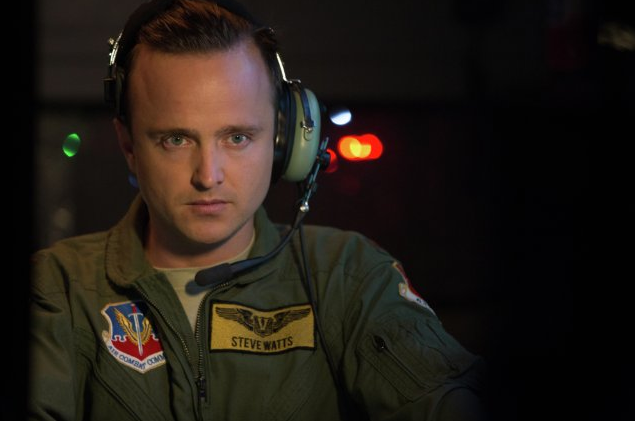 Eye in the Sky stars Academy Award winner Helen Mirren as a pragmatic, no-nonsense Colonel of the British armed forces as she coordinates a surveillance and strike operation with U.S and Kenyan forces against Al-Shabaab terrorists within the Kenyan capital. It is a short, but smart film, that pulls you to the edge of your seat as you hope that everything goes as planned, while forcing you to question the decisions made.

Helen Mirren is at the center of the film, but the work does not rest entirely on her performance. Instead, it is bolstered by its supporting cast including Alan Rickman, playing a British Lieutenant, who acts as the broker between the hawkish British military and its gutless political supervisors. Aaron Paul, famous for his portrayal of Breaking Bad’s Jesse Pinkman, finally proves his worth as a film actor as Steve Watts, a low-ranking American soldier who is assigned to control the armed drone during the entire operation.

Putting the film’s impressive cast aside, Eye in the Sky’s simple plot works beautifully. Each character is operating from a different location, yet their efficient coordination is reminiscent of the cogs of a wheel where one mishap clogs the entire machine. The operation’s strength in numbers is also its main weakness. Viewers get a first-hand look into how difficult it can be for multiple states to agree on a single course of action and how easily the political implications of actions can block sane military decisions.

Despite the controversy that surrounds the use of drone strikes, this film refuses to take a stance on the subject, presenting the views of both sides. The military act as hawks, and often disregards the possible loss of civilian lives in order to get the job done while British politicians try to minimize any collateral damage in fear of popular backlash. The heated debate between both parties informs viewers without favoring any side. To director Gavin Hood’s credit, it is quite rare for a film to act so impartially when facing such a contentious topic.

This is a great film from a relatively unreliable director. Gavin Hood’s previous film, Ender’s Game, was a moderate success with mixed review. X-Men Origins: Wolverine, his other commercial success, was extremely underwhelming and agitated a lot of Deadpool fans for botching the iconic character’s first cinematic depiction. Eye in the Sky is a step back from the big budget franchises, focusing deeply on internal character struggles, proving that he does have a future in Hollywood.

Eye in the Sky is a high tension film with a clever plot that leaves the viewer in cold sweats. The thriller is driven by its powerful cast, and it would be hard to find a better film to serve as Alan Rickman’s final goodbye. The film may feel like a clash of the military and sci-fi genres until one realizes that such astounding technology is the current face of warfare. As scientific developments progresses further and further, the most terrifying scenes of combat films may focus on beads of sweat and the push of a button over explosions and trigger fingers.

More: Eye in The Sky, Slider