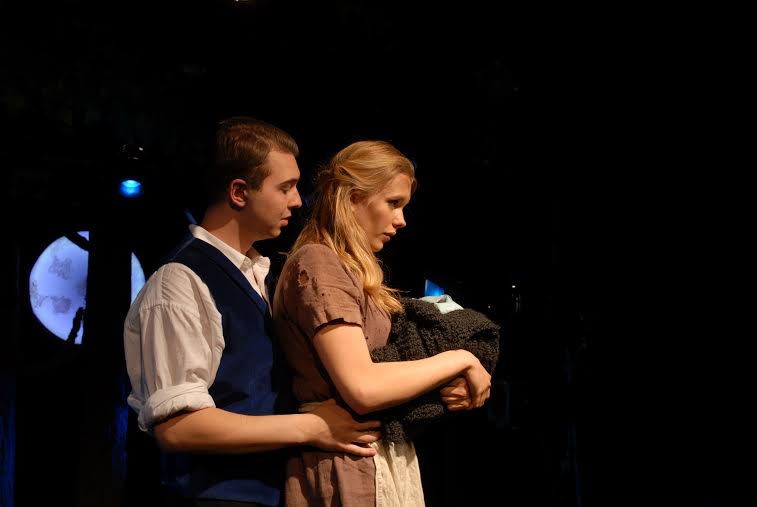 Not all fairy tales result in the “happily ever after” that’s expected. Today’s generations are generally exposed to doctored folklore of the past — where Little Red Riding Hood is freed from the wolf’s belly, where the little mermaid keeps her legs and marries her prince, and where Sleeping Beauty is awakened by true love’s kiss, not after giving birth to children in her slumber. Fairy tales were not originally intended to simply entertain. They were to teach important lessons, to impart good morals onto their readers and listeners, and to provide a means of bettering the younger generation.

Mask and Bauble’s production of Into the Woods, with music and lyrics by Stephen Sondheim and book by James Lapine, tackles the true purpose of fairy tales: can these classic stories simultaneously entertain and move audiences to deep thought? Can we truly learn something from these tales; not only about the struggles of these characters, but also about our own?

Into the Woods intertwines several Brothers Grimm and Charles Perrault fairy tales, from Cinderella to Jack and the Beanstalk. Each individual’s story, naturally, begins with a wish. Yet the original tales we’ve all come to know and love grow complicated when the Baker and the Baker’s Wife are sent to the woods at the witch’s behest to retrieve four objects in order to bear a child. Just when we anticipate the story to come to a close — each prince with his respective princess, each wish relatively fulfilled, the idyllic picture grinds to a halt at the appearance of a giant, who demands vengeance for the death of her husband. Suddenly, the trivial cares of the fairytale world disappear. Instead of fretting about the stroke of midnight, everyday questions finally arise: who is truly to blame? Who is truly good? Does happily ever after truly exist after all?

In the Broadway world, Into the Woods made a formidable impact after its 1986 opening. In a year dominated by Phantom of the Opera (1988), the production won several Tonys, including Best Score, Best Book, and Best Actress in a Musical. Yet perhaps a part of Into the Woods’ appeal is the realization that such a production is no easy feat to perform. As challenging as it is on subject material, Sondheim is acclaimed for his intricate musical passages. From constantly changing meters to heavy dissonance, the score is richly complex, demanding a particular standard of musical excellence that even professionals struggle to provide. Audiences can hear the orchestra and soloists performing in completely different rhythms and harmonies, creating a unique sound that is emblematic of Sondheim’s musical prowess.

In selecting Into the Woods, Mask and Bauble has certainly taken on a daunting task. Nevertheless, the troupe’s constant energy and enthusiasm shines through in this production, grabbing and holding the audience’s attention with the very first “once upon a time.” Johnny Monday (COL’18) guides the audience through this strange array of fairy tales as the Narrator, a character who attempts to provide stability and safety in the mystical world we encounter. Yet unlike most fairy tales, the Narrator is lost halfway through, forcing the characters to wander away from their respective fairy tales and meld stories in order to survive. “His [the Narrator’s] end in Act II… is representative of both the characters’ within and the audience’s necessary reaction to when things start to ‘stray from the path’” wrote Monday to the Voice. “When logical sense breaks down, and the stories you used to tell yourself (the fairy tales everyone has grown up with) cease to function in the face of a giant, you must change the story.”

Each actor brings an unique form of dynamism and energy that only helps to illuminate their character, from basic movements to facial expressions. Jack, played by Matt Beshke (SFS’18) wrote in an email to the Voice that character development went as far as thinking about how to cross the stage in a middle of a number. “It was definitely a challenge to add movement to our already complex parts and characters, but doing so did definitely allow me to discover more about my character,” he wrote. “For instance, if I was told to cross the stage during a song, I would wonder ‘How would Jack make that cross?’, and experiment with different steps, before finally finding one that resonated most with my perception of his childhood innocence and bewilderment.”

Each actor, too, brought an unique voice to the characters they portrayed. Maggie Bolas’s (MSB’18) warmer, broad timbre is essential for demonstrating the Witch’s character, a once beautiful woman cursed by ugliness when a man robs her of her magic beans. Bolas’ belting only adds more power to her solo, “Last Midnight” as she curses the characters she has encountered throughout the story, chastising them for their need to blame someone for their own mistakes.

Caroline Barnes’ (COL’19) vocal performance, on the other hand, only lends an additional element of endearment and tenderness to the Baker’s Wife. She is a figure of support and strength throughout the tale for various characters, encouraging her husband to be brave and to always fight for their family, even when she herself cannot be there to guide him.

Yet despite the loveliness in variety of voice types in this production of Into the Woods, it is evident that Sondheim’s work still provides a variety of challenges that can take years to master. Musical director Cate Calogero (SFS’18) wrote in an email to The Voice about just how hard it is to unpack and teach Sondheim’s music: “We would start each music rehearsal with just me and my assistant Cameron clapping or snapping a beat and we would speak through all the rhythms. Then we would learn the notes and then put the two together. Then I would play the accompaniment while Cameron tapped… to ensure that the actors were able to nail the timing of the tricky score.” Acoustically, too, Mask and Bauble faced difficulty. While some singers successfully projected, other’s voices could have used the assistance of mics, particularly during scenes where overlapping verses and rhymes resulted in the losing of words.  While there were also moments throughout the show that the members of the ensemble missed a cue, entrance, or found themselves offbeat with the orchestra, the amount of effort and perseverance the group has invested in learning the score is certainly evident and admirable.

Musical difficulties aside, Into the Wood’s ensemble joins together to create a heartfelt, moving piece of theatre. Numbers such as “No one is Alone” and “Stay with Me,” are sure to evoke the strongest of emotions. Powerful songs such as these, sung with conviction, allow the audience to realize that each fantastical character’s emotions and struggles are similar to our own. So much of Into the Woods is about the legacies we leave behind — what we choose to teach the younger generation and how to we ensure they are better off than we once were. Director Matt Grisier (COL’16) wrote: “[Into the Woods] focuses a lot on the “passing of the torch” from one generation to the next — the stories we tell our children, the problems we inherit from our parents and grandparents, and how we deal with those issues that have plagued our society for far too long. And the message the show leaves us with is that it’s ultimately our responsibility to build communities of supportive people who can act together to defeat our modern ‘giants’ and curses.”

Into the Woods has resurrected the original intent of fairy tales. Instead of merely being satisfied with a hollow “happily ever after,” characters and audience members alike are confronted to face the conflicts of everyday life, to stray from the path of the expected story to be told, and not to be afraid to get a little lost in the woods. After all “the woods are just trees, the trees are just wood.” Have no fear, as no one should.