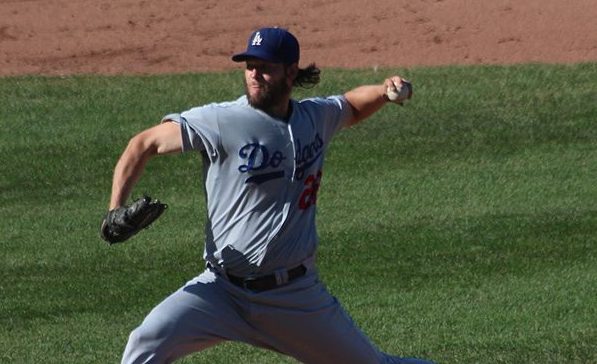 I’m sure you’ve thought it, at least once. Maybe October came around and your team was set to face the Dodgers. Maybe you and your friends were in one of those conversations that starts with “Who is the best pitcher we’ve been alive to see?” and ends with the meaning of life. Maybe you were simply acknowledging what we all know to be true, adding the mandatory addendum to any praise that the pitcher receives. I don’t know the context, but I’m willing to bet that, if you’re a baseball fan, the words “Clayton Kershaw sucks in the postseason,” have passed your lips at least once.

And as long as you said these words before Game 5 of this year’s NLCS, you were probably right. After all, it’s conventional wisdom that Kershaw, already one of the most dominant regular season pitchers in history, is a choke artist when the playoffs come around. Sure, a lot of those postseason losses are the fault of his bullpen, but when you’re as great as he is you should win, and win big, but that hasn’t happened much when Kershaw pitches in the playoffs.

But now, take that thought and hide it far away, because Clayton Kershaw is back with a vengeance.

The three- time Cy Young Award winner is in the eighth year of his very successful career, but no conversation can be had about the ace without discussing his team’s lack of postseason success, and the role he has played in their failures. He is by far the best pitcher on the team, and fair or not, most people will define his legacy by his ability to win in October. For all of his Major League career, the Texas native has been defined as the ace who can’t seem to get it done. But this year, it seems as though the pitcher won’t go down as easily, and certainly won’t sit by while baseball’s talking heads argue over just how good he is. This year, he’s going to show them.

Thus far, Kershaw has appeared in four of his team’s seven playoff games. This is an unbelievable workload for a starting pitcher. His first two appearances were starts in the Dodgers’ NLDS series against the Nationals. They were shaky, with 15 hits given up in the 11 ⅔ innings pitched. However, the Dodgers won both games, including a crucial Game 4 elimination match. What is most impressive, though, is how much work Kershaw has put into these games. In his first start, the left- hander threw 101 pitches. Then, pitching on only three days’ rest, he came out again and threw 110 pitches in that crucial Game 4.

211 pitches in three days is something that would tear an average person’s arm from the rest of their body, and would require an elite athlete like Kershaw multiple days of recovery. Such a strain on the body is not to be taken lightly, so when Dodger manager Dave Roberts announced that Kershaw was “absolutely not” available to play in that Game 5, no one was shocked.

Except, of course, Game 5 was different. By the end of the marathon seventh inning, which lasted one hour and six minutes, fans got a sense that something was up. And then the eighth inning came along, and there he was. Six foot three inches, hair sliding out of the back of his blue Dodger cap, Clayton Kershaw was warming up in the bullpen.

And when the time came, with the Dodgers holding on to a one run lead with one out in the bottom of the ninth, the 225 pound lefthander came out and recorded two brilliant outs to win the game. On the game’s final at- bar, Kershaw delivered one of his beautiful curveballs, the kind that seemed to be aiming for Nationals second baseman Wilmur Difor’s sweet spot, but ended in the dirt. Difor swung and missed, and after catcher Carlos Ruiz (the game’s other hero) threw the dropped ball to first base, ending the game and the series, Kershaw stood next to the mound with both hands raised, ready to be mobbed by his teammates. The look on his face said that something had changed inside of him, and that any and all future batters better beware.

Last night, Game 2 of the NLCS series between the Dodgers and the best- in- baseball Cubs, Kershaw proved unstoppable. He threw seven absolutely flawless innings, allowing only two hits, and it was clear that he had Cubs batters all sorts of confused as they watched strike after strike go by. Had it not been for the NLDS workload, he certainly would have gone on even longer. The Dodger bullpen was able to hold on for six more outs, and the series was tied at a game apiece.

There was a moment in the seventh inning, with two outs, when Dave Roberts ran out to the mound to potentially pull Kershaw. With a man on, the red- hot Javy Baez was up to bat for the Cubs. Kershaw has historically struggled in the seventh inning, and it seemed as though Roberts didn’t want to take his chances. The pitcher would have none of it. He could be seen in the huddle telling the team to leave him in, and the manager did, allowing Kershaw to show his stuff. When Baez hit a deep ball to center field, and the Wrigley faithful hopped to their feet, it seemed for a brief second that Kershaw had been beaten, that his past had caught up to his luck. But then the ball was caught at the warning track and the inning was over. Kershaw’s eyes were the same as when he recorded his save a game ago.

The Dodgers and their ace have a lot left in front of them. They are still facing the best team in baseball, who have their own depth on the mound, and have an offense filled with hitters that stand ready to strike at any time. And, for all the superhuman traits he has shown off this postseason, Kershaw can’t appear in every game for the Dodgers, as much as they’d love him to. The team is 4-0 when he appears, and 0-3 when he doesn’t. For the last few weeks, Kershaw hasn’t been on the Dodgers, he has been the Dodgers.

What he has shown this postseason is a toughness and dominance that will not be forgotten. Whether or not the lefty will acknowledge it, there is more at stake when he goes out to the mound than just the game. He is also pitching to define his legacy, to shake himself of the burden of poor playoff results, and he does not seem ready to go down without a fight.